Richard Rive, the contemporary of Es’kia Mphahlele, Alex la Guma and James Matthews was one of a golden generation of South African writers, artists, poets and thinkers. Born in the working class non-racial suburb of District Six in Cape Town he followed up his Bachelor of Arts degree from the University of Cape Town with a Masters from Columbia University and a Doctorate from Oxford. He was head of the English department at Hewat College of Education in Cape Town and a visiting professor at several overseas universities, including Harvard. A sportsman, non-racialist and  political activist, he also edited anthologies for the Heinemann African Writers Series and wrote three novels, including Emergency (1964) and Buckingham Palace District Six (1986). He was murdered at his home in Cape Town in 1989. In this excerpt from Richard Rive: A Partial Biography (2013), biographer Shaun Viljoen examines Rive’s sexuality:

One of Rive’s enduring friends was the artist Albert Adams. They met as fellow students at Hewat College, where Adams was a year ahead of Rive. Adams was much more comfortable with being a gay man at that stage than Rive was and accounted for the difference in the following terms:

I think even in ’53 I knew Richard was gay … Dennis Bullough was a gay chap who lived in Bree Street and he had a partner, John Dronsfield, who was an artist, and Bullough and Dronsfield kept a kind of open house for artists and the like. And Bill Currie was a close friend of Dennis Bullough, and if you knew Bill [as Richard did] you were invited to Bree Street … it was a group of gay people and, you know, if you were … there, you were gay … Already then I knew that Richard was gay; we all knew that he was gay. Although our gayness, I think, was a little bit more open than Richard’s. Richard had this macho-image of course, he was also a sportsman … So he was involved with sports and young people, and I suppose … I don’t know to what degree that also [kept] a halter on him to keep his gayness under cover … It would really not have, not have been accepted had he worked with young men, you know, on the sports fi eld … it was also simply part of Richard’s insecurity. I’m thinking … underneath all this kind of bravado, and this really extrovert, public image that he gave, I think there was a, a real sense of … insecurity on Richard’s part. I’m … almost sure about that.

Adams was one of the very few friends with whom Richard was open about his gayness, but even with Adams he was reticent about revealing any details of his private sexual affairs. Rive decided, it seems, not only to keep his sexuality an intensely private matter, but to deflect it by recreating heterosexual stances that could be perceived as indicating his ‘normality’. 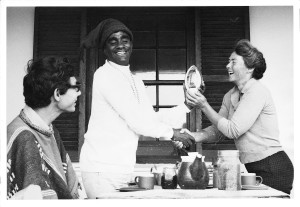 Writer Es’kia Mphahlele, who first met Rive in 1955 and became a lifelong friend and mentor, was bothered by Rive’s lack of family attachments and also wondered whether his father was from Madagascar because the name ‘Rive’ is so close to ‘Rivo’ or ‘Rivero’. Mphahlele also remembers that Rive did not relate to his brothers because they were not from his father. There was clearly a distance between him and his family, Mphahlele says, and Rive seemed to have cut all family ties, claiming he would leave his house to his nephew instead. Rive left his house to Ian Rutgers, who was not a relative but the man to whom Rive was extremely close for a long, long time. Ian lived in a room in Rive’s flat and then house for many years. He was the brother of Andrew Rutgers, whom Rive had befriended when Andrew was a young student of his. Rive became very friendly with the Rutgers family. Ian regarded Rive as a mentor and even father figure and did not or could not reciprocate the physical attraction Rive felt for him. ‘Nephew’, unbeknown to Mphahlele, was not indicative of a blood relative but was, instead, often a code word used by Rive for a young man he felt close to, and to whom he might have been sexually attracted or involved with, and whose presence he had to explain away, ironically by invoking conventional familial relations. Those of us who worked with Rive during his years as a lecturer at Hewat College remember being introduced, during suppers at his home in Windsor Park or on the sports field, to a number of his ‘nephews’ and many of us knew what that meant.

In a short story that partially fictionalises my attempts to create a biography of Rive, I focus on the attempts of the character called Richard to disguise the boys he surrounds himself with, and to whom he is attracted, as ‘nephews’. The story questions Rive’s silence and secrecy about his sexual life and his need to disguise real relations with fictitious familial ones. While Rive did on occasion consciously enact what Judith Butler calls ‘parodic replays’ of heterosexual convention, at other times he used these conventions to disguise his secret life as a homosexual man. These hetero-normative performances can be read as symptomatic of his deep yearning to be ‘normal’ – part of conventional, mainstream social existence and, as a sporty man, to assert what Adams calls the ‘macho image’. Yet at the same time these performances by Rive can be read as poking fun at these very conventions and their language.

Rive had numerous friendships with young men, often stemming from his keen desire to help the youth, especially those who came from poor backgrounds like he did, to realise their academic or sporting talent. A number of these friendships must have been sexually charged but remained clandestine and silent; perhaps these unspoken relationships were unintentionally encoded in Writing Black where he fleetingly describes these moments of taboo friendship with ‘the local guttersnipes’ in the poetic line which is also prophetic of the despair that marked his love life: ‘We used to sit in darkened doorways, and our silence was full of the hopelessness of our lives.’ While Rive here also notes that ‘discovery by my socially insecure family was fraught with danger’, he does not acknowledge, even in the most subtle or euphemistic way, that there might have been taboos other than crossing class lines that were implicated in his attraction to boys marginalised by conventional society. 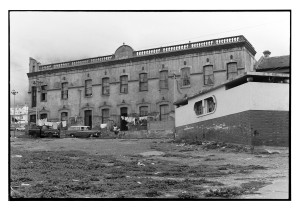 Despite the dominant thread of deep disaffection with family, Rive certainly had moments of intimacy with certain members of his family, which he hardly mentioned and rarely wrote about in his autobiographical writings. He seemed particularly close at times to his mother, as can be gauged from the rare references to her in his work and from the accounts of close friends. Georgina was the sister with whom Richard had most contact; the character of Miriam in his novel Emergency has shades of Georgina – the sympathetic, supportive and, significantly, ‘dark’ sister who never quite gives up on Andrew, in contrast to the hostile, fair-skinned sister, Annette.

Third Eye: District Six during Richard Rive’s time. The area, which was a vibrant multi-racial and cultural space was decimated by the Group Areas Act of 1950 (Photograph by George Hallett)