If there is a heaven for football fans I am fated to never make it. I have accepted my fate, an after-life in football hell, where I will face eternal damnation with all the works, including blaring vuvuzelas, the Carling Black Label Cup on rotation and the company of Luis Suarez.

For I broke the number one commandment of being a football fan: thou shalt not covet your arch-rivals’ team. But it’s not all black and white; damn this affection is messing with me. But I shouldn’t be judged harshly.  I am not and have never been a fan in the truest sense of the word, My support for Kaizer Chiefs didn’t come about in a conventional manner.  It was not love but protest.

It began on November 2, 1996 – a month and 29 days before I turned six years old – when Orlando Pirates thumped Amakhosi 4-1 in a Bobsave Superbowl semi-final clash. Pirates’ striker Jerry “Legs of Thunder” scored a hat-trick and Helman “Midnight Express” Mkhalele scored the other goal. I remember all the goals for Pirates but I don’t  remember how Chiefs’ consolation goal got in. I should have, then, pledged my allegiances to Pirates for such breath-taking was their display that day. But I didn’t, because of my father.

He was a staunch Pirates fan. And, just before the match, I had just had an encounter with his belt. I had fed our puppy and the neighbours’ dog some chillies.  Our neighbour, predictably, fumed. It was as if he was the one who  had eaten the hot chillies. After the spanking and in some form of dialectic I  chose Chiefs as my team.  I was protesting my punishment more than anything else. We watched the game at my neighbours’ house, also a Pirates’ fan. But you really can’t fool the heart.

A lot of this love had to do with the romantic Pirates’ stories handed down to me by my father. Like the famous one about Jomo Sono skipping his wedding’s reception to help the Buccaneers come from behind and beat Highlands Park 4-2 by scoring a goal and creating another. And the cool handles of  some of the players. There was Amos “Heel-Extension” Mkhari, Phil “Mr Jones” Setshedi, Patson “Kamuzu” Banda, Gavin “Stability Unit” Lane to Skhosana who went by the “Legs of Thunder” moniker.

I  saw only two of these players in action, Lane and Skhosana, but father spoke about them in a manner that I could see Mkhari’s precise back-heel, even executed from corner kicks. I could visualise Banda who had a monopoly on scoring at Buccaneers’ in ways reminiscent of Hastings Kamuzu Banda’s stranglehold over Malawi. But what fascinated me the most were the tales about the Ghost, the Pirates faithfuls, their attempts in 1994 to burn down FNB Stadium in protest against the referee. They also beat up coach Gordon Igesund at a training session as the club stuttered in their finish lap of the league title that they already had one hand on. I was in love but I was also stubborn.  So I stuck with Chiefs. 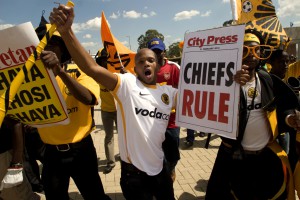 I loved the audacity of Chiefs,  the offspring  of Pirates, just like Jomo Cosmos. They have amassed the most number of titles in the country.  In his first spell Mushin Ertugral’s Amakhosi won every trophy on offer in the country except the league. They made up for that oversight with the Nelson Mandela Cup, now called the Caf Confederation Cup. Ertugral’s Chiefs is my favourite.

Kostadin Papic’s mesmerising Pirates side come second. The sight of their grey and white jersey scared every side that came up against them. My father would have been proud to watch that side, despite their failure, twice, to win the league. Two years after Papic left Pirates, in 2009, I watched my first football match at the stadium. For a football writer that’s rather very late for my first game. But I am the anti-social type for whom being in the same space with thousand strong throng  is terrifying.

My brother and friend, staunch Pirates’ supporters, were there as we watched the Sea Robbers sail past Thanda Royal Zulu with a 2-0 win. They were not my first choice companions to watching my first game. My father would have been but he passed away seven years ago.

Seventeen years after that magical game, on November 2, where I was introduced to Pirates, they will be in action in an even more important match. The final of the Caf Champions League against Egyptian giants Al-Ahly. I have been fortunate to see all their home games in the campaign, except Zanaco FC of Zambia’s return leg in the first round. I got to see another 4-1 drubbing, this time inflicted on the might Zamalek of Egypt. Ngidi senior must have slept that night in football heaven a happy man.

I would do anything for the opportunity to watch the home leg of the Champions League final at South Africa’s football spiritual home, Orlando Stadium, with my father. But I am sure he would have the best seat in the house, just like he did in 1996. A year before that game he celebrated Pirates being crowned African champions. His favourite player Skhosana, the one with the legs of thunder, striking the winning goal against Asec Mimosa of Ivory Coast.

Hopefully those who can make it to Orlando Stadium physically, will fill it up. Something that hasn’t happened in the tournament at Orlando Stadium.  On that day and maybe for that match alone I am going to be a Pirates fan. (Pangs of patriotism?) A fan first and a reporter second. After the two-legged final I will return to my hole and prepare for football hell after my afterlife. I belong in a place that Uruguayan writer and football fan Eduardo Galeano also visits.

“I have finally accepted myself for who I am,” Galeano writes, “a beggar for good football. I go about the world, hand outstretched, and in the stadiums I plead: ‘A pretty move, for the love of God.’ And when good football happens, I give thanks for the miracle and I don’t give a damn which team or country performs it.”

Main Picture: Orlando Pirates fans gear up for last week’s Soweto Derby. The Sea Robbers, who come up against Egypt’s Al Ahly in the first leg of the CAF Champions League Final on Saturday are the only South African team to be crowned continetal champions

Second Take: The writer’s preference for Pirates’ Soweto rivals, Kaiser Chiefs, was a response to his father