One way of looking at Anglican Archbishop Desmond Tutu’s words at the end of the farcical Nelson Mandela’s memorial service is that of an angry patriarch embarrassed by the actions of errant adolescents. The other is that the archbishop was stepping into a void that used to be filled by the larger-than-life figure of Nelson Mandela. In the absence of the towering Madiba, and the presence of little mutinies that wouldn’t be doused by the drizzle, the diminutive clergyman showed that South Africans are not a rowdy bunch, misbehaving apropos of nothing.

“I want to show the world we can come out here and celebrate the life of an icon. You must show the world that we are disciplined. I want to hear a pin drop,” the Nobel Peace winning clergyman said to the remnants of the 70 000 people who had earlier reduced ANC deputy president Cyril Ramaphosa to threats, begging and pleading. When president Jacob Zuma stood up to address a rapidly emptying stadium the heckles broke out again: forcing the organisers to drown out the protest by music (a new definition of protest music?).

The day began very early for thousands of South Africans who arrived at Soccer City in the early hours of the morning. Despite a downpour considered a good omen in most African traditions in this case rain almost ruined the hero’s send-off. For most of the day the sun never showed its face, remaining hidden behind dark, menacing clouds that continued to sprinkle a soft, unrelenting rain. By the time foreign dignitaries started coming into the stadium after 11am, it looked like former president Nelson Mandela might not get the send-off he deserves.

Large swathes of orange seats remained empty; the rain wouldn’t let up; the triumvirate of steel stages didn’t show any life; not even the two screens mounted high up provided a respite. They were as inanimate as the still figure of Mandela who looked out unblinking at the masses who had come to honour him. Where were images of the famous Mandela jive? Why were we not shown videos of Mandela with the kids? Or Mandela walking out of prison, Winnie Mandela-Madikizela by his side, hand victoriously held aloft? Or Mandela with his comrades-the men and women- who have been by his side since he decided to struggle against the dehumanisation of his people? Is it possible that the unimaginative, unspectacular and unchoreographed organisation contributed to the lacklustre memorial service? Perhaps it was a confluence of a stodgy memorial presentation and the lingering discontent over the Nkandla splurge, the maligned e-tolls, the everyday exposes of corruption of inadequate governance and attention to poverty alleviation, education and health-care?

Starved of “entertainment”, cold and wet, the mourners’ (yes, that’s the word) mood was lifted when video images of former president Thabo Mbeki; Mandela’s widow Graca Machel; Zimbabwe president Robert Mugabe; United States president Barack Obama and his wife Michelle and other celebrities popped up on the giant screen. But when the images of Zuma were screened on the huge tablet, the temper of the masses below turned as dark as the skies above. “Boo! Boo! Boo! Boo!” the “Boo!” choir sang in a note that reached multiple, sustained crescendoes. The people who could have rescued Zuma never did. 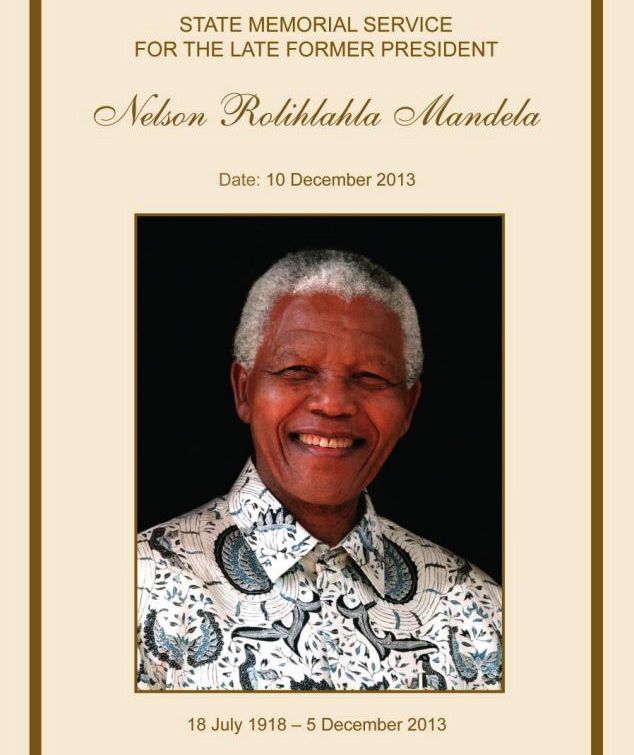 ANC elder and fellow Robben Islander Andrew Mlangeni delivered a mechanistic speech barely audible over the stadium’s mediocre public address system. He rendered the idea of Mandela we all know: the picture of the icon that the 24-hour news channels have been feeding us. Nothing personal, no anecdotes, just the metaphor of Mandela.

It was left to United Nations secretary general Ban ki Moon to prepare the crowd for Obama’s rousing speech later on. Well-versed to the play of symbol and metaphor in African cosmology, the secretary general invoked the rainbow and its parents- the rain and the sun. Moon said: “In nature, rainbow emerges from rain and the sun. It is that blending of grief and gratitude that I feel today. I hope you will be able to see the rainbow soon. Through the rain of sadness and the sun of celebration, a rainbow is [in] our hearts.” He then ended his speech by “lala noxolo”, a gesture which buoyed the spirits of the audience. Full speech here

Next up was Obama who, true to type, fired the masses with his oratory. “It is hard to eulogise any man – to capture in words not just the facts and the dates that make a life, but the essential truth of a person – their private joys and sorrows; the quiet moments and unique qualities that illuminate someone’s soul. How much harder to do so for a giant of history, who moved a nation toward justice, and in the process moved billions around the world.” Full speech here

As if told to go home, thousands streamed out after Obama’s speech. Was this meant to snub the president? Or that people enamoured of glitz had had their intake of Obama’s stardust? Or was the inclement weather playing a part in the departures? Those who remained had to endure barely audible translations of speeches spoken in Portuguese (by Brazilian president Dilma Rouseff) in Spanish by Raul Castro and other global leaders.

When eventually Zuma stepped onto the podium to deliver his speech, the caustic atmosphere had grown heavier with sulphur and other noxious gases that the president could barely breathe. So heavy was it that Zuma’s initial presence was met with universal pandemonium that had to be rescued by music. When he eventually delivered his speech it wasn’t anything to take too seriously. Or to tweet. It was a workaday speech more notable for Mandela’s biographical details than anything else. Couldn’t the president have told us the first time he met Madiba? Why didn’t he break into song and dance (something he is really good at) to pacify the throngs?

It was this abyss that Archbishop Tutu filled with a schoolmaster’s imagination and preacher’s charisma. “We promise God that we are going to follow the example of Nelson Mandela,” he declared. Will analysts look back at Madiba’s memorial service and mark it as the day, to borrow Yeats’ phrase, on which “all changed,” and Zuma lost control of the party?