As Nelson Mandela’s body lay in state in Pretoria, where an estimated 100 000 mourners went to pay tribute, hundreds of inner-city Johannesburg residents were brutally evicted with batons and riot shields by a private security company calling themselves the Black Bees. Ironically, the eviction took place directly across the road from the Drill Hall, the former British military base in which the early stages of the Treason Trial – which eventually led to Mandela’s imprisonment for 27 years – were conducted. The Black Bees were clad in black uniforms and red-and-yellow riot helmets. Carrying batons, they surrounded the building known as Diamond Exchange on the morning of Friday December 13. They appear to be a new competitor to the Red Ants, the infamous private security company usually tasked with carrying out inner-city evictions. The official name of the Bees is Oha Protection Services.

Residents of the Diamond Exchange building, including a number of children and disabled, were evicted on to the street. A small bank of mattresses formed in Twist Street surrounded by suitcases and household possessions, blocking the path to the informal taxi rank. Many of those evicted complained of losing possessions in the process, and numerous witnesses claimed the Black Bees sprayed residents with tear gas and beat some residents, leading to three people, including a blind man, being hospitalised. Oha Protection Services was not available for comment over the weekend.

The tenants of Diamond Exchange had lost a court case against the eviction on November 20 last year. At the hearing, the owner of the building was listed as Vosal Investments.  The company wanted to evict its residents for not paying rent. In the case, the residents had to defend themselves as they had lost their legal representation because of infighting over rental payments – some residents were prepared to pay rent, others weren’t. Nonetheless, the judgment given was based on possibly spurious legal grounds –  the judge cited health reasons and poor living conditions as the basis for eviction. The Constitutional Court ruled in 2007 – in a case commonly known as Olivia Road vs the City of Johannesburg – that eviction based on health grounds cannot be undertaken without alternate accommodation being provided. In December 2012, the Constitutional Court ruled in a landmark judgment (commonly known as Blue Moonlight vs the City of Johannesburg) that evictions that would lead to homelessness cannot be carried out, even if by a private owner, unless the city provides alternate accommodation. In addition, the Prevention of Illegal Evictions Act of 1998 states that in evictions, “special consideration should be given to the rights of the elderly, children, disabled persons and particularly households headed by women”.

In spite of constitutional protections, the difficulties of undertaking and sustaining legal processes for communities living in highly precarious conditions, with diverse populations, are often prohibitive. The leader of the building committee, Ethel Msonza, claims that the High Court order was never served on the building and distributed to its residents (a criteria for lawful eviction) and that there was no consultation from the city prior to the eviction regarding possible homelessness or vulnerable groups.

Many of those living in Diamond Exchange are from other African countries, yet constitutional protection against homelessness still applies to non-citizens. Josephine Ndlovu is a 62-year-old Zimbabwean woman looking after five children, and now she is living on the street. She had been living in the building since 1997 and works as a trader in the inner city. She has a trading permit. Last month she lost most of her income as a result of the City of Johannesburg’s Operation Clean Sweep, in which metropolitan police unlawfully evicted traders from the streets. The Constitutional Court ordered the City, on December 5, the day of Mandela’s death, to allow the traders to return to their trading spots.

A week later, Ndlovu found herself on the street again. She sat on a pile of mattresses surrounded by buckets and tea cups. “They took everything out. We lost lots of things. No blankets, no suitcase.”

Another Zimbabwean woman, Margaret, who wanted only her first name to be used, was begging at nearby traffic lights at the time of the eviction. When she returned to Diamond Exchange she found that she and those with whom she was living had lost many possessions: “We have lost speakers, buckets, the clothes of our children, pots, plates, cups…”

Late on Friday, skirmishes broke out between the Black Bees and residents. Residents allege that several people were hit with batons. On the Saturday after the eviction I met a blind man, Samuel*. He had a stitched and bandaged head. The bandage was soaked with blood. He and other witnesses allege that he was beaten by the Black Bees. He was taken to Hillbrow Hospital for treatment.

David Freeman also lived at Diamond Exchange. He is a student at the University of Johannesburg. He is a South African citizen and grew up in South Africa, though his family is Zimbabwean. He lives with his aunt and supports his family by working part-time in a fast food restaurant. He has a sponsor for his education, but his family cannot afford decent accommodation. David lost his possessions and savings in the eviction. He believes the eviction taking place in the week of Mandela’s memorials is not coincidental. “It feels like they’ve taken advantage of this. Now they’ve come to take our things.” He believes Mandela would not approve what happened.

As the memorials for Mandela continued nationwide, in inner-city Johannesburg the evictees gathered during the night in the confines of temporary walls made by mattresses. They stayed awake to protect their possessions from being stolen, and a group of women sang through the night to keep their spirits up. They sang tributes to Mandela: “Nelson Mandela, no one will be the same as you; no one will look like you.” The vigils kept by those on the streets provide a different view to those who attended Mandela’s official memorials. Theirs is a view of a South Africa in which eviction, homelessness and dispossession is still commonplace.

* Name has been changed to protect his identity 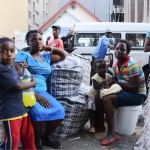 Margaret on the right, ““We have lost speakers, buckets, the clothes of our children, pots, plates, cups…” 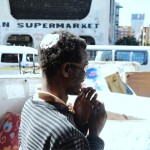 Samuel* alleges that he was beaten by the Black Bees. He was taken to Hillbrow Hospital for treatment 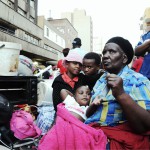 Josephine Ndlovu is a 62-year-old Zimbabwean woman looking after five children, and now she is living on the street.