CA David’s debut novel The Blacks of Cape Town follows Zara Black, a Cape Town-born historian, as she traces the history of her family from the first Black in the Mother City − her grandfather − down the bloodline to herself. We meet Zara in an apartment on Bloomfield Avenue, New Jersey. She’s longing for something, missing something on the other side of the Atlantic. She’s running from something, too; something that rings of betrayal, something burdened with regret, something like a curse, handed down like a blood stain from Black to Black, and black to black.

I start reading this book just as being a black in Cape Town has just come into sharp focus. Zara Black is trying to lose herself in a foreign place while attempting to find her family. An envelope, sealed with an official government stamp, questions her father’s “struggle credentials”, and she’s trying to reconcile what she knows of him with what has just come to light. Nelson Mandela has just died and the city is mourning him in its own strange way.

His face is burning in green on the side of the mountain he would stare at from Robben Island. We’re trying to reconcile the fighter, the activist, our flawed inheritance with this empty symbol of reconciliation we’re being told he is. It’s 2013, the centenary of the Native Land Act, and after months of searching, I can’t find anyone who’ll let me sign a lease agreement on this side of the mountain. I, too, am a black in Cape Town, and I know this stain, or something like it, the self-imposed exile of not being white in this place, the paranoia and regret. In the novel, Zara finds refuge somewhere else, but home keeps calling. It’s in a Coltrane song wafting through the window, in the envelope on the desk, and in the constant contact with her cousin back home. 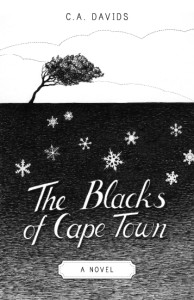 We learn early in the book Zara is writing a paper about Timbuktu Manuscripts. Mention of the manuscripts peppers the book like seasoning, adding context but very little else, acting like a cutesy, quirky best friend in a movie. The paper she is writing is a row of pillars that really doesn’t hold anything up, but it doesn’t entirely let it down either.

In the book, the surname Black is cursed, and perhaps the race is, too. Isaiah Black, the first Black in Cape Town, is also the first betrayer. He turns his back on his race and his black mother. His fair skin allows him to pass for a white man, a white man named Black who leaves a mining town in “the cusp of a pernicious madness” for a new name and a new life in the Cape. The betrayal, like the name, like the blackness, reappears in every generation. In interviews, Davids asserts that book, above being the story of a historian attempting to piece together the fragments of her family, is about race. In an interview with Percy Zvomuya in the Mail & Guardian, she says, “I was trying to speak about race because we haven’t spoken about it. [Perhaps] we are speaking about it [now] but we are not having a direct conversation.” But while attempting to speak directly about race, she also attempts to write a post-race novel.

The discussion about race is not as direct or as pointed as you might expect. When Isaiah becomes a non-black Black, the reader anticipates that this moniker will set the tone of the book, and not the betrayal itself. I’m not certain that this novel is about race, as much as it features it. Does it matter that her dad’s girlfriend was white? That his best friend was black? That both her father, and that girlfriend, ended marrying their “own kind”? Or perhaps the book treats race in the manner in which it appears in real life −. more often as subtle differences, coincidences and happenstance than blatant, explicit incidents.

What is captured amazingly in this brilliantly written debut novel is tension and longing. Davids describes this anxiety in an encounter on a train with stranger.

“As the woman unfurled a crumpled note, the American flag painted on nails that arched over the tips of her fingers, Zara had this question: what was the thing lodged between longing and loathing? That sensation she could feel pressing against her diaphragm that made her despise, even if just a little, all that she missed – her father, her country and even her beloved mother.”

The thing (perhaps the word here is tension) between longing and loathing is the thing that carries this fiction’s tale. It’s the strain drawn tight over oceans and generations, across love and literature. It’s a thing one can’t touch or point to. It’s the intangible truth of being a black in Cape Town.

Lindokuhle Nkosi, a writer from South Africa whose work textual work often merges with installation and performance. She has written for Mahala, Chimurenga, Africa Is A Country, City Press, Elephant Magazine, Red Bulletin, and Timeslive, and she has curated exhibitions and projects at galleries and in the public space. While floating across different genres – journalistic, reflective, experimental – her work is consistently insightful, rich in textures, and engaged with realities. Lindokuhle’s work as a writer, curator and project organizer is fervent in its radicalism, its honesty and willingness to engage her environment, and communities on the periphery. Beyond her writing, she has also engaged in interventions that explored the realm of performance employing a mixed media of texts, installations and conversations. View all posts by Lindokuhle Nkosi →