“I now pronounce myself deflowered,” declares Mokgeti, the chief protagonist in Untitled, Kgebetli Moele’s third novel. The novel opens as Mokgeti, abused and menaced, is trying to express how she feels by way of verse.

Moele’s debut novel, Room 207 (Kwela, 2005) was published to wide acclaim, winning the Herman Charles Bosman Prize for English Literature and the University of Johannesburg Debut Fiction Prize in 2007. He followed it with The Book of the Dead (Kwela, 2009), a story of a man living with HIV and whose high point is when the virus, in a moment of ventriloquism, assumes a voice and tells of its conquests. The Book of the Dead was awarded the K Sello Duiker Memorial Award in 2010.

Moele occupies the role of the tortured artist living on the margins. In a rare media interview, he said he “believes that he is a hardcore hustler but his close associates think that he is just a hobo with a manuscript”. Whereas most South African writers post 1994 are fascinated with crime fiction or the country’s political past, angsts and horrors, Moele’s oeuvre is about everyday people’s struggles: their hopes and despair, their poverty and the way they are ravaged by HIV/Aids.

As if Moele is in conversation with theologian Dietrich Bonhoeffer, who once said, “The test of the morality of a society is what it does for its children,” Untitled tackles the issue of teachers preying on young girls like Mokgeti. They know that they are beyond reproach and that, if the affair comes to light, the community will gang up against the victims.

Take, for instance, the story of Little Bonolo, who is raped by a teacher. Instead of outrage against the abusive educator, “the community said that ‘she wanted it’, but how can an 11-year-old girl want to be raped?” Little Bonolo’s tearful tale of rape and the way the bureaucracy – be it the police or the education authorities – is a familiar narrative in the country.

Long after you’ve turned the last page, the book haunts you. The episode foregrounds the question: why is the ghetto the only place where these dark and vicious deeds appear not as aberrations or deviations from the norm? 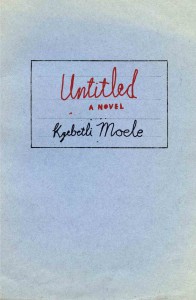 Ukuthwala, the practice of abducting young girls and forcing them into marriage, is a controversial aspect of our national discourse. Moele writes of an even more barbaric practice where rape victims are forced into marrying their abusers as a way of shrouding the disgrace. “Seeing that our son, my son, has disgraced your daughter, we would ask very shamefully to take your daughter in marriage so that the same shame that was cast upon your family is our shame too,” says Thapelo’s father. We are in the middle of an undeclared war on women and children, oblivious to their suffering.

Though Mokgeti pronounces herself deflowered, in no way does she consider herself devalued; she still harbours a dream of one day going to study actuarial science at Oxford University.

Untitled lacks the poised prose of The Book of the Dead; the structure of the narrative is linear, never moving back and forth, which lends it a feeling of extreme stagnancy in many parts. The book also has writing flaws that should have been addressed by an editor. The gossip and quarrels between Mokgeti and her friends make the book feels like you’re reading a teenager’s secret diary. I felt the urge to yell: “Enough already!”

But what redeems it is the tender and deep way it looks at the issue of sexual violence; it challenges the reader to think of the thousands of victims who are subjected to sexual violence daily – those whose stories receive no media coverage or violent outburst from their communities. Much of the book’s appeal derives from Moele’s ability to turn a simple plot into an intricate one.