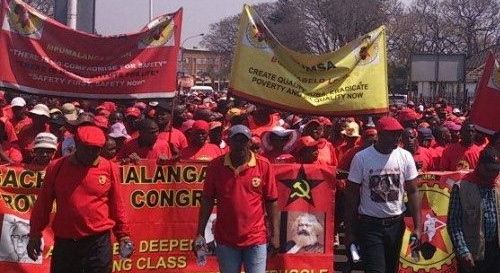 In January 1973, dockworkers in Durban embarked on a wave of wildcat strikes against low wages. In total, some 61 000 workers took part.

What became known as the “Durban Moment” not only broke the industrial relations framework that had been established after black trade unions had been smashed by the apartheid state in the 50s and 60s, but also led to the rebirth of the black trade union movement, which saw the establishment of the Congress of South African Trade Unions (Cosatu) in 1985.

A similar moment took place on August 17 2012, the day after 34 workers were shot and killed at Marikana in the North West. Workers, rather than ending the strike after the massacre, continued their attempt to secure a new wage of R12 500. They were soon joined by tens of thousands other workers from across the platinum belt. The strike lasted another 90 days. Cosatu’s biggest affiliate at the time, the Nation Union of Mineworkers (NUM), leaked tens of thousands of members as it failed to support workers’ demands. In many cases, it sided with management against striking workers.

This led to a third moment, which took place between December 17 and 20 2013, as Cosatu’s largest affiliate – and the largest union in African history – the National Union of Metalworkers of South Africa (Numsa), held a special national congress to decide on the future of its relationship with the trade union federation and its alliance partners, the African National Congress (ANC) and South African Communist Party (SACP). At the end of the congress, Numsa decided it would formally break away from the tripartite alliance after being in it for more than 20 years. It set its sights on expanding its scope to other sectors, including the mining industry, and declared open war against the faction led by Cosatu president Sdumo Dlamini, which is dominating the union’s leadership. Most significantly, it began the process of building a left political alternative to the tripartite alliance.

The key moment of the Numsa congress didn’t take place in some back room meeting of its elite or in the commissions that debated and decided on Numsa’s resolutions; it took place on the first night of the conference when Rehad Desai’s documentary on Marikana, Miners Shot Down, was screened to more than 1 000 delegates, guests and journalists. The proceedings of the next day began when delegates marched into the venue clutching R100 rand notes singing, “Who killed Mambush at Marikana? Zuma must resign. Phiyega must resign. Ramaphosa must resign”.

At that moment, it became apparent that Numsa, would break with the alliance and this would initiate what a delegate described as “the post-Mandela period” in South African political history. In the words of its new president, Andrew Chirwa, “The state of the working class is in shambles. The working class is leaderless.” Perhaps stepping into that void, Numsa gave R350 000 it had raised to some of the Marikana worker-leaders and their family members. A worker-leader wearing an Association of Mineworkers and Construction Union (Amcu) T-shirt began singing to a Numsa delegation that had been told repeatedly by Cosatu’s leadership that Amcu is a homicidal vigilante union intent on undermining the unity of the working class for the benefit of its bosses. Later that evening, a Limpopo delegate said, “We can’t vote for an ANC that kills workers with taxpayers’ money”. He added: “This is the worst thing the ANC has done since 1994 … It wouldn’t have happened under Mandela.”

Why is Numsa splitting from the tripartite alliance? These reasons are pretty straightforward: Despite numerous attempts, Cosatu has been unable to influence the policy direction of the ANC since 1994 and has consistently moved in a neoliberal direction, first through the adoption of the Growth, Employment and Redistribution programme (Gear) in 1996 and now more recently with the adoption of the National Development Plan (NDP). As Numsa general secretary Irvin Jim admitted at the congress, “the strategy of swelling the ranks of the SACP and ANC has failed”. The ANC remains, as its leaders like to point, out a “multi-class formation”, but the unions and left-leaning sections of the alliance are becoming increasingly politically marginal and the SACP has transformed into a reactionary clique that uses Stalinist jargon to defend the president at all costs. Or, as Jim put it: “We want a vanguard party, not Blade’s fish and chips,” in reference to SACP secretary-general Blade Nzimande’s single-minded determination to liquidate whatever the SACP once stood for into unconditional defense of President Jacob Zuma.

The last attempt to force the ANC left was at Polokwane, in which the alliance’s left made a Faustian pact with Zuma, his shady backers and various disparates to come into power and break with “the ’96 class project” and remove its representative in chief, former president Thabo Mbeki. But this, ultimately, would prove fatal for the left. Their mistake was twofold: Firstly, in thinking that they could call the shots and control Zuma, and secondly in individualising the political struggle within the alliance through the figure of Mbeki. The supposed leftward turn of the ANC after Polokwane never came, and the much-vaunted “Lula moment” proved to be phantasmagoric. The working class has been rewarded for bringing Zuma to power with e-tolls, the youth wage subsidy, the NDP and, of course, Marikana.

The Numsa congress saw a break not only with the figure of Zuma, but the idea of the ANC as a vehicle for pursuing the interests of the working class. The SACP was the object of so much scorn that the possibility of winning it back wasn’t even considered. This signifies a change in political consciousness. Whereas before the ANC could never be wrong, merely the people in charge of it, Numsa argued that the ANC viewed workers as voting fodder that could be ignored between elections. As the final declaration put it: “There is no chance of winning back the alliance to what it was originally formed for, which was to drive a revolutionary programme for fundamental transformation of the country.” And with these words, Numsa broke with the ANC. “Numsa as an organisation will neither endorse nor support the ANC or any other political party in 2014.”

Following this, it declared: “Numsa calls on Cosatu to break from the alliance. The time for looking for an alternative has arrived.” Numsa sees part of its mission to attempt to fulfill that leadership vacuum both in terms of the “leaderless” working class and in terms of the left in South Africa more broadly. It seeks this in the face of the disintegration of the alliance’s left, the continued irrelevance of much of the molecular independent left and the collapse of social movements in the past five years or so.

The media expected Numsa to announce it would form a mass workers party with immediate effect to compete in the 2014 elections or announce its merger with the Economic Freedom Fighters (EFF) or something along those lines. But the trade union chose to pursue a strategy of building a united front with left-leaning elements of civil society, other unions and community organisations before it moves towards the stage of building a party. There have been suggestions that Numsa and the EFF are natural allies, but both Numsa membership and leadership were highly critical of the EFF during the conference. It was asserted that the EFF was anti-capitalist rather than being socialist, meaning that it was not committed to workers’ control as a principle of economic transformation. Furthermore, Numsa regards EFF leaders as undemocratic and is highly suspicious of Malema and his cohorts’ previous history “as capitalists”. All of this is clearly outlined in the report given at the congress by Jim.

What type of party Numsa would evolve into is still very much an open-ended question. It could be a broad mass workers party or it could be another vanguard party. But, like the “Durban Moment” in 1973, this Numsa moment marks a new direction in the trajectory of the workers movement in South Africa.

Benjamin Fogel is a PHD candidate in Latin American History at New York University and he is the former managing editor of Amandla magazine and is part of the Africa is a Country editorial collective . He seems to fill his spare time with Cam'ron, Manchester United and Fredric Jameson. He also really hates libertarians, really really hates them. View all posts by Benjamin Fogel →