Pete Seeger, who died this week at the age of 94, was a decent, faithful human being. A left-wing activist and American folk-protest-singer who irresistably melded political consciousness to song-crafting. He lived life without the egoism of rock music, but rather, with the empathy of activism. His work was fundamental to the Civil Rights and Anti-War movements in the United States, as much as it was to the evolution of a form that that now echoes through artists like Bruce Springsteen and Ryan Adams.

He was never dogmatic and acknowledged his mistake in blindspotting Stalinism, but remained a Communist until his death. Seeger was an Internationalist, a humanist and a hero of The Con. The Struggle was evident in his work and his being. The childlike joy he demonstrated when the US finally voted in a black president was etched on his face during the performance of This Land is Our Land with Springsteen at the inauguration of US president Barack Obama in 2009. In 2011, during the Occupy Movement’s moment of hopeful egalitarianism The Con was honoured to witness Seeger leading a group of activists in a rendition of We Shall Overcome – the old Civil Rights Anthem – he seemed wise with age, yet vital with youthful hope.

Human beings like Pete Seeger do not die. Because of their music, politics, actions and words, they remain inside us – ours, is the struggle to locate them so that we continue the Struggle.

Bruce Springsteen who is currently touring South Africa, after having released his new album High Hopes on January 14, played the spiritual We Shall Overcome at one of his concerts in Cape Town. Seeger’s version of the well-known spiritual is still considered to be the anthem of the Civil Rights Movement. “I lost a great friend, a real hero last night,” he said onstage. Springsteen recorded an album of Seeger’s music, the critically lauded We Shall Overcome: The Seeger Sessions. It was released in 2006 and saw Springsteen repurposing those protest songs for a new time.  See the performance of O Mary Don’t You Weep below. Springsteen also performed at Seeger’s 90th-birthday concert.

In a statement published in the Washington Post Springsteen said,

“We deeply mourn the passing of Pete Seeger. We believe that nobody is truly gone until all those who are touched or influenced by that person are gone from the Earth…So Pete will live on in the hearts and minds of so many for years to come. His vision of peace and justice and equality for all will live on and continue to influence. His music has been used all over the world for social justice. From the Civil Rights movement to the anti-war movements Pete and his songs have been there on the front lines. Like a ripple that keeps going out from a pond Pete’s music will keep going out all over the world spreading the message of non-violence and peace and justice and equality for all. Wherever people are fighting to be free or fighting for equality Pete’s songs and Pete’s vision will be there with them.”

Former Rage Against The Machine guitarist Tom Morello, who is touring with Springsteen and the E Street Band in South Africa, shared some thoughts on Seeger with Rolling Stone magazine.

“Pete Seeger was 94 years old and lived a remarkable life. There’s a temptation to go, “Do not weep for Pete Seeger.” But I did weep for him, because we could use 94 more years of a guy like that. Pete was a friendly acquaintance of mine. I had the opportunity to duet with him on his last record on a song called A More Perfect Union. Being able to stand on stage with him at the Newport Folk Festival singing We Shall Overcome and This Land is Your Land are moments now that I will treasure forever. He sort of became this kindly grandfather figure of Sixties feel-good nonviolence in popular culture, but Pete Seeger was a threat. He always declared himself a communist with a lower-case “c.” He was this sort of gentle grandfather with a backbone of steel who was going to put a chokehold on the powers that be until they relented. That guy was no joke. He was a hardcore badass when he stood up to House Un-American Activities Committee, saying, “How dare you question my Americanism because I play music for people whose politics are different than yours?” Yet he played lovely, gentle songs at countless pre-schools for toddlers. He was a unique, spectacular combination of things I doubt we’ll ever see again.”

Morello recounted for Rolling Stone how during a rendition of We Are Alive in Cape Town, Springsteen substituted New England railroad workers with the victims of the Sharpeville Massacre in 1960 and the miners that were killed at Marikana in 2012.

“Whether it’s Pete Seeger standing in from HUAC committee in 1960 or a Bruce Springsteen song in 2014, its important to keep the pressure on. It encouraged me to re-double my efforts in that regard. I think that there are artists of different genres whose calling is to use their art to hope to affect and better the human condition – whether it’s System of a Down, or Rage Against the Machine, or Public Enemy, or the Clash, Bruce Springsteen, or Pete Seeger. It’s a group that I’m proud to be counted among.”

Morello’s final thought, “The bad news is that Pete Seeger’s dead. The good news is that there’s going to be one spectacular hootenanny going on in heaven when Guthrie and Lead Belly reunite with their bro Pete Seeger.” 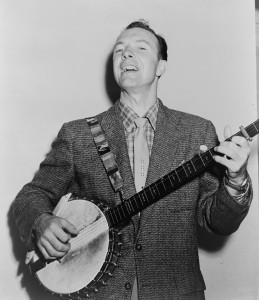 “Once called ‘America’s tuning fork’, Pete Seeger believed deeply in the power of song,” said Obama. “But more importantly, he believed in the power of community.” “To stand up for what’s right, speak out against what’s wrong, and move this country closer to the America he knew we could be. Over the years, Pete used his voice — and his hammer — to strike blows for worker’s rights and civil rights; world peace and environmental conservation. And he always invited us to sing along. For reminding us where we come from and showing us where we need to go, we will always be grateful to Pete Seeger. Michelle and I send our thoughts and prayer to Pete’s family and all those who loved him.”

Former American President Bill Clinton tweeted: “Pete Seeger’s great heart was matched only by his commitment to social justice. My thoughts and prayers are with his family and friends”.

Main Photo: Pete Seeger in concert in 1986 by Josef Schwarz