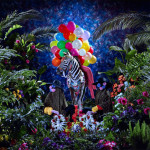 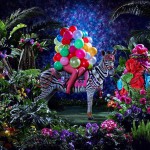 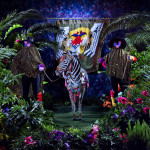 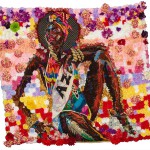 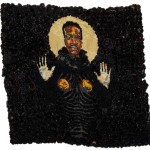 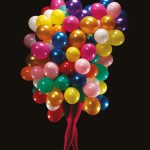 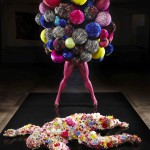 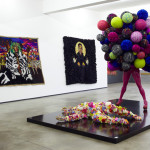 The Future White Woman of Azania Saga is Athi-Patra Ruga’s solo show at Cape Town’s Whatiftheworld Gallery. The exhibition is largely composed of tapestry work, new media, photographs and installations-cum-sculptures. Ruga leaves no space unoccupied and no colour unexplored, yet his offering is not an empty spectacle of garish objects. The show touches on trending issues in the current sociopolitical situation, such as the centenary of the Native Land Act of 1913, the emergence of Pan-Africanist polemic of the Economic Freedom Fighters (EFF), and the passing of our most beloved son of soil, Nelson Mandela.

But you wouldn’t get this sense if you relied only on the press release. The artist is “…turning his attention to an idea intimately linked to the apartheid era’s fiction of Azania…” it reads. “It is a myth that perhaps seems almost less attainable now than when the Pan-Africanist Congress (PAC) appropriated the name in 1965 as the signifier of an ideal future South Africa.” The conflation of the historicity and mythology of African struggles dramatises the thriving ignorance about the continent and its history. It’s a reproduction of an undying colonial pedagogy and its determinate refusals of engage Africa’s existentiality and presence. But is this what the artist and the exhibition are about?

Let’s begin with the word “Azania”. Its etymological roots are mainly to be found in the Persian or Arabic word ‘zanj,’ which literally translates as ‘black’. Just as “black”  on the other side of the  Atlantic Ocean is loaded with the negative, the true holds on the East. More specifically, it is linked to the first black African slave rebellions of 869 – 883 AD, piecemeal insurrections that eventually resulted in the defeat of  Arab enslavers and a take over  of the caliphate.

It’s all good to imagine a gaudy and flowery future, as imagined in the dream of a free Azania. But every future, as we all know, is shaped by the lingering blotch of its nocturnal past. Ruga’s show had me pondering the nightmare of history from which we haven’t yet woken. But it doesn’t end there. I found myself thinking of beauty, the aesthetic and the historical meaning of colour. It’s uncommon in current artistic practice to have these questions stitched together in one show.

In The Future White Women of Azania Saga, the central character after whom the show is named is littered throughout Ruga’s recent work. She is a non-person with a colourful exteriority: her entire upper body right up to her head is covered in balloons of garish colours. Below that, we see toned limbs covered in bright red stockings. This is not just an embodiment of colour, but a veritable explosion of it. Even though each colour has its own individuality, its beauty comes alive when it synchronises with others. She is universality; a Miss Universe, if you like.

The show is an attempt, among other things, to think of colour and its relationship with the human body, a minefield when viewed through the race-conscious lens of South Africa. We can no longer refute that the emergence of the modern world depended on its proclivity to pigmentocracy. The skin is simply a biological accident that assumed political importance and then became used as ideological marker of belonging and difference. There is a play on the correlation between the contingency of bodily differences and other exteriorities of self-definition.

Ruga’s body of work subtly alludes to questions of race, sexuality and gender, all tied to uncanny sartorial appearances. It’s a contestation for the construction of being between and through exteriorities. This is greatly alluded to in his montage, The Knight of Long Knives, a title alluding to questions of history, race and violence. The piece points us to many possibilities. Is the unknown titular Future White Woman the lady of the knight, or perhaps his usurper, who enters, like Jesus entered Jerusalem, the Edenic paradise riding a zebra? Is Ruga’s Future White Woman the new master cosmetically domesticating the ‘dying’ racist zebra while embodying and bearing the torch of multiplicity?

Today we’re cajoled by optical and dissuasive powers of colour in abundance – what I could call an ideology of colour. One can only imagine the resounding laughter of town planners after 1994 when they built colourful matchbox houses for the poor. The assumption is that the multiplicity of colour will compensate for the ugly architecture. Much of this discourse is rampant and uncritically received in neoliberal South Africa. In his colourful reproduction of what alludes to a cartographic layout of a section of the east of Southern Africa, in The Lands of Azania, Ruga dramatises, in a caricatural manner, the depressing reality of African states, as “lands suggestive of sin, decadence and current politics”. One cannot avoid seeing the dramatic duplication of the world’s general perspective of Africa as a ‘heart of darkness’. This Africa is pretty much the invention of the European imagination in that it has to be disciplined and civilized. It is an idea that refuses to critically assess the unabated corrosive and exploitative intrusions of external forces to own African lands and souls.

Such representations run in tandem with Ruga’s pornographication of black females, as we see in pieces like Uzuko and The Lord Is on the Hoof. Or what smacks of a primodialism, in his Invention…Presentation…Induction. Such images are disturbingly placed side by side with the ubiquitous Future White Woman, the single thriving and colourful but selfless and anonymous white woman. One cannot help but suspect that such gross representation is prepared as a sensational feast for the world, what artist and intellectual Olu Oguibe might call “doing it for the mungo”.

The Future White Woman in Azania Saga is a story of heroic achievement on many levels. Ruga’s attention to detail is refreshing and commendable. But, conceptually, Ruga seems to be tiptoeing precariously on the precipice – he flirts with the crumbled but happy-clappy post-1994 mumbo jumbo. The penetrating warmth of his colours and his intricate dexterity and labour does not succeed in obscuring the dissuasive and half-baked assumptions that inform his creative imagination.