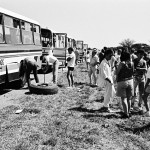 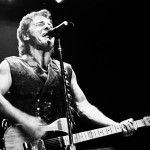 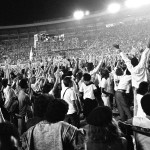 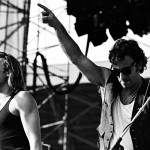 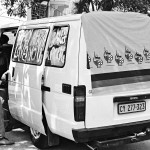 All Photos by Rafs Mayet

It’s October 1988 and Bruce Springsteen and Youssou N’Dour are part of a stellar line-up playing at Amnesty International’s Human Rights Now! concert in Harare. After several attempts, I finally get a restricted passport (which is only valid for certain southern African countries). A seat on a bus organised by the Wits University SRC and press accreditation through Afrapix were much easier to sort out.

When the big day arrives, the buses aren’t at Wits. Departure is delayed for a day and when we finally hit the road, things are pretty uneventful – for all of an hour or so. Near Pretoria it becomes obvious that the teenagers from Lenasia near the front are deep in party mode, still drinking from the night before. Every bus in the convoy has an SRC representative on board to ensure order and ours is a young lady who’s a bit schoolmarmish. She’s sitting with her boyfriend two seats in front of us and tries to control the drunken teenagers. They tell her where to get off. The bus driver stops the bus and threatens the group but gets short shrift. After more ructions Miss SRC’s boyfriend decides he’s had enough and marches to confront the noisemakers: He punches a kid in the back of the head and fractures bones in his hand. He yells out in pain. The bus driver goes in search of a doctor in the next town. In the meantime we’ve been made it clear to Miss SRC that missing the press conference that afternoon because of the delay would be a problem.

Then the inevitable happens: the bus gets a puncture. More delays, more misery, but we soldier on. After the repairs we’re entertained by a dude from Amsterdam who’d recently attended Nelson Mandela’s honorary 70th birthday concert at Wembley Stadium. There is a humorous blow-by-blow account of the concert, followed by war stories of amnesiac fame regaled by a faded rock starlet who at some stage had been part of an all-girl group with a few hits. Things become a lot quieter after that – especially after the noisy teenagers all passed out.

Near the border, Miss SRC announces that we must throw out our weapons and drugs before we hit Beitbridge. Her request is greeted by loud guffaws and subsequently ignored by everyone. At 5pm we arrive at the border, at the back of a line of vehicles several kilometres long. It feels like most of South Africa wants to get to Harare. Braais and picnic tables are set out, keeping pace with the slow trawl towards authority. Libby, Claire and I walk down the line, absorbing the festive atmosphere and meeting activists from different parts of the country. I see Rose and Tsie open a car boot full of goodies that the political exiles in Zimbabwe have requested: mainly digital watches, tennis balls and toilet paper. Intriguingly, there is a big vacuum cleaner on top of the pile. It’s part of someone’s lobola payment! Further along, we come across a Kombi with CE plates. We get talking to the driver, a cat from East London, and explain we’re media folks who are going to miss out big time if we’re not in Harare early enough to start working. He offers the mattress at the back. We accept. We clear the border post at 11pm and arrive in Harare at 6am the following morning.

A short taxi trip to a Harare suburb later, we meet our host, Derek M, who’s just leaving for work and promises to meet us at the stadium when he’s done. Accommodation costs however much booze we were allowed across the border and Derek M, aka Matty, says both he and his wine rack, newly laden and heaving with plonk and spirits, are both very happy for our rental payments. After organising temporary press permits at a government agency, Libby and I head to a city-centre hotel to catch a lift to the concert. It’s hotter than a township necklace in Harare and I find Jingles, a friend from Fordsburg, standing in the hotel pool with the water up to his neck. I know he can’t swim, so I ask him what’s cutting. He says he’s been in Harare for three days already and can’t stand the heat. Jingles has spent most of his time standing in the pool, drinking beer. It shows: he has a personal waiter replenishing each drained libation. I tell him I think the water’s changing colour, becoming yellower. He tells me to piss off and that we’ll meet at the gig.

We motor out to the Harare’s National Sports Stadium and it’s not long before we’re in an even slower queue than the one at Beitbridge. Steve HB makes like a Jozi taxi driver, gets on to the wrong side of the road and passes most of the traffic until he has to finally give way to oncoming cars. We get to the media briefing area and deal with a huge, unhelpful Mexican-American media liaison type. Eventually Joe Alfers, the pint-sized AFP photographer, threatens him with an African-style smackdown. After the briefing, we head into the belly of the stadium and bump into our host, Matty, and his girlfriend, Claire. Matty doesn’t recognise any of us. Claire tells us not to worry – he’s been chewing on dope cookies and she’s concerned that he may not even see the concert at all.

At around 4pm all the artists emerge on to the stage, cranking out a version of the old Peter Tosh classic Get Up, Stand Up. Then the concert starts in earnest. First up is Comrade Chinx and his band Ilanga. Next was the great “Tuku”, Oliver Mtukudzi, who floors the crowd. He’s recorded more than 60 albums over his career and yet, at the time, in apartheid South Africa with all its restrictions, we knew nothing about him. Youssou N’Dour followed and leaves us gobsmacked with his ability to sing in his normal range but suddenly climb an octave or two, pitching perfectly and cleanly, accompanied by a tight group of accomplished musicians. All this amazing music makes me realise how we’ve been denied by a government that blocks most attempts by cultural and musical activists from our own continent to come to South Africa. We know so little about our neighbours’ cultures and lifestyles. Tracy Chapman is next, and the stadium breaks out into Talking about a Revolution and other hits from her debut album, Tracy Chapman.

And then it’s the turn of “The Boss” – not the Bureau of State Security but the man whom so many had travelled so far to see. He doesn’t disappoint. Backed by the E Street Band, he plays songs from Born in the USA, including my favourite, I’m on Fire. He also speaks about conscription, which many in the crowd can relate to as fellow South African, David Bruce, was recently convicted for refusing to do the state’s dirty work with the South African National Defence Force. Then Springsteen gives a short spot to his saxophonist, Clarence Clemmons, who responds with a display of some dirty Texas twisting tenor sax.

Last up is Sting, who includes the poignant They Dance Alone, a tribute to Chilean women who, to mourn their husbands who disappeared during the reign of the dictator Augusto Pinochet, dance the cueca (the national dance of Chile) and place photographs of their lost loved ones in squares around the country. I spend most of Sting’s set with fellow South Africans still in exile: Stelios C, Julie F and Aunty Phyllis Naidoo, among others. There is too much to absorb on my first trip outside my country and I’m exhausted by the long trip, so I’ve given up on my cameras.

The next morning, wandering around town, we meet several South Africans proudly wearing ANC colours. They direct us to a left-leaning bookshop on Fife Street called Grassroots, run by Pat and Paul Brickhill, family of the late grand dame of SA theatre, Joan Brickhill. The shop is a small version of lefty heaven, packed with people overdosing on banned books, magazines and music, as well as badges, cassettes, key rings, banners, posters, wraps, clothing and all kinds of things that were taboo back home. I wonder how people are going to get all this stuff across the border, and my question is answered when I visit Aunty Phyllis’s place later in the week to see most of the shopping piled high in her already crowded home. She had been left with the task of smuggling them back!

And that’s the last (and first) time I saw Bruce “Stringbean”, as some called him then. I hear he’s around these parts for a few shows but he ain’t coming to Durban, so I may just have to make another trek north to get my musical fix.

Rafs Mayet is a documentary photographer from Durban, South Africa. View all posts by Rafs Mayet →