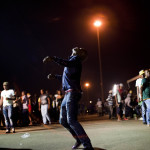 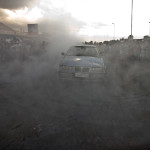 DONUTS : 11/2009 A BMW spins at a popular intersection in Vosloorus and quickly gathers a crowd from the sound of screeching tyres and a ravving engine. This form of show-off is illegal on public roads. Sotho Section, Vosloorus. 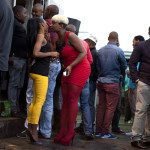 RED DRESS : 09/2012 A lady displays her fashion sense in the form of an extreme hairstyle and dress sense. Many of these partygoers dress to the nines and make a bold statement. Hurricanes, Katlehong. 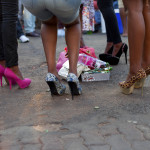 STILETTOS : 02/2013 A group of ladies identify a spot to lay their alcohol and stand. They surround their goods and enjoy the music. Hurricanes, Kathlehong. 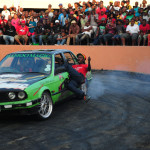 STUNTMAN : 04/2013 A BMW spins at a popular spot that is regulated, this time with a passenger that showcases stunts while the car is spinning. Bahama, Kwa-Thema. 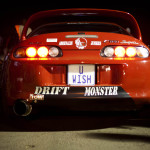 U WISH : 02/2013 A popular way of showing off is customizing your vehicles plates, as well as “pimping your ride”. Hurricanes, Katlehong.

All Photos by Muntu Vilakazi

In 2008, while working on a story about a music movement rooted in his neighbourhood, I needed some photographs from Muntu Vilakazi. After a bit of manoeuvring he obliged and copied about 20 images on to a disc. The pictures were of a monthly boho chill session called Evolokxion. It was run by a loose team of his homeboys from the East Rand township of Vosloorus, where he lived growing up.

Muntu’s role, as far as I could tell, was chiefly that of photographer, although, I’m told, that’s not quite where his involvement ended. A community aesthetic permeated through the proceedings and his images, filled with dreadlocked and Afroed hipsters (sometimes carrying babies wrapped tight in wax-print fabrics) captured the vibe with willful romanticism.

Looking at those images now, with their wide-open spaces, uninterrupted good vibes and Muntu’s unusual framing style, one can see that they were also an act of obfuscation.

Because there were sometimes children hanging around, Muntu seemed to have made the conscious decision to not shoot the drinking and the smoking that went on. But maybe that’s because he knew that the images in the disc he gave me were bound for newspaper publication. So like any good ambassador, he took it upon himself to portray his community, his friends and their guests in the most flattering light.

With his latest collection, on show at Goethe on Main from February 6 until March 16, Muntu turns his gaze outwards, focusing on the communities of Kathlehong and KwaThema in addition to Vosloorus. In a sense, he moves from insider to voyeur.

The blurb to the exhibition, found on the Goethe-Institut’s website, proclaims the work to be a story looking at the rise of the black middle class, taking in its “extravagance” and “ideas of progress against a society that sees them as exorbitantly wasteful”. Even though it’s carefully worded, the blurb appears to be a hasty attempt to frame the debate in neat aspirational tropes. The ‘new members’, even in their old / own neighbourhoods, are to be hawkishly watched for any signs of uppityness. But even though the photographs are not without their polemic undertones, it is situational context rather than Muntu’s need to lampoon that coheres the collection.

The photographs (shot between 2009 and 2013) are all taken in places of entertainment, with the bulk of them depicting Hurricane’s, a regular Kathlehong street party named after its founder. The rules of engagement here, as far as the purchasing of liquor goes, are rather abnormal. “There’s some weird socialistic thing happening there,” explains an antsy, chain-smoking Muntu at the gallery, about a week before his opening. “You can go there with your own cooler box, but you can also buy your booze there.”

In this section of photographs, booze is everywhere. One picture shows a close-up of a table laden with boxes and bottles, with one box identifying its contents as Johnny Walker Double Black. (Muntu asks me if I’ve ever heard of Double Black. I tell him I haven’t.) A profile shot of the ventricose torso of a man holding a burning cigar as dark as his fingers is backgrounded by an out-of-focus array of glasses and a bottle of Tanqueray. Not far from it is another photograph titled Yellow Bone. A group of men with only their upper bodies visible form a wall around a light-skinned black woman. A man in a dark suit stands proprietorially perpendicular to her, clutching a cider, his eyes averting the camera.

Muntu’s titling of the works helps us see them from his vantage point. Earlier in the series there’s a photograph of a chubby woman standing between the bulky rear wheels of racing bikes. Only the back end of the woman is visible, legs draped in leggings. The working title of the photograph is Big Wheels. “I think the feminists are gonna complain over my calling the picture Big Wheels,” quips Muntu.

As one studies the images, particularly the ones taken at Hurricane’s, one is struck by a particular thought: Surely this can’t be the modest face of “extravagance” and “exorbitant wastefulness”, especially given the number of Hunter’s Dry and Heineken bottles one can spot around the place. If these are Muntu’s own words, surely he knows better and, if not, why he would allow somebody to impose their views about black social mobility on his work. Drinking Hunter’s Dry − or Double Black, for that matter − in a converted township street hardly amounts to extravagance. It’s all relative to one’s pocket. Townships, after all, are not homogenous zones of black poverty.

But, then again, I’ve never been to Hurricane’s. “The cheapest whiskey I’ve seen in Hurricane’s over the years is J&B,” he says. “If you went there now, because it’s still early in the month, you’re going to find 15-year-old or 18-year-old Glenfiddich.” To be fair, though, Muntu’s aiming for the grey area.  “Look at ‘Pakistan’,” he says, his alternative title to a picture he has named Red Dress. He draws my attention to the image of a woman in a tight red dress leaning forward to kiss a friend. “I don’t know her bank balance, her financial status. By taking a photo of her, I have no interest in that. It’s just a place where people gather. Whether when you go home you’re going to sleep in the kitchen, no one cares.”

While the question of how blacks should or shouldn’t spend their newfound and/or hard-earned money is interesting only as a study in paternalism, it is the artist’s own portrayal of the upwardly bound that yields much more interesting conundrums. In a cluster of images closer to the entrance of the gallery, two suave-looking dudes seated at an outdoor table appear to heckle or be heckled by an elderly woman, her face blotched from years of bleaching. In another one, a hand pours whiskey into the flight path of a bike’s exhaust fumes, sending the spraying liquid (possibly) into the direction of the staring audience.

Then there are the BMWs – vintage, box-shaped 325is models refurbished to look brand new; well-worn classic shapes draped in racing colours, careening across makeshift tracks with staff-riding stuntmen; there are battle-weary “dolphins [E36’s]” doing figure eights on tight streets engulfed in plumes of tyre smoke and exhaust fumes. “In the East Rand, just like in Soweto, spinning [“drifting”] is still around but it had died down,” Muntu says.

Pointing to a picture taken in KwaThema, he says, “In Voslo, you can hardly come across a scene like this.” It’s the photo of the neon green BMW, stuntman hanging onto its door. The track is possibly in a residential area because Muntu says: “Someone realised there’s money to be made. People love the culture, and it’s a closed space. So someone thought, ‘Hey, I’ve got a BMW, how do we make money?”

Interestingly, Muntu says drifting’s comeback is largely helmed by working youths nostalgically mimicking the gangster aesthetic they grew up witnessing.
While most of the selection represents young adults enjoying routine recreational activities, a pair of photographs towards the tail end of the exhibition catches me off guard.
There is one of a dancing man taken at Hurricane’s, titled Bula Sekele. The man is captured in the evening, under the golden glow of streetlights, enjoying a lone transcendental, or perhaps drunken, moment.

The spherical glow of the lights seem to accentuate his metaphorical distance from the crowd, speaking to both the religious fervor with which house music is consumed in this country as well as how it is often accompanied by worldly manifestations of excess. Perhaps this is Muntu’s central critique, but my eye is also drawn to the audience − acutely aware, not so much of the man being photographed, but more of the process of compressing a moment for the multivalent assumptions of posterity.

The other photograph is of a group of children staring at something from behind a mesh wire fence in the soft afternoon light. The kids wear all manner of expressions, but all seem to be embedding the images they are witnessing in their minds. Although in the same residential precinct, they seem miles apart from the children in Muntu’s photographs from some years ago, enjoying the Blk Jks side by side with their “parents”. I wonder out aloud about how Muntu has chosen to frame these children, from the outside looking in. “The parents of these kids, the same ones who expose them to this lifestyle, have a lot of work to do,” he says. “We all want the good things in life … There’s a guy who’s going to get a job to get his gusheshe [325is], but there’s one who is going to want it now. He’s gonna hit Grade 10 and be like, ‘You know what? I’m wasting my time here.’”

The Politics of Bling: An East Rand Culture Quest opens at Goethe on Main (245 Main Street, Johannesburg) on February 6 and runs until March 16