South African satire merchants Laugh it Off, can go fuck themselves.

Three days ago, the art and culture website Mahala published an open letter from Laugh It Off directed at clothing company Jay Jays. Jay Jays was accused of having copied one of Laugh It Off’s T-shirt designs, the one that plays with the panda bear logo of the World Wildlife Fund.

According to an article on Moneyweb, Laugh it Off has written to the Pepkor Group, the owners of the Jay Jays brand in South Africa and accused them of copyright theft, rather ironic considering that Laugh It Off has made its name by taking other companies brands and logos and manipulating them to make social comment. Pepkor has denied that it has violated copyright. 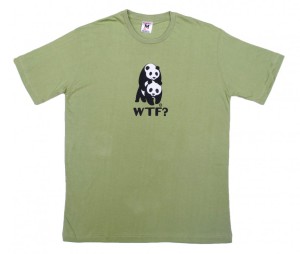 Laugh it Off’s brand of satire famously resulted in SABMiller taking it to court for trademark infringement, a battle that ended up in the Constitutional Court in 2005. A battle that Laugh it Off famously won. SABMiller had objected to Laugh it Off changing their tagline, “America’s lusty, lively beer, Carling Black Label beer, enjoyed by men around the world” to read “Black Labour White Guilt, Africa’s lusty lively exploitation since 1652, no regard given worldwide”. 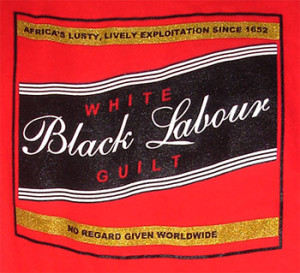 Laugh it Off’s case on its rights to freely satirise, which went all the way to the Constitutional Court, was worth supporting. But exception must be taken to its new logo manipulation targeting Jay Jays by replacing the brand name with “Gay Gays”.

Neither I, nor The Con, hold any a position on the intellectual property rights issue they may have with Jay Jays.

The objection is merely that – at a moment in South Africa’s history when we are in need of more rigorous debate, including among the country’s satirists, comedians, praise singers and court jesters – they are being  facile ten-year-olds.

And most abhorrently, homophobic. Grow up.

In the open letter from Laugh it Off; the satirists defend their new logo manipulation of Jay Jays. Responding to the accusation from Moneyweb that their complaint against Jay Jays was a case of “the pot calling the kettle black”, Laugh it Off – with tongue firmly placed in cheek – insisted they would never call Jay Jays “black”, as that would be “racist”.

“We’d rather call them gay,” reads the letter.

“And we don’t mean that in the awesome, homosexual sense, but rather in the lame, weak and creatively bankrupt way.” Clearly Laugh it Off doesn’t have the same standards when it comes to homophobia as it does to racism.

Sorry Laugh it Off no matter how you spin this, there is no way you can explain away the fact that you chose to use the word “gay” to tarnish the brand Jay Jays. By doing so you give the word “gay” negative connotations, which is homophobic.

What were you thinking? My bet is that you have pissed off pretty much the entire lesbian, gay, bisexual and transgender community (LGBT) and many heterosexual South Africans who can’t stand to see this kind of homophobia in society.

For a bunch of creative minds, this is just pathetic. It’s not funny and you come across as creatively bankrupt as you accuse Jay Jays of being.

With a rising homophobia on the African continent and numerous countries beginning to legislate against homosexuality while jailing gay and lesbian citizens, this is a very irresponsible and hate-filled act.

Closer to home in South Africa, members of the LGBT community are routinely persecuted, with hate crimes such as rape and murder reported in our newspapers, sometimes on a daily basis. This makes your lazy attempt at satire even more worrying.

A theatre piece titled Hate Radio, which toured South Africa this month, explored how humour was used to sell racism and bigotry in Rwanda in the build up to the Rwandan genocide.

Bigotry delivered as a means to entertain is something that should not be tolerated in any society and this makes your lame  Jay Jays joke despicable.

Perhaps its time for a public apology and to seek help for your homophobia. Oh wait, let me guess, some of your best friends are gay?