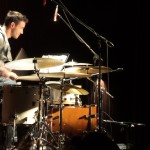 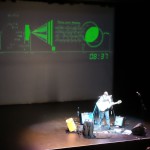 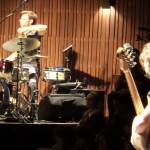 The audience stares at the stage. The sight they are greeted with appears to be part man, part robot, part guitar. Thick black cables run down from the white Gretsch strapped on to guitarist Jonathan Crossley’s body. By his feet lie a whole host of effects pedals. Down his arms runs an electronic exoskeleton, which makes Crossley look like he is recovering from two severely broken arms. Behind Crossley, on a big screen, there is a projection of what looks like some form of scientific diagram, which appears to map out what the audience can expect over the next 45 minutes. It is in some symbolic language that doesn’t make any sense to laymen like myself. A digital clock counts down on the screen below the diagram as Crossley shuffles around, preparing for the start of his PhD recital. The anticipation is palpable in the Wits Theatre, which is pretty much packed to the rafters. In the left and right corners of the theatre, above the audience, sit Jonathan Sweetman and Justin Badenhorst at full drum kits. In between them, right at the back of the theatre, stands jazz and experimental music legend Carlo Mombelli, his bass ready for action, his grey hair glinting in the light.

Crossley’s PhD is titled T.E.P.P, which stands for Technologically Enabled Performance Practice. A programme note explains what the audience is about to witness. “This premiere performance is the realisation of five years of research and development, and features a unique approach to musical instrument design and performance practice through extended use of technology,” it reads.
So far so good, but then it gets complicated. It goes on to explain that the guitar that Crossley has around his neck has been “hardware hacked” and contains hacked effects processors, multiple signal paths, a three-way digital recording matrix, an upper-body suit (the strapped-on exoskeleton) with 54 continuous controllers and a custom-designed arduino board.

“The instrument system itself is completely software free – no PCs or laptops (aside from the arduino) are engaged actively whatsoever in the performance and further no music is pre-prepared in a recorded audio format whatsoever. All music is improvised wholly live,” reads the explanation. “This is completely unlike traditional music, which is either pre-prepared or improvised over a predesigned set of constraints.” “This system is set up with a kind of chaotically driven unpredictability within the technological matrices – kind of like developing a system to find out what happens when a butterfly flaps its wings – a musical imagination of chaos theory or fractal geometry, if you like.” “Additionally, the score itself contains very little fixed detail,” reads the programme note. “This is unique and is designed to facilitate an unprecedented interface and improvisational experience between musicians, musical score and also technology. What we are envisioning is music of a chaotically ‘sentient’ nature.” To put it simply, the three signals from the guitar are sent to the three accompanying musicians who are all wearing earphones. Sometimes they improvise with the whole sound and sometimes only with parts.

Tonight’s performance is on the second and closing night of the Edge of Wrong musical festival’s Johannesburg run, which trades in experimental music. The festival is now on its way to Cape Town for three more shows this weekend, February 28 to March 2. The festival was initially realised as a unique two-day festival in Cape Town in 2006 after Norwegian Morten Minothi Kristiansen finished studying at the South African College of Music. The focus of the event was to gather different modes of improvised music, but it has since expanded to include art that is not improvised or even musical but pushes boundaries of sound exploration. Since 2006, the festival has been held annually in Cape Town and four times in Norway. Artists from afar as Switzerland, Sweden, Namibia, the United States, Mozambique, Zimbabwe, Turkey, Iceland and Germany have featured over the years. This year, artists from South Africa, Norway, Switzerland, France, Sweden and the US are taking part.

When it comes to a chaotic musical encounters such as this, it is obviously difficult to describe, but for the full 45 minutes I was captivated. At times I was reminded of the experimental soundscapes of Pink Floyd and at other times the anarchic punk prog-rock of The Flaming Lips, but, to be fair, this was a sound performance unlike any you have ever heard before. As squeals and squelches emerge from Crossley’s guitar, Sweetman and Badenhorst use all manner of techniques to create sound, from innovative use of cymbals to scraping brushes across the tom drums to create a fuzzy haze. At one point Badenhorst climbs off his drum stool and begins to scrape it across the wooden floor, creating a deathly grinding hum. Mombelli works his bass through his arms, almost rolling it around as he plucks the strings. At times the tone of his bass is so manipulated it sounds like a high-pitched horn screeching for all its life. At other times Mombelli runs through a deep bass line as Badenhorst and Sweetman pound on their drums as if their lives depend on it. It’s a cacophony of sound.Crossley’s guitar sounds like the raptors fighting in Jurassic Park. His arms flail around as the exoskeleton manipulates the guitar’s tones.

Thirty-five minutes in, there is suddenly dead silence. Slowly the musicians get going again. By the 38th minute, the sound is what I can only describe as death-jazz, but it segues into a slower-paced section, with Crossley’s guitar sounding like the notes are floating in space. And then it’s all over. The audience roars with approval. Crossley waits patiently to thanks his fellow improvisers, but the crowd roars on. It’s a night of experimental music I will not forget in a hurry. Brilliant, bloody brilliant!

The Edge of Wrong in Cape Town