Want to hear the future sound of art-pop? Her name is Annie Clark, but you’re more likely to know her by the name St Vincent. I know most of you know this already. Sorry, I’m assuming some have to play catch-up. She has a new album out and it’s called St Vincent. Yes, self-titled. This is her fourth solo album. Her last was 2011’s Strange Mercy, a snarling psychedelic riff-monster of an album buried beneath a shimmering pop veneer. Punk’s dead. Pop’s dead. What? Oh, get over yourselves and listen to this.

That was then, 2011. Then, a bit later, like 2012, there was the collaboration with David Byrne, titled Love This Giant, a glorious melding of creative worlds littered with horns and stirring pop songs, as hook-laden as anyone could possibly wish for. Yes, it’s that good.

So now that we are up to speed, here are some thoughts after a few weeks of listening to the new self-titled album. It’s good. It’s bloody great. It’s going to love you forever. 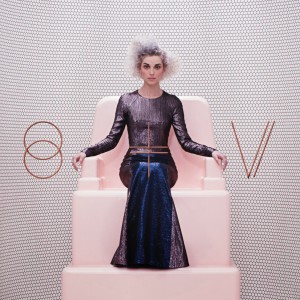 The opening track, Rattlesnake, is a digi-funk monster, with Clark finding herself confronted by a rattlesnake while taking a nude walk in the wild. It’s a true story and the fantastic p-funk inspired groove just adds to the comical menace of the anecdote. Clark has cited Parliament and Funkadelic as influences for the new record many times over the past few weeks in album release interviews.

The track reminds me of the solo work of Fiery Furnaces’ front woman Eleanor Friedburger, a kind of edgy yet sublime pop music. I’m tempted to say that you can almost hear a touch of Talking Heads in there, but maybe I’m just overemphasising the fact that Clark recorded with Byrne. As she begins to shred on guitar two and half minutes into the song, it’s clear that the new St Vincent album is going to be something to behold.

Next up is the single Birth in Reverse, which was released in December last year. It’s a stomping garage rock number that has great hooks and sounds like The Buzzcocks if they were fronted by Kate Bush. The guitar riffs are just so damn catchy and Clark’s voice is as beautiful as ever, soaring above the din. When the song locks into an angular guitar groove at the end, I’m sold.

Eighties gospel synth is the best way to describe Prince Johnny, as the album reins in the freneticism and begins to soothe the listener. A killer beat, angelic choir and some scuzzy guitar flourishes combine to mesmerising effect. This is French electronic outfit Air meets late-ear Roxy Music playing in heaven, the way Byrne imagined it.

Huey Newtown is an album highlight, sounding like a treacle-drenched Beth Gibbons (Portishead) singing over beats by Dr Dre, until almost three minutes in, when the song takes on a blues snarl reminiscent of PJ Harvey. Hearing Clark roaring above what sounds like Grinderman backing her is a powerful proposition.

The B-side to the first single Birth in Reverse was the funk vamp Digital Witness, which again has signs of Byrne’s influence and could have easily been included on Love This Giant. Along with the spectacular Every Tear Disappears, the two songs lyrically explore today’s hyperconnected world and the culture of oversharing information on social media platforms. On Digital Witness, Clark sings, “Digital witnesses / what’s the point of even sleeping? / If I can’t show it, you can’t see me? / What’s the point of doing anything? / This is no time for confessing / Mm, I want all of your mind.”

Talking to The Vine a few weeks ago, Clark said about the lyrics: “I’m not necessarily even criticising the way we are now. I’m just kind of curious about the effects it’s having on our brains. Consciously or unconsciously the way we choose to present ourselves says things about us,” she said. “We may be aware of those things, or maybe not. But, so, we have this digital world, which is this whole other means of performing our identities. In that world it becomes about the things we like and the tweets we tweet, or whatever … but what it does is make people very self-aware,” she went on. “Which I don’t think they were in the past. I wonder if it’s some sort of subconscious defense mechanism; we’re making ourselves more transparent in an attempt to reconcile that we know we’re being watched.”

On Every Tear Disappears, Clark sings, “Call the 21st century / Tell her ‘Give us a break’.” Later she repeats the lines, “Yeah, I live on wires / Yeah, I’ve been born twice.” It’s like a message being sent out into space in the digital equivalent of a note in a bottle. It’s all Depeche Mode synths and hip-hop beats, but performed by Kraftwerk.

I Prefer Your Love

I Prefer Your Love is an ethereal ballad that sounds like it was recorded by Sinead O’Conner in the 90s. It sees Clark exploring existential themes, a young woman seeking redemption, but not in God. “Mother, won’t you open your arms and / Forgive me of all these bad thoughts / I’m blinded to the faces in the fog / But all the good in me is because of you / It’s true,” croons Clark. “I, I prefer your love / To Jesus / I, I prefer your love / To Jesus.”

Like Kate Bush, backed by Yoshimi Battles the Pink Robots-era Flaming Lips, with a full horn section at their disposal. It’s a stellar song, I don’t need to say more.

Bring Me Your Loves

Bring Me Your Loves is another digi-funk banger that sounds like a p-funked mutation of Konono No 1. Around about the 1:30 mark I was reminded of the genius of Lark’s vocalist Inge Beckmann. Then a guitar riff that sounds like it’s straight out of the Western Sahara. “I took you off your leash / But I can’t make you heel,” sings Clark. She has described this song as a mix between the groove metal of Pantera and Turkish folk rhythms. I guess that leaves it up to you to make of it what you want.

This is the straight-ahead rocker in the gang. Well, that is until the song hits the chorus and it bellows out, like late-period Roxy Music meets Kate Bush. I know I have referenced Bush a lot, but there really are some striking similarities.

What a way to close an album. It’s a gorgeous little slow song, the kind that Suede perfected in the 90s. If you don’t know what I’m talking about, listen to the Suede collection Sci-Fi Lullabies. But this is not a review of Suede, I mean who really cares about them anymore, right?

Severed Crossed Fingers is beautiful, overwhelming. It’s a highlight off a skyrocketing album that is about to redefine what it means to be a pop consumer in the modern age. Well, that’s my dream anyway. After all, Bob Dylan did once say, “I’ll let you be in my dreams if I can be in yours.”

Buy this album now. It really will love you forever.