Living in Grahamstown, a small settler town that began its life as a fort on the colonial frontier, is often hard work.

On most days it seems that the spirit of John Graham, the British soldier sent to drive the Xhosa across the Fish River in 1811, would feel more at home in this town today than that of Makhanda Nxele, who, seven years later in 1818, led an attack on the colonial fort.

But here and there daily life throws up sometimes surprising moments of inspiration. And every now and then we are richly indulged by visits from remarkable people.

February 26 2014 was another red letter day in this ugly little town. The Institute of Social and Economic Research (ISER), the School of Journalism and Media Studies, and the International Office collectively hosted the acclaimed documentary filmmaker Estela Bravo.

Three of her documentaries were screened and discussed in a single day. Bravo (84) handled this punishing schedule with aplomb.

Bravo is an American documentary filmmaker who has lived in both in Latin America and the United States for the past 48 years. Her lifetime of work documents the human consequences of historical events and has led to the production of 30 award-winning documentary films.

Bravo’s films have focused on the human effects of conflicts aimed at achieving social justice throughout Latin America, Africa, the Caribbean and the United States. She has developed a reputation for representing the voice of ordinary people through film with great dignity and eloquence.

It was the dignified representation of the voices of ordinary people that most impressed a small gathering of students and staff at a workshop held at the School of Journalism and Media Studies on the morning of February 26, where the first film of the day, Holy Father and Gloria (1987), was screened.

This emotionally penetrating documentary captures the visit of Pope John Paul II to Chile and his meeting with Carmen Gloria Quintana Arancibia, a young woman who became a symbol of Augusto Pinochet’s repression.

On July 2 1986, Gloria, a young student, along with a young photographer, Rodrigo Andrés Rojas De Negri, who had recently returned from living in the US, went on a student protest in the neighbourhood of Los Nogales, Santiago. Arancibia and De Negri were both attacked and beaten by the military police and later soaked with petrol and set on fire.

Once the flames had subsided, they, both unconscious, were wrapped in blankets by the military and dumped outside the city of Santiago. They were later found and, after several attempts to admit them into hospital were rebuffed, they finally received treatment.

De Negri died of his burns. His mother, who had fled Pinochet’s terror by moving to the US, was offered a small consolation; when she arrived in Santiago, her only consolation was being able to touch the toe of her badly burnt son before he died.

Arancibia, still critically ill, was moved to a hospital in Canada. She survived but was badly disfigured from her burns. When the Pope was to visit Chile in 1987, Arancibia, like many Chileans, sought his blessings and hoped he would work a revolutionary miracle.

Through tracing the journey of this quietly strong young woman back to Chile to see the Pope, Bravo was able to capture the turbulence of a nation living under a ruthless, American-backed dictatorship that set the agenda for the form capitalist development would take for the next 30 years.

Intentionally or not, the Pope’s visit worked a miracle. Within just more than a year, Pinochet’s bloody reign of torture and terror, which had killed 2 000 people and tortured more than 27 000, came to an end.

Bravo’s camera captured the pain and burning spirit of rebellion of Chileans in the face of savage repression. But she also recorded the voices of elites supporting Pinochet.

The discussion and questions that followed the screening showed how deeply the students were moved by Bravo’s ability to disarm her interviewees, and to retain the true spirit of the moment. It is the humanity of her subjects that comes across powerfully on celluloid.

The humanity of her subjects was also luminously present in the second documentary, After the Battle (1991), which was screened later that afternoon to a huge audience. This documentary, which was first screened on BBC’s Channel 4, powerfully recounts the stories of Cuban, South African and Angolan soldiers who participated in the epic battle of Cuito Cuanavale in Angola in 1987. 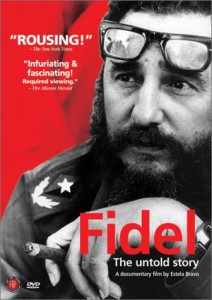 While the film deals with the political consequences of the battle, its real strength lies in the interviews Bravo carried out with the families of soldiers on both sides of this conflict. Bravo’s ability to capture the consequences of war and political ideology on Cuban and South African soldiers lays bare the pain, trauma, conflict and humanity of the grieving families.

Capturing the stories of soldiers and their families on both sides of the conflict provided us with a far more nuanced and humane insight into a very painful event of our past than anything allowed by either apartheid or nationalist history.

Bravo offers a complex story of people caught up in historical events that, while it eschews the more typical polemics about good versus evil, doesn’t fail to draw a clear distinction between emancipation and oppression.

Bravo’s nuanced depiction of this war contrasts the spirit of the Cuban soldiers and their desire to support a struggle for liberation with the disillusionment of the soldiers of the South African Defence Force.

The Cuban families, both black and white, of fallen soldiers really understood what their children had died fighting for. It was a cause they understood and supported.

The families of the fallen South African soldiers were often unsure of the reasoning behind the battle and at times were completely unsure about the apartheid state.

As well as showing us of the way in which apartheid extended its devastation beyond our borders, the film also reminded us of the importance of Cuban solidarity in our liberation struggle. This was a form of solidarity that not only worked to liberate Namibia but also inspired activists locally.

In his introduction at the screening of After the Battle, Robbie van Niekerk, a professor who was an activist on the Cape Flats in 1987, recalled how, for him, the “gesture of solidarity on behalf of Cuba was inestimable and seared into the consciousness of my generation”.

This solidarity reminds us that the Cuban state offered this region of the world, and its citizens, assistance against oppression without expecting any reward in return. In this respect, the US, which has wreaked such devastation in countries like Haiti, Palestine and Iraq in recent years, could learn a lot about the real meaning of international solidarity from a tiny neighbouring island just off its coast.

The importance of Cuban solidarity with our struggle was made clear by a newly free Nelson Mandela in 1990. Whereas After the Battle led us into the heart of a dark but still redemptive moment in our history, the third film of the day – and the second of the evening – led us to a celebratory moment of our history.

Mandela and Fidel (2013, 30 min) recounts the friendship of Mandela with Cuba’s Fidel Castro.

Given the figurative and literal stature of these men, it would be a difficult task not to paint them as extraordinary figures. But rather than getting a story of two giants of history, one watches shot after shot of the touching, lovely and joyful friendship Mandela and Castro shared.

Bravo captures for all the sincerely deep love and respect both men had for each other.

Once again, like Carmen Gloria Quintana Arancibia, or young schoolchildren in Chile, or white South African soldiers fighting for apartheid, Bravo is able to capture the humanity of Mandela and Fidel.

It’s a humanity that is often lost in the cruel machinations of politics, ideology and nationalism that eviscerate the human cost of domination.

February 26 was a good day in Grahamstown. Bravo Estela.