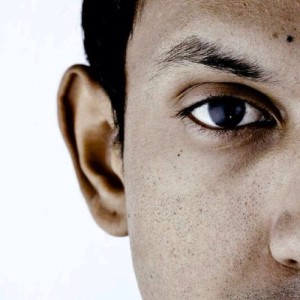 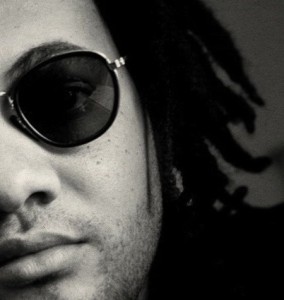 With Saturday night of the Jazz Festival upon us, here is what The Con recommends for night two.

First up, two of South Africa’s brightest young jazz pianists, Kyle Shepherd and Bokani Dyer, will be performing together at 5:15pm. This should be a treat as Shepherd is possibly the best young South African jazz musician at the moment, and Dyer was smoking when he played in the Shane Cooper Quintet last night. Here is what the programme has to say about these two pianists:

“Bokani Dyer comes from a musical family and at the age of 14 took up formal piano studies, which allowed him to be accepted into the jazz programme at the University of Cape Town, from which he graduated in 2008. In 2009 Bokani won a scholarship for further study in the Samro Endowment piano competition. He went to New York, where he was tutored by Jason Moran, and his talent was recognised when he won the the Standard Bank Young Artist Award in 2011. Dyer has recorded two albums under his own name. His debut album, Mirrors, was released in 2010, and provides a strong indication of the style and artistic trajectory he continues to pursue. Emancipate the Story (2011) is his second album.”

“Kyle Shepherd is an in-demand, multi-award-nominated virtuoso pianist, composer and band leader. He is recognised locally and abroad as one of the most progressive jazz composers and performers of his generation. He has released four albums, which have been received with critical acclaim from an international audience. Shepherd is the current Standard Bank Young Jazz Artist.”

After the pianists perform it is time for a South African jazz legend as Abdullah Ibrahim and his large band, Ekaya, take to the Rosies stage at 7pm. Do we really need to convince you to go to this gig? It’s a must-see.

The Blue Notes Tribute Orkestra is another must-see at the Rosies stage at 8:45pm. The band is made up of Andile Yenana on piano, Marcus Wyatt on trumpet, Mthunzi Mvubu on alto saxophone, Janus van der Merwe on tenor saxophone, Thembinkosi Mavimbela on upright bass, Ayanda Sikade on drums, and Siya Makuzeni on voice and trombone. The Blue Notes Tribute Orkestra, as its name suggests, was formed to commemorate The Blue Notes, a legendary South African jazz sextet from the 60s. The Blue Notes in their day featured Chris McGregor on piano, Mongezi Feza on trumpet, Dudu Pukwana on alto saxophone, Nikele Moyake on tenor saxophone, Johnny Dyani on bass and Louis Moholo on drums. This is what the programme says:

“Most of these great musicians lived and died outside of their beloved country. The Tribute Orkestra endeavours to bring their music back to South African audiences and to keep the traditions of the free approach to South African jazz alive − almost 50 years later.”

Then we’re faced with a dilemma. Soul queen Erykah Badu performs on the Kippies stage at 11:15pm at the exact same time that Chris Dave and the Drumhedz are on the Moses Molelekwa stage. Everybody knows Badu, and for those who don’t know, Chris Dave is the drummer from Robert Glasper’s band. This is a tough call. Here is a little of what the programme says to help you make your decision.

“Badu’s groundbreaking debut, 1997’s Baduizm, was more than just an album − it was the introduction of a new lifestyle. The music evoked speakeasies, incense, head wraps and boho coffee shop culture all in one easy breath. Propelled by the lead single, On & On, the album went multiplatinum. Her subsequent albums have all had similar results.”

“Known as ‘probably the most dangerous drummer alive’, Chris Dave has been around the world and back, playing for and recording with some of music’s most established and iconic artists, including Adele, Maxwell, D’Angelo, Beyoncé , Kenny Garrett, Terrence Blanchard, Wynton Marsalis, Pat Metheny, Donald Brown, MF Doom, Bilal, Lupe Fiasco and Me’shell N’Degeocello. Dave’s eccentric approach to the drum set and his ability to adapt to any musical setting makes him one of the most in-demand drummers of his generation − whether he’s playing jazz, hip-hop or R&B.”

As the Cape Town International Music Festival looks back over the past 15 years of its existence, The Con brings you some of the best moments captured by photographers over that period. These are merely a sample of what to expect at the Duo-Tone Gallery, based at the Cape Town International Convention Centre, which has both a retrospective of the festival and an exhibition remembering, and bidding farewell, to former South African president, Nelson Mandela, who died in December last year. 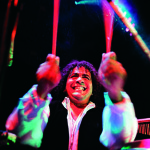 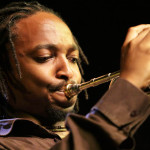 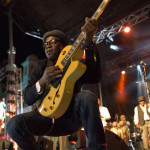 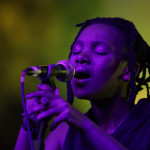 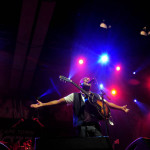 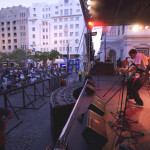 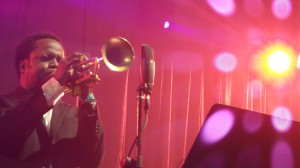 American trumpeter Ambrose Akinmusire showed everyone how it was done on the Moses Molelekwa stage. Despite a disrespectful crowd, which talked the whole way through his set, Akinmusire delivered a magnificent hour of the most captivating jazz this reviewer has ever heard. Intimate and fragile one moment, bold and barnstorming the next, the 100 or so punters left when he brought the show to a close rose to their feet and delivered a standing ovation. The bookish Sam Harris was magnificent on piano and the lanky Walter Smith III was in a constant body flow, like a hen clucking, shoving his chest out as he pushed out every note. There was nothing standard here, nothing expected, just pure, beautiful sonic exploration that reminded the audience just how magical  jazz can be. -Lloyd Gedye 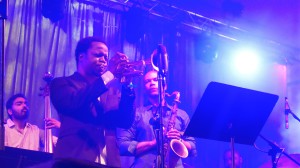 Just went to catch Dr Philip Tabane and Malombo only to be told I needed  another ticket to get into the Rosies stage, which made me really angry. When the line-up was announced late last year, I went online and bought my tickets and booked my flights. The line–up looked too good to miss. Tickets were R750 for a weekend pass − pretty steep, but hey, there were more than 10 shows I really wanted to see.

Only tonight did I find out that six out of those 10 shows were at the Rosies stage, and I was expected to pay extra for every one of them. I have been on the website a few times the past few weeks and I saw nothing about this. When I bought my tickets there was no disclaimer. What the fuck? What kind of rip off is this?

That got me thinking: why is this not an issue that’s been interrogated in the media over the past few years? Then it dawned on me: the media writing the rave reviews get in to see everything, so they have no reason to complain. It’s just the punters who are getting screwed, the people who spent their hard–earned cash thinking they were going to get to see all the advertised bands, not half of them. The lady selling these additional tickets at Computicket tried to tell me it was about restricting numbers, but that’s a load of crap. If that was the reason, you would just go collect a ticket for free to secure your place. I am very disappointed, Rashid Lombard. It’s disgraceful. 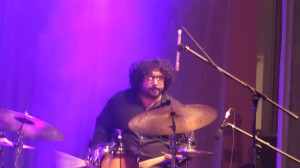 Any pretensions towards international superiority on the first night of the Cape Town International Jazz Festival were repudiated by the Shane Cooper Quintet, which gathered together some of South Africa’s finest young musicians to make Cooper’s set at last year’s National Arts Festival (where he was named Standard Bank Young Jazz Artist of the year) appear tame and safe.

Unlike Snarky Puppy, which performed before them on the Moses Molelekwa stage, the Cooper quintet were technically brilliant and soulful. They delivered a powerful set of hard-banging jazz. The fire in their  belly came from drummer Kesivan Naidoo, who was a monster, as Bokani Dyer and Justin Bellairs wailed on piano and saxaphone respectively. Reza Khota joined them on guitar.

The set was closed by the trio of Naidoo, Cooper and Khota, who powered their way through an old Led Zeppelin rocker that had the crowd cheering.

The Cape Town International Jazz Festival’s Duotone Gallery has, over the years, focused on the inextricable relationship between jazz music and photography.

Over the past 15 years luminaries such as Alf Khumalo, Mike Mzeleni, Basil Breakey, Fanie Jason, George Hallett, Herman Leonard and Uli Paschewoschny have all been the subjects of retrospective exhibitions.

This year, the exhibition pays tribute to former South African president, Nelson Mandela, who died in December last year, and showcases some of the best snaps by photographers who have covered the festival.

Some of the best work to emanate from the festival’s Jazz Photography Workshop, run by Peter McKenzie, from the past few years will also be showcased.

The Con whets the appetite with some snaps of drummers: 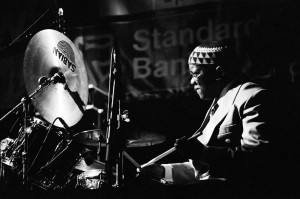 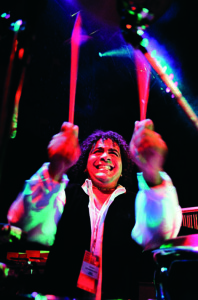 The Cape Town International Jazz Festival is upon us once again, and the 2014 line-up looks particularly good. Obviously, there’s the usual, middle-of-the-road schlock to keep the house-heads and the old-timers happy. The Con has already raved about Ambrose Akinmusire, who performs at 11.45pm at Moses Molelekwa stage on Friday night. This is what the programme has to say about Ambrose. 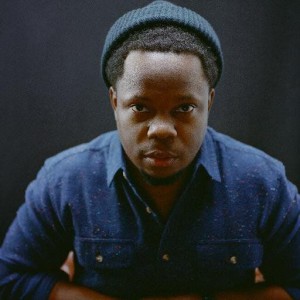 “The winner of both the 2007 Thelonious Monk International Jazz Competition and the 2007 Carmine Caruso International Jazz Trumpet Solo Competition, Akinmusire has proved himself one of the most vital and deft trumpeters of his generation. He was named Rising Star Jazz Artist and Rising Star Trumpet in DownBeat Magazine’s 2011 Critics Poll, graduating to Trumpet Player of the Year in 2012. He earned the same title in that year’s Jazz Journalists Association awards, as well as being awarded Germany’s ECHO Award as Instrumentalist of the Year, International Brass.”

Friday evening’s dilemma is that Philip Tabane’s performance at Rosies begins at 11pm, which means if you want to catch Ambrose you are going to miss the last half of the great guitarist’s set.

Click on the programme below to see it in large form 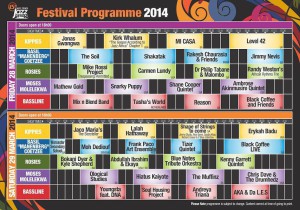 Otherwise, it’s pretty obvious what the highlights are on Friday night. They start with Jonas Gwangwa playing at 7pm at the Kippies stage. Born in Orlando East in Soweto, Gwangwa is a child of the turbulent 1950s. He is a legend of South African jazz, and has shared the stage over the years with some of our best and brightest. His promises to be a great set of South African jazz. The programme says:

Another highlight should be the Shane Cooper Quintet, who play at the Moses Molelekwa stage at 10.15pm. Cooper was last year’s Standard Bank Young Jazz Artist of the Year and his quintet usually features some of South Africa’s best young jazz musicians, so this should be a treat.

Once Akinmusire is done at 1am, you might want to head back to Rosies and catch the last half hour of the Randy Weston’s African Rhythms Trio’s set, which begins at 12.30am and features Alex Blake and Neil Clarke.  This is what the programme has to say:

“The multi-award-winning pianist and composer was born in Brooklyn, New York, in 1926. He didn’t have to travel far to hear the early jazz giants who were to influence him. Weston cites Count Basie, Nat King Cole, Art Tatum and, of course, Duke Ellington as his piano heroes, but it was Monk who had the greatest impact. In the late 1960s, Randy left the United States and settled in Morocco, and has travelled extensively throughout the continent whose rich musical tapestry continues to influence his work and enthral his fans.”

Those are our tips for the first night of the Cape Town Jazz Festival. Check back later for write-ups, photos and videos.