The Cape Town International Jazz Festival kicked off with a bang at 5:15pm on Saturday with a duo set by South African pianists Kyle Shepherd and Bokani Dyer. With two pianos set up next to each other on the Rosies stage, Dyer launched into a playful rendition of his song Vuvuzela. There was clearly a sense of glee from the two pianists as they played together for the first time, and the subtle facial expressions they shared with each other, their way of communicating mid-set, were evidence of this. The set highlight was the third piece, titled African Piano. It was written by Dyer and, as he explained on the night, is a series of small compositions sewn together. He mentioned that it was conceived as having piano overdubs, which explains why the duo decided to perform it together for this show. Shepherd was like a Zen master during this piece, banging out a minimalist funk rhythm, which sits in a musical world somewhere between the purple one, Prince, and Swiss pianist Malcolm Braff. There was not a note of excess from Shepherd; it was all about economical form. Every note had maximum impact, while Dyer added flourishes over the top.

Shepherd didn’t restrict himself to piano during the set, playing saxophone on one composition and xaru (a traditional mouth bow) on another. The pair also delivered a beautiful performance of Past Lives, off of Dyer’s debut album Mirrors (2010), while Shepherd’s compositions City Monk and Flying without Leaving the Ground were also included in the mix. During the latter, Shepherd’s rear end left his bench and began to hover over it as he continued to play. The smile on his face made him looked as though the MDMA had just kicked in. Shepherd was clearly loving every minute of this set – and so was the audience. 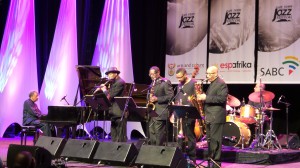 Next up on the Rosies stage was Abdullah Ibrahim and Ekaya. The grand master of South African jazz appeared to be in as grumpy a mood as ever, glaring at press photographers snapping away just off the stage; in the middle of his performance he waved angrily at an official festival photographer to remove himself from backstage. But once he had laid down the law he settled into a mesmerising set that had the packed Rosies stage roaring with approval. 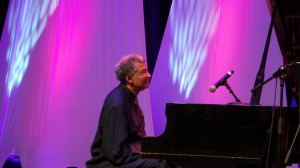 The set was dominated by compositions from his 2011 album with Ekaya, Sotho Blue. The band, featuring Cleave Guyton (alto sax / flute), Lance Bryant (tenor sax), Marshall McDonald (baritone sax), Andrae Murchison (trombone, French horn), Noah Jackson (bass) and Will Terrill (drums), were the epitome of precision; the horn section combined so well, it was if they spoke with one voice. They were so mellow, so mournful; it was like angelic blues mainlined from the most celestial source. If there is a jazz band in heaven – or Jannah, considering Ibrahim’s religious persuasion – surely their name is Ekaya. 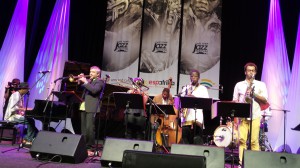 It seemed the Rosies stage was the place to be on Saturday night, because at 8:45pm the Blues Notes Tribute Orkestra took to the stage. This band, featuring Andile Yenana (piano), Marcus Wyatt (trumpet) Siya Makuzeni (vocals and trombone), Mthunzi Mvubu (alto sax), Janus van der Merwe (tenor sax), Thembinkosi Mavimbela (upright bass) and Ayanda Sikade (drums), are truly something to behold. Their takes on compositions by the great South African jazzmen Dudu Pukwana, Chris McGregor and Johnny Dyani were playful and damn infectious, with many punters confirming that it was their favourite gig of the entire jazz festival – and it was clear that many people walked away from the show on a high. 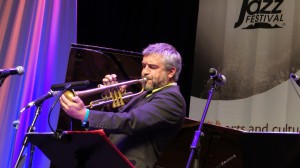 Their renditions of Dyani’s Confession of Moods and For Leo were both performed with aplomb, and their version of McGregor’s Do It was another highlight. The band closed their magnificent set with a piece written by Pukwana about Jonas Gwangwa; it was a fitting way to end the set, connecting the Blue Notes to a more recognised jazz history in South Africa. After all, the great jazzman played at the festival on Friday night.

It seems the festival was saving the best for last. The last act on the Rosies stage was Kenny Garrett, the alto saxophonist who played with Miles Davis for five years and won a Grammy last year for his album Pushing the World Away. The Washington Post said “someone should post a storm warning before a Kenny Garrett concert”, and after the band opened their set in spectacular fashion, I knew exactly what they meant. To describe this band as a powerhouse is no exaggeration, from drummer McClenty Hunter to bassist Corcoran Holt and pianist Vernell Brown Jr, this band is serious. I had planned to catch the first 30 minutes of the set and then make my way to see Chris Dave and the Drumhedz on the Moses Molelekwa stage. Needless to say, leaving didn’t even cross my mind and I stayed firmly rooted to my chair. The sheer force and precision of the band was something to behold – hands down the best act of the festival. 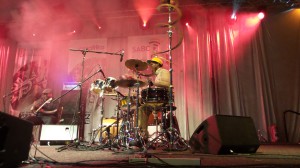 When I arrived at the Moses Molelekwa stage to see if Chris Dave was still on, I was pleasantly surprised to find that because of sound difficulties their set hadn’t even started yet. Dave, who used to drum with Garrett, as well as with the Robert Glasper Experiment, was another force of nature. His band, whom I can’t name as they were confirmed too late for inclusion in the programme, was tight. The set felt more like a jam session than a performance, but it was killer nonetheless. Dave would pick a rhythm and begin to play, and the bassist and guitarist quickly fell in line, blending funk, hip-hop, Afrobeat and R&B into a sound that was unlike anything else heard at the festival this weekend. 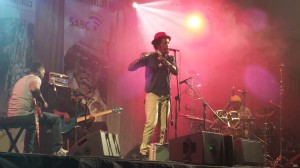 “That band was so good, they have convinced me to give up my dreams of being a musician,” said one punter to me when the set ended. They were groove monsters and the younger audience reveled in their incredible style. It was a fitting close to the festival for those of us looking for a pointer towards where jazz is heading, not where it has been. Those who chose to ignore the pull of the headliner, Erykah Badu, were richly rewarded.

All Photos by Lloyd Gedye