Time to burn the Numsa T-shirt. I’ve finally been busted for the conservative and purist I really am. That, at least is the conclusion you might draw if you saw me scrambling for tickets for the Rosies stage at last week’s Cape Town International Jazz Festival. Because, according to one online contributor for a weekly newspaper who ought to know better: “Rosies – one of that (sic) stages that required a second ticket – was where conservative jazz lovers and purists sat to see the Mike Rossi Project, Carmen Lundy, Dr Phillip Tabane and Malombo and Randy Weston’s African Rhythms Trio.”

Bad grammar and lack of research aside (Rosie’s is the only stage commanding a supplementary fee), the writer is riffing on a perennial topic: is jazz dead or does it just smell funny? CTIJF15 might be quite a good place to look for answers.

For those who don’t know, the two-day festival runs across five stages. The largest, Kippies, is where the biggest crowd-pullers have to go, but it has acoustics like sloppy mashed potatoes. The outdoor Manenberg stage can freeze on a typical Cape Town March night, so it generally features sounds that’ll keep you moving and warm. The tented Bassline is set up for club music and DJs. That leaves the upstairs Molelekwa and Rosies stages: both slightly smaller; the former with unreserved seating; the latter a strictly controlled theatre with the best acoustics of the lot. Quite simply, Rosies is where you should put the music that merits the most careful listening. 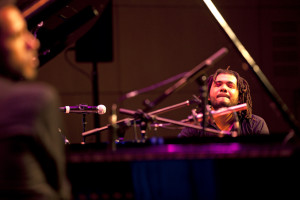 As for conservatism, that’s had a range of meanings in the jazz world over the years. For Frankfurt School critical theorist Theodor Adorno, jazz was conservative because it merely pretended invention. Among other things, he declared, improvisation was “largely rehearsed”. Fellow Marxist scholar and music critic Eric Hobsbawm commented that Adorno had produced “some of the stupidest pages ever written about jazz”.

In the Europe of the 1950s and 1960s, “conservative” was the label attached to the Trad Jazz movement: a dedicated cadre of ageing white men, totally in love with the New Orleans jazz of the 1920s and striving to reproduce it, often with great technical proficiency – an obsession gently but incisively satirised in the Scandinavian movie All Danes Play Dixie. Their conservatism was shaken up profoundly when Chris McGregor and the Blue Notes landed in London; in the words of jazz writer and photographer Val Wilmer, the South Africans “literally overturned” the London scene. And, oddly enough, it was on the Rosies stage that Marcus Wyatt, Siya Makuzeni, Andile Yenana and the rest revisited the compositions of the Blue Notes in the Blue Notes Tribute Orkestra.

It was definitely revisited, not covered. Melodies from Johnny Dyani, Dudu Pukwana and Chris McGregor were deconstructed and reassembled; within the larger ensemble, groups of two or three conversed over, around and against those melodies with edgy, acid jazz-flavoured grooves. Makuzeni wove in Xhosa praise poetry, guttural vocalese and jazz scats as well as trombone solos. She is an astounding musician, even alongside six others. How does Wyatt make his standard horn sound like Mongezi Feza’s pocket version? Why she has not yet been named Standard Bank Young Jazz Artist remains a mystery. Conservatism implies fixed boundaries; this, Yenana declared, was “music that sets you free”

The next wave of world jazz conservatism also related to New Orleans: in the 1980s, Orleans-born Wynton Marsalis and his fellow Young Lions (a marked absence of lionesses) waged righteous war against fusion, fuelled by the essentialism of critics Albert Murray and Stanley Crouch. That was a war worth fighting: Marsalis and co were the radicals pushing back a wave of commodified beige. They later became the Neo-Cons of jazz when their descriptions hardened into hegemonic and exclusionary definitions and, in the words of AACM trombonist George Lewis: “When new black experimentalists presented an event deemed as falling outside the … framework of jazz, neither the jazz writers nor the new music writers would cover it.”

That’s a debate trumpeter Ambrose Akinmusire – who played at this year’s festival, unfortunately, given the acoustics, on the Molelekwa rather than the Rosies stage – doesn’t want to get into: “All those people, on all sides of that argument, are part of the reason why I am playing jazz today.” But for this young player with a distinctive, plaintive, spiritual voice: “Music represents its time – not only its past but its future.” Akinmusire quotes reedman Wayne Shorter: “‘A composition is never finished’ − it lives eternally, and once we die it’ll still be around.” 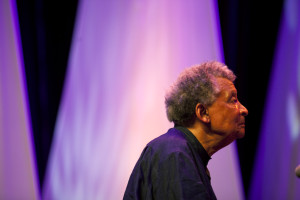 Around but changing − that was the message from both Phillip Tabane and pianist Randy Weston. The Malombo originator constantly reinvents his ancient sound and refuses to be pigeonholed, even when he is compared (as he once was) with Miles Davis: “I don’t play like Miles; he plays like me!”

Tabane comes close to embodying the spirit Weston aims to channel: “I’m not a star, I’m a messenger.” The pianist’s reference points are ancient Africa and the communal traditions handed down through African communities in the United States: “When I was growing up, the musicians were no different from the audience. The people would tell you if you’re playing or not.” Steering by those stars, his vision is fresh and contemporary: infectious grooves, arresting discords and what John Fordham dubbed “chord-chiming, drumlike, free-jazzy piano”.

That kind of African piano was paid homage in a set of vignettes bearing that title from pianist Bokani Dyer in the most innovative set of the festival: a keyboard duo between Dyer and Kyle Shepherd – a conversation never heard before that will never be the same even if it occurs again. Shepherd’s mouth-bow sounds, Dyer playing inside a prepared piano, echoes of Malay, Khoi and San music, a jagged exploration of string vibration and percussive pulses, deconstructed rags and hop-step dancing – and that was only one number of half a dozen, all of which were, as one of Shepherd’s titles put it, Flying without Leaving the Ground.

Even UCT-based reedman Mike Rossi, whose role as a teacher might suggest a certain conservatism, used the Rosies stage to give us fresh, warm, original music inspired by his exploration of his family’s Italian roots.

The Molelekwa stage had its share of revolutionary excitement too: Akinmusire, the noisy, dazzlingly eclectic and technically superb Grammy-winners Snarky Puppy – and more South Africans. Ological Studies, led by Sibusiso Dlamini on keyboard and Phumlani Mtiti on reeds, have gained an assured fluidity on their instruments since winning their 2010 Sama for Freedom, and although the second half of their set was dominated by groove-led crowd-pleasers, the first showed more of their distinctive composers’ vision. Bassist Shane Cooper’s quintet gave us the oscillation of strings and the sound of hands on a sonorous piece of tree, but ended with one for the headbangers: a bass quintet take on Led Zeppelin’s Black Dog that irresistibly evoked memories of the Gil Evans Orchestra playing Hendrix’s Voodoo Chile on the tuba.

The weekend ended on Rosies with a red-hot set from visiting reedman Kenny Garrett, centred on his own compositions: “With the standards, you have a reference point. Writing your own tunes, you don’t, so you have to reach deeper to seek the language of your own sound,” said Garrett. 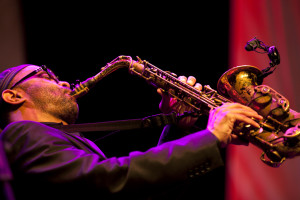 It’s hard to identify conservatism when you can’t tell novelty from innovation. Commercial pop music is by its nature conservative: it is manufactured and packaged to sell by offering consumers a known commodity with regularly changed trimmings to ensure repeat purcahses, just like the fashion industry to which it is conjoined.  On CTIJF’s pop music stages, audiences often wanted to hear reproductions of music they already owned – as in the case of Erykah Badu, who, as one reporter breathlessly gushed, was “belting out hit after hit”. (Although even for nostalgia-hungry Cape Town, Level 42 and Shakatak on the same stage on the same night may have been a Proustian moment too far.)

Cooper, Makuzeni, Dyer, Shepherd, Dlamini and more: all these new things got standing ovations from packed rooms. There’s a musical energy rising from this place again. Jazz – especially our home-grown variety – isn’t dead, and it smells as aldehydic as a classic perfume and as spicy-aromatic as freshly-roasted coffee. As for the commodities being manufactured on some other stages … that’s another story.

Main Picture: Dr Phillip Tabane, the progenitor of Malombo music constantly reinvents his ancient sound and refuses to be pigeonholed

Take Two: Bokani Dyer and Kyle Shepherd duo-ed on the keys in a conversation never heard before and which will never be the same even if it occurs again

Fore!: The world according to Kenny Garrett: “With the standards, you have a reference point. Writing your own tunes, you don’t, so you have to reach deeper to seek the language of your own sound.”