It has been a tough season for us Manchester United fans; we have become so used to success over the past 26 years of Sir Alex Ferguson’s magnificent reign.

Ferguson appeared at times to win as a result of the power of his own will: like the football managerial equivalent of Nietzsche’s übermensch, he forced history to move through his own terrifying internal drive to succeed, as United came back time and again in the dying minutes of matches when his team embarked on kamikaze raids to pull back deficits.

Last season, with a team including the likes of Ashley Young and Tom Cleverley (players as talented as slap chips), United strolled to a title on the power of Fergie’s will, Van Persie’s goals and Paul Scholes’ decaying guile. Fergie’s presence at Manchester United has been a comforting certainty my entire life, something I could count on. Losing him has been a bit like losing a father, a completely destabilising feeling that’s led to a questioning of all the things I took for granted.

But I digress. Now is the time of David Moyes, a man elevated from Everton to the helm of one of the world’s great football clubs − and so far it sucks.

Last season’s champions have quickly dissolved into a one-dimensional bunch of plucky underdogs who expect to lose to the big clubs – as well as to the likes of Newcastle and West Brom at the once insurmountable fortress of Old Trafford.

My problem is not that we are losing − I expected some difficulties in this transitional period and, like many other United fans, I knew our squad couldn’t compete for a title this year. My problem is strictly at the level of ideas: an ideological problem.

At the core of my current angst and disgruntlement is the philosophy of our new manager. Moyes has built his career on a reputation of being able to overachieve with an Everton side that compensated for their lack of finesse with sheer grit, and that could finish in the top half of table with a limited budget.

His team was known for getting a result in a blaze of glory ahead of losing, going with the long ball or the cross rather than committing to the spirit of Joga Bonito.

In this, Moyes has more in common with the likes of Tony Pulis or “Big Sam” Allardyce: English bullies (yes, I know Moyes is a Scot) who rely on rough play, dark arts and set pieces. These are managers who have a footballing philosophy that is, essentially, the sporting equivalent of the geist of the English Independence Party.

Hell, Big Sam might even be the football version of Nigel Farage − somebody who delusionally seems to be channeling the grand myth of the British empire, underdogs who conquered the world in the spirit of fair play and hot tea with a spot of genocide thrown in.

These coaches channel Winston Churchill’s defiant rhetoric of the Battle of Britain in the changing room.

They are dedicated to the core principles of the “British” game: long balls, 4-4-2, tough challenges (or, rather, coordinated acts of grievous bodily harm on the football pitch) and crosses: Eighty-one of them lumped in against Fulham in February this year causing their beanpole defender Dan Burn to observe that he had “never headed that many balls since the Conference [League]” when he was playing amateur football for Darlington.

These are the coaches who are raging against the impurities brought into the game by deviant and decadent foreigners (from diving to progressive technical play).

Perhaps in this rage, I’m being unfair to Moyes by lumping him together with a bunch of primitive pragmatists. But his record since coming to United speaks of our sorry record at Old Trafford this season, of his befuddling purchase of Marouane Fellaini for £27.5 million (R48 million) even though he was available a month earlier at £23 million.

He’s little more than a gigantic Afro constantly losing the ball and throwing elbows at anyone in sight; a player who runs around the pitch like a lost giraffe high on buttons. Moyes has deployed Fellaini as a long ball trequartista who uses his chest in a playmaking style closer to Andy Carroll than Xavi or Mesut Özil.

Moyes  has mostly stuck to his own ideological puritanism. He somehow saw something the world’s other 6-billion people appear to have missed in Young, convinced himself that Cleverley could be a decent midfielder and played record signing Juan Mata out on the wing.

This season United have looked like a reactionary team uncommitted to modern progressive football, more of a pub team playing on a rain-soaked winter’s day in a match that ends in a brawl rather than trophies.

What truly hurts is that they’ve become a team that would rather settle for a draw than go for the win. Moyes has displayed no evidence of having vision to drive the team forward − we have got worse rather than better. Until injuries forced him to play Shinji Kagawa and Mata together − leading to demolitions of a few table-propping stragglers as United played more like Barcelona than Stoke – he has lacked creative imagination.

The xenophobia that is becoming an increasing part of modern British identity is the only reason he still has a job.

If he was foreign he would have been sacked months ago, like André Villas-Boas at Tottenham Hotspur. But, because he is British and the footballing press desperately wants to cling to the myth of a plucky underdog managing the corporate behemoth of MUFC in 2014, he has the benefit of the media’s doubt.

Robbie Savage, usually not one to mince his words, admitted as much in a recent column where he said he overlooked Moyes’ deficiencies because he liked the man −the straight-talking, honest, dour Scot who makes his players run endless laps in the pre-season rather than utilising modern training methods.

The United Kingdom is a country whose political consensus has become permanent austerity. A bunch of dull Oxbridge types − like that smarmy bastard David Cameron and the most awkward man in the universe Ed Miliband − form the political class whose subservience to the City of London knows no bounds as much of the country is turning to reactionary xenophobia, blaming foreigners for all the UK’s woes. It is with this in mind that the continuing presence of Moyes at Manchester United makes sense. The modern UK is a decaying country clinging to a deluded nostalgia, a country that might exist next to an independent Scotland in the near future.

Now, as we prepare to face the mighty Bayern Munich in the second leg of the Champions League quarterfinal, I hope we can get a result.

I pray I am wrong about Moyes and our team can progress to a glorious future with Kagawa, Mata and Adnan Januzaj forming a sublime trio to elevate our play under the misunderstood Moyes.

Yet, the future looks bleaker than a winter morning in Manchester: Against Bayern Munich in the Champions League quarterfinals on April 10, Moyes spent 60 minutes playing with 11 defenders, despite setting out an attacking field and starting with Kagawa. When United scored a lucky goal, Bayern, who were sub-par, responded with the sort of clinical football that visibly demonstrated the gulf of pedigree between Pep Guardiola and Manky Moyes.

Moyes is likely to stay on regardless. This is the reason I despair.

Main Pic: A Banner that Liverpool fans made to taunt Manchster United fans during their clash at Old Trafford in March.

Gallery: Some forms of social media protest against David Moyes by Manchester United fans [Click on an image to view as a gallery] 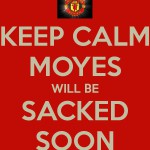 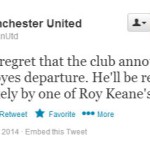 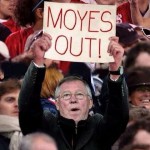 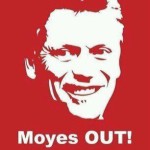 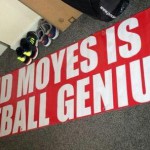 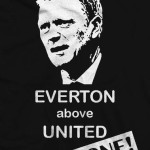 Benjamin Fogel is a PHD candidate in Latin American History at New York University and he is the former managing editor of Amandla magazine and is part of the Africa is a Country editorial collective . He seems to fill his spare time with Cam'ron, Manchester United and Fredric Jameson. He also really hates libertarians, really really hates them. View all posts by Benjamin Fogel →