Jazz traditions face a fresh onslaught as a generation reared on MF Doom, J Dilla, Radiohead, Joy Division, A Tribe Called Quest and the Wu-Tang Clan are taking to studios and stages to recreate jazz in their own image. From Chris Dave and the Drumhedz, who funked up the Moses Molelekwa stage at the Cape Town Jazz Festival a few weeks ago, to the enigmatic talent that is Kris Bowers, one minute recording with serious jazz cats Christian Scott and Walter Smith III, and the next with hip-hop’s current icons Jay Z and Kanye West, changes in the genre are afoot.

At the forefront of this onslaught on traditional jazz is the Canadian trio BADBADNOTGOOD − and they are about as young as jazz musos come. When they released their second album, BBNG2, in 2012, they boasted that no one older than 21 was involved in its recording. For those who need a refresher, BADBADNOTGOOD are Matthew Tavares (electric piano), Chester Hansen (bass) and Alexander Sowinski (drums, or the guy in the pig mask), and they rose to fame through collaborations with Tyler, The Creator and Frank Ocean from Odd Future. The band loaded a video on to YouTube of them playing some Odd Future tracks, which was titled The Odd Future Sessions Part 1. 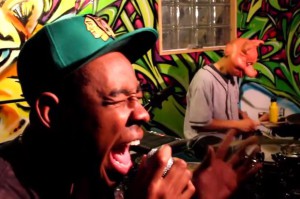 When Tyler, The Creator picked up on it, it went viral and the band soon launched their debut album in June 2011. The album, titled BBNG, featured jazz covers of songs by A Tribe Called Quest, Ol’ Dirty Bastard, Nas, Gang Starr, Flying Lotus, Joy Division and Odd Future. It was hailed as “a welcome reinterpretation of modern jazz”, freeing the genre from the “thick-rimmed hipster dinosaurs”. BBNG2 went even further, featuring covers of Feist, Kanye West, Earl Sweatshirt, James Blake and My Bloody Valentine.

Now their third album, aptly titled III, is upon us. So what can you expect? On the opening composition, Hansen on bass leads the trio into a banging hip-hop groove − think DJ Shadow. This opening track, titled Triangle, is übersmooth, touching on places Radiohead have gone to in the past decade, but with enough street swag to keep it all about the here and now. It’s a big statement from a band very much in synch with their sound and with one another.

And the album does not let up. Can’t Leave the Night was the first single off the album, and again it is reminiscent of DJ Shadow in parts, but also brings to mind some of the Beastie Boys’ instrumental jamming. Drummer Sowinski is particularly impressive on this track, driving it onwards as Tavares and Hansen embellish on top of his steady rhythm.

There are big, bold pieces like Confessions and Kaleidoscope. The first featuring the Toronto-based Leland Whitty on saxophone; the latter is a fusion piece that takes a tour through hip-hop, euphoric pop, acoustic drum’n’bass, post-punk and bebop in seven minutes. Three minutes into Confessions, when Tavares starts vamping on the electric piano, the piece really steps up a gear. Whitty’s horn is so smooth, so enveloping, it wraps this combative piece of jazz in a warm, loving glow, softening the trio’s intricate blast.

CS60 is a cold, mutant piece of twisted ambient techno; it’s frigid, yet so inviting. After about two minutes the song takes a dubstep to the left, beginning to sound like a Burnt Friedman creation, before taking on a marching band strut and then ultimately unwinding in various dizzying spells of rhythm. Eyes Closed feels like it could be an instrumental on Björk’s Vespertine for two minutes, until it takes on an upright bass-led groove that brings to mind Radiohead’s experimentation with the concepts and ideas of legendary bebop bassist Charles Mingus on Kid A. The similarities are intensified when the band lock into a section that can only be described as a prog-rock scorcher, before slowing it down to fade out.

BADBADNOTGOOD have a serious intensity about them. They are slaves to forging new sound, but this visionary drive is also controlled, restrained in an odd way; in pulling back for a split second, the end result is that much more beautiful. It’s almost like a subdued intensity, in a way reminiscent of the spell Portishead could spin over you in those heady days in the 1990s, although the two bands’ sounds are hardly similar. What is clear is that BADBADNOTGOOD are a major talent and that III is a real new signpost for where jazz is heading for the younger generation. Thick-rimmed hipster dinosaurs beware − we are coming for your precious jazz.

Pic Credits: Tyler, the Creator from Odd Future recorded a live jam session with BADBADNOTGOOD, in drummer Sowinski’s basement in October 2011. Videos from the session received more than a million views between them on YouTube.