The good news is it’s banging and packed with guest performances, but what else would you expect from the man The Roots’ ?uestlove called “probably the most dangerous drummer alive”. Chris Dave has filled the drummers stool for many big names including MF Doom, Beyoncé, Adele, D’Angelo, Erykah Badu, Robert Glasper, Mos Def, Terrence Blanchard, Kenny Garrett and Thundercat, among others. But now he is charting his own course. 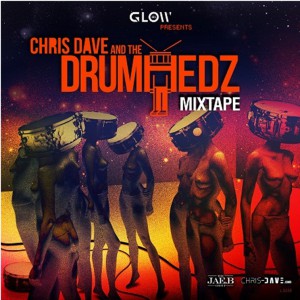 Gorgeous R&B grooves, Afrobeat-tinged funk rhythms and straight-up hip-hop effortlessly cohere into an hour-long mix that owes a lot to the work of King Tubby, Prince, J Dilla and Tony Allen. The J Dilla influence is mostly evident on Handz on ur Drum and Drumz & Sexxxxx, while another reference point is hip-hop collective Sa-Ra Creative Partners, with both Walk On and The Sex sounding as though they could have been recorded during their Nuclear Evolution: The Age of Love sessions. Walk On features the vocal talents of Aaron Camper and owes a lot to Prince and Frank Ocean, while The Sex features Wayne “Pz” Perry & Stutz McGee. There is a direct link between Sa-Ra and Dave, as Dave went to school with the former wife of Sa-Ra’s Shafiq Husayn. In 2012 they recorded together on the track Lift Off / Mic Check on Glasper’s Black Radio, and again on May I Assume off of Husayn’s The Loop album, a gorgeous R&B groove.

But getting back to Mixtape, Didn’t Exist is a perfect example of the Allen influence, where a smooth dub track meets Fela Kuti’s Lagos. It’s a stripped funk groove that is reminiscent of Rocket Juice & the Moon, the band Allen played in with Damon Albarn and Flea a few years ago. Slim & Juicy brings together a great hip-hop beat with the wondrous voice of Sy Smith, who steals the show with luscious R&B vocals. It’s hard to follow that, but Dave does, with Live in H Town featuring Yassin Bey, aka Mos Def. It exists for all of two minutes; a live improv session that you wished went on for much longer.

These sonic explorers lay down groove after groove and have you spinning head over heels waiting for the next one. But it’s all over before you can blink, with most tracks clocking in at an average of about two minutes. The final track, Africa…! Freak Her, ends things perfectly. It’s a reminder that jazz is heading to bold new places, and part of that journey is going to include drawing on the strong body of music produced on the African continent.