In the build-up to the 2011 elections in Russia, the opposition rallied around a powerful slogan coined by public corruption fighter and opposition politician Alexei Navalny. The phrase rebranded United Russia, the political party of President Vladimir Putin, from “the party of real deeds” to “the party of crooks and thieves”. As Ben Judah points out in his book Fragile Empire: How Russia Fell In and Out of Love with Vladimir Putin, “sometimes a phrase can be more powerful than an organisation”.

“There is an element of genius in this catchphrase,” claims Judah. “It is both funny and furious.” “It was an instant way of expressing Russia’s frustration with the rent-seeking, oligarchic, oppressive system without having to use those same clumsy words.” The catchphrase went viral, and, Judah reports, on the eve of the 2011 election, “over 10 times more people knew the slogan – ‘the party of crooks and thieves’ – than knew who Navalny was”.

Fast-forward three years to 2014 and South Africa is heading towards its own national election, with President Jacob Zuma likely to retain his throne. This is despite a court ruling that citizens and opposition political parties are allowed to publically call him a “thief”. It is the public-funded upgrades to his Nkandla homestead and the fact that Public Protector Thuli Madonsela found that Zuma had “unduly benefited” from these upgrades that was at the heart of the court ruling.

Naturally, South African opposition parties are attempting to use Nkandla to their benefit with the elections just two weeks away. The Democratic Alliance appears to want to march on the homestead at the drop of a hat, and one-time Zuma praise singer Julius Malema, who now finds himself in opposition as the leader of the Economic Freedom Fighters, has called it a “museum of corruption”.

Add to this the tragic scandal of 2012’s Marikana massacre and Zuma is looking like a president increasingly in the hot seat. The situation has become so out of control that we now have the South African Broadcasting Corporation doing the ANC’s bidding by censoring political party advertisements under the pretext that they “incite violence”. Am I missing something here or is the SABC really arguing that when the ANC government uses state violence against its citizens the opposition is at fault for pointing it out?

The way the ANC has handled both Nkandla and Marikana has left many South Africans disenchanted. Cover-ups and a lack of accountability are the order of the day. This is clear when one looks at how the words “fire pool” have entered the South African lexicon as a symbol of just how much disdain the ANC has for South African voters. Well, that and South African Communist Party head Blade Nzimande’s ridiculous utterance that the Nkandla scandal is just “white people’s lies”. Let’s not forget that this is the same man who suggested making it illegal to criticise the president. 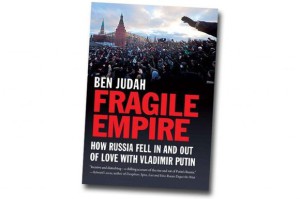 As South Africa heads towards election day on May 7, Judah’s book on Russia and Putin is a pertinent reference point for its citizens. The similarities between South Africa and Russia are startling and the political careers of Zuma and Putin are both incredibly revealing. The South African economy, much like the Russian economy, is one built on the back of abundant natural resources. In Fragile Empire, Judah quotes Simon Kordonsky, a former consultant and speechwriter of Putin’s, who describes the nexus between the Russian economy and political system.

Kordonsky says, “the state feeds itself off natural resources, which are then distributed, either as subsidies or as the rights to control rents by the Kremlin”. “The power of the state is the power to direct these flows – politics is competition to divert these flows,” says Kordonsky. “So what looks like corruption, in the sense of it being a defect in the system, is the nature of the system itself.” Or, as Judah argues: “It was frequently repeated that there was not pervasive corruption infecting the system, but rather that the system was corruption itself.”

Just take a minute to think about all the ANC-connected businesspeople who have been making millions by exploiting South Africa’s natural resources. “The vertical of power turned into a vertical of corruption,” argues Judah. “United Russia turned into a patronage network, not a party, and the ‘dictatorship of law’ turned out to be a ‘dictatorship of predatory officials’.” Are these not the same types of people Cosatu General Secretary Zwelinzima Vavi called “hyenas” a few years ago? “The Kremlin is a court more than an administration,” argues Judah. “Like any court, it is a venal and unideological place where personal ties and patronage, factions and feuding, are the arithmetic of power.”

Under this political system in Russia, the middle class boomed and became disconnected from real politics in the country – much like South Africa, one could argue. “In the Moscow suburb of Zunino, one housewife once bluntly told me, ‘I lost interest in politics when I stopped shopping at the market and started shopping at the hypermarket’,” writes Judah. “She spoke for millions.” South Africa’s rampant consumer culture and worrying levels of consumer debt suggest a similar trajectory in South Africa. The middle class is more concerned with the latest cars, watches, phones and sneakers to hold any ambitions as honorable as holding their elected government accountable.

Describing the middle class that boomed under Putin’s rule, Judah writes: “They read the Russian version of Elle, bought their furniture from Ikea, wanted iPhones and went on holiday in Turkey.” Judah argues that this middle class rose to represent around 20% to 30% of the Russian population. Importantly, he argues that this rising tide of inequality between the middle class and the working class did not create resentment – until the 2008 global financial crisis. There’s nothing like hard times to drive ill-feeling against a corrupt government.

Judah argues that a generational change in politics should have resulted from the middle class’ rise in economic power. But he says that in Russia the middle class was too weak to institute this change and the old forces – the individuals, the church, the military-industrial complex, still maintained the balance of power. “The fathers don’t want to let go while the sons are too cowardly and not strong enough to make it happen,” argues Judah. In the South African context, we only have to look back to Malema again and his call for a “generational change” in the leadership of the ANC. Obviously this was when he was still within the ANC as the head of its youth league.

The result of all of this in Russia was a rising tide of “repressed agitation”, according to Judah. To quote Navalny: “Everybody thought if we were smart we would soon become rich, but then it suddenly became apparent that the rich are those who are somehow connected to the government.” As citizens grew frustrated with this system of patronage and the growing inequality evident in Russian society, Putin’s views that United Russia was just misunderstood sound awfully similar to those expressed by ANC leaders in the past few years.

“Our society must understand that a minority – a certain category of people – must be paid very well by the state so they can secure the standards of living for the majority,” Judah quotes Putin  as saying. “When will we finally understand this? Our people aren’t stupid. It just hasn’t been explained in the right way.”

Think back to the ANC centenary celebrations in Mangaung in August 2012 and to that incident when Deputy President Kgalema Motlanthe proposed a toast to a half-empty stadium. On that day, Motlanthe told the crowd that if they did not have champagne, they could take photographs of their leaders drinking, or raise clenched fists. “The leaders will now enjoy the champagne, and of course they do so on your behalf through their lips,” he said. The elite enjoying the spoils on behalf of the working class – the image is one that smacks of unchecked arrogance.

Which brings us back to Putin and Zuma. The picture Judah paints of Putin is very similar to the Zuma we have all come to know so well during his first term.

A man who appears accountable to nobody. A man who does not tolerate criticism easily. A man who looks increasingly ethically compromised. A man whose state is increasingly personified by brutal policemen who are not held accountable. A man who heads a party that can no longer “conjure up an imagined future” so they fall back on “invoking half-imagined horrors from the past”.

Just like Zuma, Putin has had public scuffles with artists who chose to take him on – Zuma had Zapiro and The Spear; Putin had Pussy Riot. Just like Zuma, Putin was publically booed – Zuma at Nelson Mandela’s memorial service in December 2013; Putin at a martial arts event in November 2011.

Detailing the incident in 2011, Judah writes, “they say that all outbreaks of unrest take place against a backdrop of exhaustion, and are an unleashing of repressed agitation”. “It always begins with one event, one unpredictable twist that takes even those who wished for it by surprise,” he writes. “At the end of November 2011 it happened. They booed Putin. The martial arts fans had achieved something that opposition politicians had long failed to do: to make Putin look weak.”

Judah writes at the end of Fragile Empire: “Russia is still a cautious country that does not want a revolution and is terrified of anarchy. Yet the mood, the op-eds, the way people think is jittery and hysterical.” Never have I read a more apt description of South Africa, yet it wasn’t written about South Africa. Judah argues that that Putin can never step down for fear of arrest because of the scale of corruption. “He will inevitably need a protector, either in 2018 or 2024,” he writes.

In contemporary South Africa, the conversation by political analysts and the media similarly revolves around how Zuma needs someone or something (like a constitutional amendment or change of law) to protect him from being arrested. Judah muses that maybe if “mass unrest and civil disobedience spiral out of control” in years to come, then the party of crooks and thieves may sacrifice Putin. One wonders what it would take for the ANC to do the same to Zuma.