Last week Khanyi Mbau confided in The Con that her vagina “told” her that it “felt shiny because everybody took a lick at it [during the Comedy Central Roast of Kenny Kunene recently] … but my pussy said she was quite used to it after all these years of being with me”.

While there were no details on the refinement of Mbau’s previous lickings, the 27-year-old schlebrity Venus flytrap turned actress’ “pussy” certainly got roasted more than Kunene a few weeks back at Johannesburg’s Lyric Theatre when the show, which debuts on Comedy Central today, was being shot.

Hell, Mbau’s vagina was roasted so often one half expected it to be presented with gravy, Yorkshire pudding and two sides of vegetables at some point during the evening. 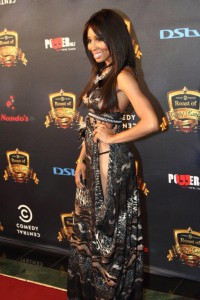 Despite Kunene being the intended subject of a skewering, it was Mbau and her alleged promiscuity (and her “pussy”) that became the focus of much of the comedians’ humorous assaults – many too easily clichéd.

“If you’re here, then who is on Oxford Road?” asked one of the comedians in reference to the street in Johannesburg’s Rosebank suburb where the proliferation of hookers and kerb-crawlers is only outnumbered by the sexually transmitted diseases flying around.

“You’ve been engaging in ancestral fucks!” noted Kunene himself, riffing off Mbau’s penchant for much older, much richer men.

Tumi Morake, meanwhile, observed that Mbau had “bankrupted more businessmen than the recession”, which was pretty clever.

Yet the woman often portrayed as a dumb, gold-digging bimbo emerged with grace and humour. At times she was self-deprecating to the point of hilarity, noting that she was one of the few people talented enough to “suck a cock so hard that a Lamborghini comes out”.

In an interview with The Con, Mbau comes across not so much as a cynical airhead but a hard-nosed realist with a fair smattering of intelligence.

She self-promotes, certainly, but she is canny rather than manipulative and very aware of her symbolism in a post-apartheid South Africa where consumerist materialism has replaced the country’s more political impulses from the struggle against apartheid. 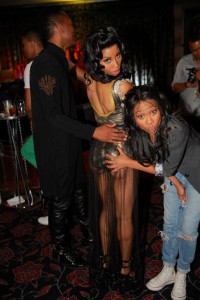 Mbau, who says she is currently rereading Khalil Gibran’s The Prophet, is unashamed about the “lavish clothes and flashy cars lifestyle” that she represents, but if you hear her tell it, this materialism is a salve for the trauma and impoverishment inflicted by apartheid.

In its aspiration, the lifestyle responds to everything apartheid did not want black people to have or to be. She imagines herself as a bridge between a history that has been rapacious in its effect on black people and their psyche, and a future where anything – especially Manolo Blahnik and canary-yellow sports cars – is possible if that is your dream.

An examination of her psyche would certainly be revealing for an academic study of the psychology of apartheid.

Which is why the Roast was slightly disappointing in this regard – instead of teasing out the nuance and texture of the people and the phenomena, it sometimes fell into lazy cliché.

But these will, hopefully, be edited down (along with Jack Parow’s mumbling, painful attempts at punch lines) for television audiences.

There were lots of giggles and guffaws elicited by the crew of roasters that included singer-biltong PJ Powers (who apparently has finally come out the closet after 362 years), John Vlismas and Somizi Mhlongo (the self-confessed “first openly gay African man on the continent”). 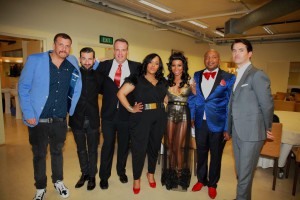 While Kunene’s roasting “was outshone by my pussy”, according to Mbau, he did get his fair share of ribbing for everything from the Ponzi-scheming fraud that got him banged up in prison to his political aspirations as leader of the Patriotic Alliance, his sushi-laden palate and shagging habits – “You’re an STD Petri dish,” Morake quipped.

There were also moments when broader national issues were tackled. President Jacob Zuma, who seems to be perpetually surfing a wave of alleged corruption and ethical bankruptcy, was described as perfect prisoner material as he was an artful combination of the 26 and 28 prison gangs: “He’ll rob you like a 26 and fuck you like a 28,” one of the comedians observed, riffing off the Nkandla scandal and Zuma’s Lothario image.

Kunene’s Roast was uneven: hilarious at times, unfunny at others – especially when roasters resorted to lazy stereotypes. But editing down a live show for television should certainly make it snappier and sharper overall – especially if they airbrush out Parow like a certain sad former Manchester United manager.

But one of the clearest truths from the Roast was Mbau’s barb to Kunene: “You’re like this Roast: a bad copy of something we saw on television.”

Photo Credits: Kenny Kunene, Khanyi Mbau and the roasters and  at the Lyric Theatre: Courtesy of Comedy Central