Novelist Thando Mgqolozana (30) is often quoted in his interviews as saying that his favourite book of all time is Joseph Diescho’s Troubled Waters, a story set in Namibia in 1974 when the country was under the control of apartheid South Africa. The temptation is, of course, to search for traces of Diescho in Mgqolozana’s writing, but there are no obvious signs of any such influence.

In his latest novel, Unimportance, Mgqolozana takes on a nascent subject in South African novels: university life. The book does not, except through the protagonist’s brief memories, involve scenes from the world outside it. Unimportance is different to Mgqolozana’s previous two novels, because it reveals the author’s intention with the novel’s form. Mgqolozana is imagining a world in which his character enjoys his being without question; his protagonist’s centrality is all there is. 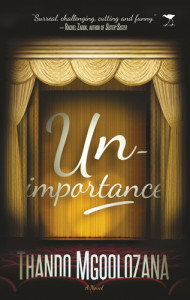 Unimportance is set at the University of the Western Cape. Zizi, an SRC representative and the authorial voice of the novel, is going through a desperate 12 hours on the evening before his presidential manifesto speech. He has had a fallout with his girlfriend, mainly about her going missing when he needs her the most − she tells him she is coming back but does not return. Zizi feels he must find her if his reputation on campus is to remain intact.

The story moves on through a multitude of thoughts – with weak streams of consciousness – about his life, and we find out about his obnoxious relationship with his girlfriend and his suspect treatment of her; and, very cleverly, we learn about his relations with other women in his life, one of whom is Amaze, his deputy. He says of her, “Amaze is one of those people in my life whom I love to love. I’d like her to be in my life some more, outside politics, in some other yet-to-be determined capacity.”

Zizi’s sexist frame of thinking is unredeemable, depicting women merely as something to be used. This is not the only unresolved issue that Mgqolozana brings up about his character – he is quixotic, after all, confessing to a good friend (a woman) that he plans to go home instead of staying around and remaining, as the title states, unimportant. The author’s interrogation of timeless matters gives his narrative a sense of strength and belonging.

Unlike his South African contemporaries − the likes of which include Lauren Beukes − Mgqolozana does not look over his shoulder to European readers, but seems to be focused on the South African reader. His preoccupations with detail in the book − from students’ experiences with laptop ownership to lies told in the name of culture − uncover many myths about South Africans in a frank yet humorous tone. Compared with his first and often didactic novel, A Man Who Is Not a Man, about a botched circumcision ritual, this book does not lose steam and is entertaining throughout; Mgqolozana clearly had fun writing it.

The author is championing a new fabric of writing that is emerging from the post-apartheid literary scene. Unimportance is profuse with talent, with that golden touch where nothing Mgqolozana writes seems pedestrian. The sentences are beautiful and organic, and one can almost feel the things he is describing. The novel has none of the unnecessary and desperate controversies that Mgqolozana used with his first two books.

Unimportance promises much, and it delivers. It may well be his best book yet.