The Trans-African Highway, a road network linking Africa’s major cities, is far from complete, 43 years on 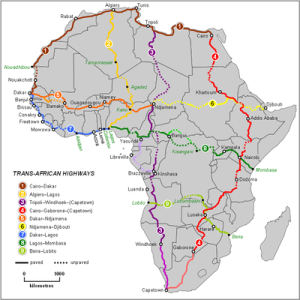 Driving from Cape Town to Cairo has long held a romantic allure for many adventurers. What about travelling from Dakar on Senegal’s Atlantic Ocean coast to Djibouti on the Gulf of Aden, or from Mombasa, Kenya to Lagos, Nigeria?

The United Nations Economic Commission for Africa (UNECA) conceived this dream more than 40 years ago and named it the Trans-African Highway (TAH). UNECA first proposed this roads network in 1971, when most of the continent’s countries were emerging from colonial rule. They were looking for ways to boost regional trade and integrate their economies. But nearly half a century later those aims remain unfulfilled and progress on this roads system is agonisingly slow.

The plan was always ambitious. UNECA envisioned nine roads linking cities as far apart as Tripoli on the Mediterranean, Windhoek in Namibia and Cape Town in South Africa. Together those networks would measure almost 60,000km, more than enough to span the earth’s circumference.

“It was designed in such a way that it constituted the backbone of the continent and all the countries would be linked by these highways,” explains Marie Therese Guiebo, economic affairs officer in UNECA’s regional integration, infrastructure and trade division. “You would take one from Algiers to Cape Town, one from Dakar to Djibouti. They wanted to make it the basis of regional integration in Africa.”

Building the road network has been worryingly slow: 21% of the TAH is still unconstructed, according to UNECA’s most recent assessment in 2011. In landlocked, underdeveloped central Africa only 3,891km of a planned 11,246km of roads have been paved, meaning that after more than four decades 65% remains unconstructed in that region.

The story is similar, though less extreme, in most other parts of Africa. Only one of the nine original roads, a 4,400km stretch across the Sahel, connecting Dakar, Senegal to Ndjamena, Chad, is completed. All eight of the other routes are missing significant links. Standards for construction are not harmonised, meaning that road quality varies widely. In some cases completed roads are degrading because they are not maintained.

The African Development Bank cites difficult terrain and climatic conditions as partially responsible for the crumbling Tripoli-Windhoek highway. It also blames inadequate funding for maintenance or upgrades. Civil conflicts in countries such as Angola and the Democratic Republic of Congo have damaged roads that now require reconstruction.

The New Partnership for Africa’s Development (NEPAD), an African Union economic development programme, is responsible for finishing the TAH network. Its broader Programme for Infrastructure Development in Africa (PIDA) has absorbed the project. As a result, NEPAD does not offer newer figures for the highway’s implementation. The rollout of planned roads has progressed at a snail’s pace.

The huge dearth of African infrastructure poses a major challenge to the continent’s development. As populations grow and investment increases, the pressure exerted on that infrastructure is increasing. African road networks carry hundreds of billions of dollars of goods every year, but tend to link cities to ports rather than connecting the continent’s many hinterlands. Road density varies widely: fewer than 40% of rural Africans live within two kilometres of an all-season road, the lowest level of rural accessibility in the developing world, according to the World Bank.

That puts a huge drag on trade between African countries, which is only about 12% of the continent’s total, compared with over 40% between North American nations, according to 2012 UNECA estimates. Worryingly—though unsurprisingly, given the infrastructural constraints—that figure is not increasing.

The state of the continent’s roads costs international investors, too. Transport prices are anywhere between 50% to 175% higher in Africa than global averages, consuming more than 20% of foreign export earnings, according to KPMG, a professional services firm.

Citadel Capital, a Cairo-based private-equity group, knows this first hand. Every time it transports a single container from the chronically congested Kenyan port of Mombasa to its agricultural project in South Sudan, it costs the company a dizzying $25,000. In general, while it takes 19 days to ship a container from Singapore to Kenya, it takes 20 more days to truck it along the single-lane roads between Mombasa and Nairobi, the World Bank says.

“All told, the lack of adequate infrastructure is estimated to cut productivity across the continent by as much as 40%,” says Klaus Findt, chief operating officer of KPMG Global Infrastructure-Africa.

A 2006 World Bank report blames “isolation from regional and international markets” for contributing “significantly to poverty in many sub-Saharan African countries”. Upgrading the continental network would yield an extra $250 billion in overland trade within 15 years, with substantial benefits for the rural poor, according to the report.

But bad road conditions not only impede economic growth. They kill. An estimated 24.1 persons per 100,000 die in sub-Saharan Africa in traffic accidents every year, according to a 2013 World Bank report, partially because motorways are substandard. Traffic deaths here are predicted to rise by 80% by 2020. The region has the world’s highest number of accident injuries despite having the fewest vehicles.

“We can expect the situation to deteriorate with economic growth meaning that the number of cars and trucks is going to increase very fast,” says Jean-Noel Guillossou, manager of the World Bank’s Africa Transport Policy Programme. “If measures are not taken you are going to have more accidents.”

So why is building the highway taking so long? A regional integration project of this scale requires harmonisation to precede it. Lack of coordination between neighbouring countries means some governments have prioritised developing TAH roads and others have not. “You can propose that roads are completed by a certain time, but you can’t force a country to complete because it is according to their own needs,” explains UNECA’s Ms Guiebo.

Many landlocked countries consider creating roads to ports more urgent than building a link to other inland cities. “For Rwanda it is better to have a good road to Dar es Salaam [Tanzania] port or to Mombasa than to have a road linking them to Burundi or the Democratic Republic of Congo,” Ms Guiebo says.

Other governments such as those in west and north Africa have shown similar reluctance to prioritise the TAH. “Places where there are big gaps are ones like Mali and Libya, Niger to Libya,” she adds. “It is a desert and the countries are not ready to put a lot of money to complete this part of the TAH when they have no good road to go to the ports. That is their priority—all we can do is advise them to put the TAH on their priority plan.”

The absence of an institution mandated specifically to oversee the network’s development is another part of the problem, making construction piecemeal and slowing it down. “We created an agency to implement these highways but it collapsed in the 1980s,” recalls John Tambi, NEPAD’s infrastructure specialist.

Although it falls under NEPAD, the TAH lacks individual agencies to implement and monitor each highway in the network.

One such unit governs the Algiers-Dakar road, which UNECA says is complete except for a 200km stretch of desert track in Niger. (This is the same road section on which almost 100 migrants died of thirst last year after their vehicles broke down as they tried to emigrate to Europe.) This trans-Sahara highway is the only branch of the network to have had a continuously operating bureau since 1964. Put in place by the Algerian government, it is an example for others to follow, Ms Guiebo says: “It is pushing for very important improvements. But if there is no special institution it is hard to follow up the process.”

The trans-Saharan highway is an example of how one country can “champion” road development for its region, NEPAD’s Mr Tambi says. “These challenges are regional and not owned by one state so you need a champion to put this forward, because politically some may not appreciate the significance of these networks,” he explains.

UNECA and the African Union Commission have drafted an intergovernmental agreement covering road safety, harmonisation of construction standards and other related issues, which was scheduled to be submitted to transport ministers in April this year. “If the agreement is accepted that means this will be the guideline for improving or rebuilding the remaining part of the highway, because for now it is not harmonised,” Ms Guiebo says.

Regional trade will only improve with an upgraded and expanded continental road network. Still, no one can dictate to poor countries how to spend budget dollars; and competing agendas are likely to hamper any rapid change on the TAH. Africa has waited 43 years for this road system. The delay has cost the continent dearly, but it will be a while longer before citizens get the roads they so pressingly need.

This article was first published in Africa in Fact, the journal of Good Governance Africa

Eleanor Whitehead is a reporter at the Financial Times, focusing on business, policy and development. She has travelled extensively and has a particular interest in sub-Saharan African consumer markets. Her work is also published in Business Day, Forbes and The Independent.

Second Pic: Map of Trans-African Highways based on data 2000 to 2003 by Rex Parry


About Africa in Fact