As South Africans went to the polls last week, Eritrean refugees and asylum seekers in Durban watched on, many of them praying for people in their home country, where people are reportedly dying in desert prison camps and makeshift jails made from shipping containers.

On May 6, the day before the elections, the United Nations Special Rapporteur on Eritrea, Sheila B Keetharuth, called on the Eritrean government to “put an immediate end to the widespread practices of arbitrary arrest, ill-treatment and persecution”.

The human rights expert expressed concern about the unknown number of Eritreans who continue to be held in that country’s secret detention centres. Thousands are believed to be in detention at unknown locations, without charge or trial.

While Eritrean officials accuse Keetharuth of “peddling falsehoods”, the stories emerging from Eritreans asylum seekers in South Africa paint a grim picture of extreme persecution in their homeland.

The welfare and whereabouts of many people are unknown. Among them are journalists arrested 12 years ago during a crackdown on the media that started on September 18 2001 and has not relented since.

Speaking to Roving Reporters, a Durban-based journalism collective, about the plight of the arrested journalists, Tesfagabir Berhe Tesfu, a former Eritrean now living in Durban, said: “You don’t appreciate the freedom you have here in South Africa. In Eritrea there is no freedom of the press, religion, association or even movement. There is good reason Human Rights Watch describes the whole country as a prison. People are taking risky routes to escape – every day.”

Tesfu told how liberation fighter turned dictator President Isaias Afewerki had become an absolute tyrant in the past decade, crushing all opposition and introducing an enforced, slavery-like system of indefinite national service.
There have been no elections in Eritrea since it gained independence in 1991; as a single-party state, only the People’s Front for Democracy and Justice can effectively hold power.

Tesfu talked about “the G15” – a group of 15 former members of the Eritrea’s National Assembly who in May 2001 criticised Afewerki in an open letter calling for reform. They were jailed. Eleven remain imprisoned, their welfare and fate unknown.

“But the world remains quiet, as is the case with those 10 journalists,” said Tesfu. “They have never been in court. They are held incommunicado. No one has ever been allowed to visit them.”

The international Committee to Protect Journalists reported that the fate of the other journalists, and least a dozen others arrested since 2001, remains “a virtual state secret – pierced only occasionally by shreds of often unverifiable, second-hand information”.

As part of a global online campaign for press freedom, the World Association of Newspapers and News Publishers recently sent a petition to Afewerki, calling for the release of all detained journalists in Eritrea (at the last count 22).

The petition reads: “Your Excellency, we are appalled that so many of your countryʼs brightest individuals, whose passion to see a successful, democratic and open Eritrea has been twisted by your administration to mean treason and terrorism, and have ʻdisappearedʼ into the countryʼs notorious prison system. We urge you, in the name of human decency, to provide reliable information on the health and whereabouts of each of them so that their longsuffering families may at last receive accurate information.”

Roving Reporters delivered the petition to the Eritrean embassy in Pretoria on Friday, inviting comment from the Eritrean authorities and the president’s office.

While Eritrea’s ambassador, SO Abdu, refused to accept the petition or comment on it, in the streets of Durban, Eritrean refugees talked about why they had fled Eritrea.

Their stories, extracts of which are published on Roving Reporters’ Facebook page, lend credence to recent reports from Keetharuth about “an alarming situation on the ground” in Eritrea, including “extrajudicial killings, enforced disappearance and incommunicado detention, arbitrary arrests, torture, inhumane prison conditions, indefinite national service, and lack of freedom of expression and opinion, assembly, association, religious belief and movement”.

This week Keetharuth reiterated her call for the international community to strengthen efforts to protect people fleeing from Eritrea in line with human rights law.

In fleeing Eritrea, people have resorted to extreme measures. Thomas Selun who is now seeking asylum in South Africa, is one of those people.

“I saw people die, people who had no money or food,” said Selun, whose traumatic journey to South Africa saw him crossing a flooded river in Sudan on a plastic boat made of six 20-litre plastic drums. “There were 28 of us. The plastic boat could only carry nine at a time – six lying on top of the containers, others in the water holding on to the handles, and two at the front pulling and swimming,” said Selun.

He said he had been unable to survive in Eritrean national service, working as an elementary school teacher on a salary equivalent to R80 a month.

“You have a choice who you want in power – we don’t,” said Nega. “Back home things are falling apart. Even when I speak to my family on the phone, they can’t even talk about the current political situation. They are afraid of even uttering such things.”

At Habesha – a new Eritrean restaurant in Durban – Kebi (not his real name) said all he could do was pray that his family was safe.  Amid the UN’s calls for the Eritrean government to end practices of arbitrary arrest, ill-treatment and persecution, a group of Eritrean leaders in South Africa – and from abroad – gathered in Pretoria last weekend to discuss means of bringing peace and democracy to their homeland on the Horn of Africa.

“What’s happened in South Africa and the problems you have overcome gives us hope” said conference organiser Tesfalem Araia. “South Africa’s democracy is an inspiration.” 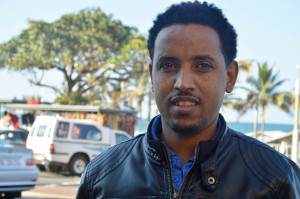 Eritrean teacher, Thomas Selun: “When I refused to go to the military camp, they took my father and arrested him for two weeks. To get him back home I had to sacrifice my freedom. I went to the military camp so that he would be released, but I had a plan to escape.” 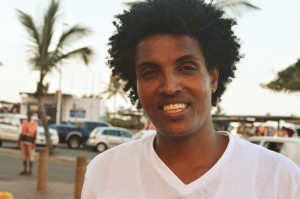 Solomon Gebrekristos: “Fleeing Eritrea to arrive in South Africa was like leaving hell to live in heaven. Eritrea is like an open prison, whether you’re inside or outside jail.” Solomon spent three months in a Kenyan prison after he was caught with illegal papers. He was granted asylum in South Africa. 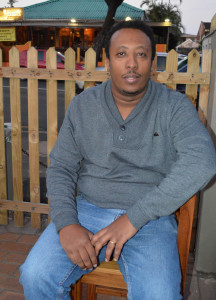 Meron Okbandrias: “I cannot go back home to Eritrea as long as the current government is still in power. It’s a hard reality to accept. My mother and father passed away and I couldn’t even attend their funerals.” 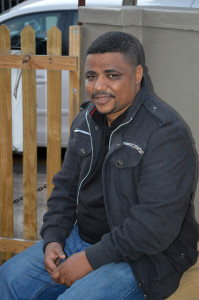 Tesfagabir Berhe Tesfu: “When there is democracy in a certain country, not only the citizens but even the noncitizens like us Eritreans get a platform to express our thoughts freely.”

Photo Credits: All Photos by Nomfundo Xolo and Fred Kockott Pictures and following information courtesy of Reporters without Borders.

Said Abdulkader
Aged 34 at the time of his arrest on September 20 2001
Founder and editor, Admas
Former journalist with public-owned Haddas Eritrea
Owner of a family printing press
Place of detention: Cell 24, Eiraeiro camp 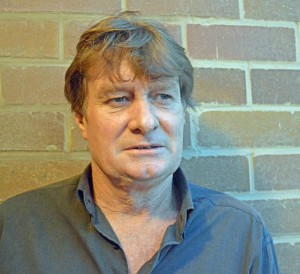 Fred Kockott has been described by a colleague “as a breed of journalist now so rare in South Africa, they should be listed by CITES”. With more than 25 years’ experience in journalism, Fred has received several notable commendations and awards for his work, including runner-up for the first Taco Kuiper Trust Award for Investigative Journalism in 2006. Since 2011 Fred has been directing Roving Reporters, a Durban-based investigative journalism training agency. Prior to becoming a journalist, Fred studied to become an art teacher, and in 2010 spent three months painting a 25 metre-long mural  outside Durban’s Cool Runnings telling the story of the FIFA 2010 World Cup.  He is currently collaborating with internationally renowned sculptor, Andries Botha, in developing the Makotikoti Art Project – an unbelievable outcome for what began as a Taco Kuiper grant for a group of students in Durban. 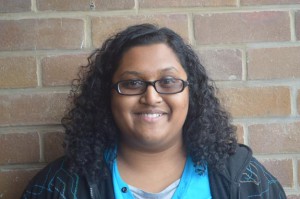 Deshnee Naidoo is passionate about the environment, gender equality, education and literature. She spent many school holidays with her nose buried in large textbooks on various ancient cultures or religions and reckons that in her past life she was either a librarian or an archaeologist. She loathes clowns, coriander and public speaking. 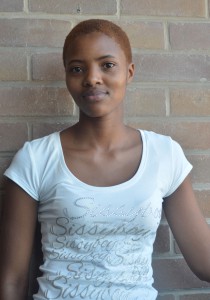 Nomfundo Xolo, 21, is one of the most enterprising and dynamic students to have graduated from the Durban University Technology this year. She is currently furthering her training with Roving Reporters, also working on a documentary Confessions of a Turtle Butcher. She describes herself as a journalist out to explore, inspire, break new ground and have fun.

Roving Reporters was founded by award-winning journalist, Fred Kockott, in 2010. Our mission is to impart skills and instill principles of good, honest journalism practice among students we work with. We provide opportunities to deserving students to take part in-depth assignments and investigations under expert supervision and guidance. We focus on critical environmental, social and justice issues. Our training programme is supported by the Taco Kuiper Trust in association with Wits Journalism, the Durban University of Technology and the Open Society Foundation for South Africa. View all posts by Roving Reporters →