In the early hours of Tuesday morning this week, police raided a bungalow built on contested land in Hangberg, the fishing community located above Hout Bay harbour. The owner, a 21-year-old man named Virgil Adams, was arrested and taken to Stellenbosch, or perhaps Bellville, where he is awaiting trial later this week. It is not yet clear why he was taken.

“It was a little after half past one in the morning,” his girlfriend, Naomi Williams, explained on Tuesday afternoon. “I woke up with eight men standing around our bed. I thought they were coming to kill us.”

Our interview took place in the front room of a small ground-floor apartment belonging to Adams’ mother. Williams, who is four months’ pregnant, sat on a plastic children’s chair. The room was furnished with a bed, a double bunk, a cupboard, a bookshelf and a television set. There was very little space to move.

“The police kicked down the front door,” she continued. “They claimed they had a warrant but they never showed me anything. Now the door is broken. I had to leave a friend to guard the house today.”

The bungalow, a simple two-roomed wooden structure on the upper fringe of the mountainside settlement, is among a growing number considered illegal by the City of Cape Town: constructed without permission on land officially designated as a firebreak, in direct contravention of local laws. 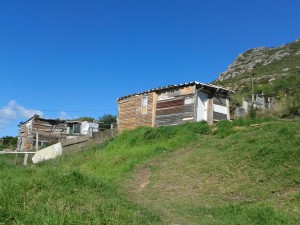 But the people who build their homes there claim that they have no choice, as there is nowhere else for them to live.

“I want my own space. I want to start my own family.”

Her hands came to rest on her swollen stomach and then she was still.

“My wife woke me in the middle of the night. She told me that she could hear screaming,” said Paul*, a neighbour. He was sitting on a broken bucket outside another man’s front door. Virgil Adams’ empty bungalow was 20m away.

“Usually when people shout up here it’s because there’s a fire, so I ran to the back gate and looked around. There was no fire but I could see torches. A man was shouting ‘Boere! Boere!’ and I could see the police moering [beating] him, so I started shouting too. Then everyone was awake and we started throwing stones.”

The two young men he was sitting with became animated.

“They were afraid of us!”

“I won’t lie to you,” said Paul, interrupting them. “Our children were traumatised. The police were pointing guns in that lady’s face and shining their torches so she wouldn’t be able to see anything. The children watched and now they are in shock. They are afraid.”

A tiny girl in pink leggings was playing in the sand at his feet.

“It’s like the apartheid years, man, when the whites used to come and take our freedom fighters away at night. Acting like skelms [criminals] and killing people and all that. Now why couldn’t they come and sort things out in the day? We want to be treated like humans, not fucking animals.”

“The cops are our enemies here,” he insisted before I left. “They are not looking out for us. We need to look after ourselves in this community.” 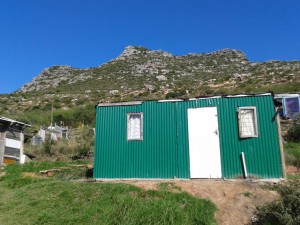 Why was Paul’s immediate response to throw stones? Why are he and his neighbours so opposed to the police? Answering these questions requires stepping back a little – first in time, and then in space – to contextualise the relationship between people like him and the state.

Nearly four years ago, in September 2010, Hangberg exploded in violent protests when police and the City of Cape Town’s anti-land invasion unit attempted to dismantle homes built on a firebreak above the settlement. The bungalows posed a severe fire threat to the wider community, city officials argued, and had been erected without permission. Residents countered that they had nowhere else to live because of chronic housing shortages, and refused to move.

After an agreement between local leaders and the city broke down – residents were instructed to remove the structures in return for promised housing upgrades in the area, which then stalled – teams with chainsaws moved in to deal with the problem.

They were met with burning tyres and a hail of stones, and it took riot police more than two days to restore calm. More than 15 policemen were injured, vehicles and property were damaged, and four residents each lost an eye after being struck by rubber bullets.

In the months following the uprising, a high-profile remediation process was set in place, aimed at peacefully resolving the dispute. But people have continued to build on the contested land, contravening the terms of new agreement between the Hangberg Peace and Mediation Forum, which was elected to represent the community, and the City of Cape Town.

It appears Virgil Adams was arrested for disobeying an eviction order issued two years ago, although nobody seems to know why he was singled out among all the homeowners living in the firebreak, or why he was arrested at night. But regardless of the intentions of the police, this much is clear: when they kicked down the door of his bungalow, he and his neighbours assumed they were under attack once again, and that they would have to fight to defend their homes like they did in 2010.

Is this enough? Can the anatomy of a conflict simply be explained in terms of the immediate historical factors that shaped its trajectory? Of course not – in Hangberg, like in so many other marginalised communities currently at odds with the South African state, there are much broader structural forces at play.

“The police exist primarily to maintain a monopoly on the use of violence and to defend the interests of capital,” wrote Jared Sacks in an article for The Con earlier this year. “It is not a mistake that during revolutionary moments the police are staunch defenders of white supremacy, patriarchy, capitalism and, most of all, the authoritarian temperament of the state itself.”

This Marxist reading of the relationship between society and the police offers a useful lens with which to frame the events that unfolded in Hangberg earlier this week, as well as other clashes that take place throughout working class South Africa on a regular basis. 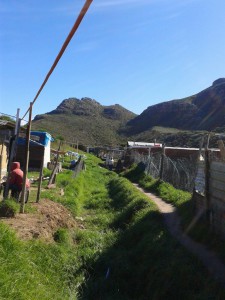 Zoned ‘coloured’ under the apartheid-era Group Areas Act, Hangberg has historically been associated with fishing activities, mainly providing cheap labour for large commercial fishing companies operating vessels and factories in the harbour. (Side note: many of the overcrowded flats were originally built to house factory workers.)

Much earlier, before industrialisation and overt race-based legislation reshaped the fishing industry, generations of Hout Bay fisherfolk targeted line fish and kreef (lobster), the cornerstones of Cape fishing culture. Like in all traditional fishing communities, these activities continued throughout apartheid – and not always within the bounds of the law. But that is a story for another time.

Since 1994, life in Hangberg has become increasingly difficult for many residents: processing factories have closed down and commercial fleets have been trimmed in response to declining local fish stocks, foreign migrants have started competing more strongly for jobs, living costs have risen, and rights allocations, aimed at addressing inequality in the fishing industry by redistributing quotas to historically disadvantaged individuals, have largely failed to offer small-scale fishers meaningful livelihoods.

In the wake of this, illicit moneymaking activities – particularly marine poaching and the drug trade – have grown in prominence over the past two decades, filling a void left by the formal economy. Hangberg has acquired a reputation of lawlessness as a result, a negative image that violent conflicts over land have only reinforced. But although it is true that criminality is rife in the community, responding symptomatically by using blunt instruments of the state, such as midnight raids and forced evictions, simply reinforces the deep-rooted inequalities that give rise to these problems in the first place. And the police, which is supposed to serve the interests of the people, becomes framed in hostile terms.

“I thought it was gangsters coming in, but then I saw the bulletproof vests,” said Naomi Williams, sitting in her boyfriend’s mother’s room. We had been talking for nearly half an hour. “Then there were guns pointing at us. They were shining lights in our faces and we couldn’t see anything.”

Her pupils were dilated and she was punctuating her sentences with sharp little breaths.

“They pulled him out the bed. They were hitting him with their guns and I could hear him moaning. They took him outside the house; it was raining. A cop was holding the front door closed and telling me to hou my bek [shut my mouth].”

I asked what happened next.

“I heard him shouting outside and then he was gone. I don’t know what shape he’s in. I’m so worried about what they’ve done.”

According to Williams and others in the community, Virgil Adams was driven to either Stellenbosch or Bellville – people had heard conflicting reports – and was due to appear in Wynberg Magistrate’s Court on Wednesday morning. Nobody knew what he was going to be charged with.

“But what is he doing in Stellenbosch?” she cried. “This is Hout Bay! They should have taken him to the station here.”

She hadn’t been allowed to speak to him, she said, and didn’t know what time he was appearing in court. “I don’t know where I’m going to find the taxi fare anyway,” she added. “He works, not me. He supports both of us. I don’t know what will happen if we need to pay a fine.”

Her face drew closed. The room fell silent once again. I prepared to leave.

“What will you do tonight?” I asked.

“I don’t want to go home. It’s too quiet. How can I lie in bed not knowing where my boyfriend is, or how he’s doing? But I have to do it. My neighbours will look after me.”

And then, because I had to, I posed one final question. Did she feel like the police were there to protect her?

“The police are my enemy,” she responded without hesitating. “I’ve known that for a very long time.”

She shifted her weight in the plastic chair, stood up carefully, and then it was time to go.

On Wednesday evening, Hout Bay SAPS denied having had anything to do with the arrest. “We know nothing about this,” said the woman who answered the phone. “It was a Stellenbosch thing.”

An unnamed Stellenbosch police official confirmed that Adams had spent the night in the cells there, and that he had been taken to Wynberg Magistrate’s Court on Wednesday morning. The officer said Adams had been arrested for breaching a High Court interdict – presumably building in the firebreak above Hangberg – and that he had been “picked up” in Stellenbosch, not Hout Bay. “There is no way we would have driven to Hout Bay to arrest him,” the officer insisted. “That wouldn’t make any sense.”

The Wynberg Police Station had not heard of Adams. “If he was in court today then he’s either gone home or to Pollsmoor,” they said.

Williams could not be contacted to confirm the whereabouts of her boyfriend.

*Some names have been changed to protect people’s identities

All photos by Kimon de Greef

Main Pic: On the right, the home of Virgil Adams