Celebrating its 40-year existence, this year the African Literature Association (ALA) held its annual conference at the University of the Witwatersrand from April 9-13 under the theme, “Texts, modes and repertoires of living in and beyond the shadows of apartheid”. The association is one of the few institutions that primarily focuses on literature of and from the continent.

The heavyweights in the field that attend and speak at this conference, as well as the scholarship that emanates from it, makes it the premier place to be for an academic within African studies or African literatures. This year’s event featured prominent writers that included Njabulo S Ndebele, Sindiwe Magona, Mia Couto, Ishtiyaq Shukri, Carole Boyce Davies, Simon Gikandi, Liz Gunner and Tanella Boni, to mention just a few.

The schedule was jam-packed with several book launches on disciplines within visual art, literature, music and film, along with roundtables with several scholars discussing the position of African literature and arts in the global setting. Hosted by the school of literature, language and media in the humanities department at Wits, attendees were assured of the highest quality of debate with the best of well published African intellectuals from across the world, hailing from as far afield as the United States, Canada, Ghana, Nigeria, Kenya, Uganda and several European countries.

It was fitting that the first keynote speech at this conference was given by the head of the African literature department of Wits University and renowned South African scholar Professor Ndebele. For a short man, Ndebele packs a punch, and his literary background is clear from his concise and lyrical delivery of his speech, which was titled, “To be or not to be: No Longer at Ease”.

This textual reference revives Chinua Achebe’s text on postcolonial Nigeria. The audience was enamoured as he took us on a journey of his falling in love with literature, specifically African literature, and how this influenced his growth as an intellectual, especially his discovery of banned books during apartheid. “There are few pleasures to beat illegal reading,” he said blithely. His story highlights the growth of African literature and how it mirrors the growth or movement of African writing and scholarship, which is the aim of the conference itself. 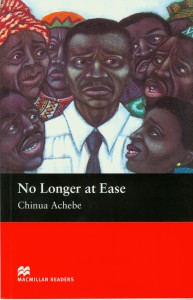 For Ndebele, the novel No Longer at Ease represented a turning point in his life. Having grown up in Christian boarding schools during apartheid, he was constantly bombarded with strict moral codes that pointed to the transgressive nature of his colour and culture. The literature he read, which was mostly European, forced him into worlds within which there was not much he could relate to. So when he encountered No Longer at Ease for the first time in university, he felt affirmed, and described it as “my first literary lover”.

This is when he began to question the forms of identity that had been imposed on him. The titles of black and African were not of his choosing, and yet they came first, before citizen or human being. It seemed possible, therefore, as he delved into African literature, that we were capable of negotiating our own identities, asserting our own ideas of ourselves and rejecting what we felt was oppressive.

It is at this point of his speech that Ndebele chose to speak to the present day by stating his disappointment in the lack of these conscious projects of self-assertion within South Africa today, which is reflected in departments of English literature across the country. There is an upholding of old institutions – a relapse that removes us from the progress of previous decades of growing affirmation of African life and identity. For Ndebele, this is because of the political leadership we have, and at this point he launched into an attack on President Jacob Zuma and his fellow “comrades”.

He attacked the leadership of South Africa rather strongly, going as far as calling Zuma a “black buffoon” for continuing a system in which people still struggle and which is not inclusive. For him, “the history of the extraction of labour for capitalist purposes” that was implemented by colonial forces and then continued under apartheid rule is still present, and this reflects the lack of consciousness Ndebele speaks of. The South African black, for him, is still in a state of unease, lacks consciousness and merely seeks to take over the extractive state that reproduces poverty and maintains him or her as a phenomenon as opposed to seeking to be the new human standard. Ndebele prefers for us to seek to be human as opposed to maintaining the imposed identity of being ‘black’; he wants us to seek to “be the best we can to ourselves and then others will voluntarily notice”.

He motioned to the events at Marikana as a prime example of this; it’s resonant as we had just been treated to a screening of the documentary Miners Shot Down, by Rehad Desai, earlier that day. The film follows the striking miners of Marikana and their journey to the devastating massacre. Desai, in his investigation of the strike and the subsequent commission of inquiry, discovers the heartbreaking collusion between the government, capital (Lonmin) and the National Union of Mineworkers, which was meant to protect the interests of the striking workers. This, for Ndebele, represents the nature of “existing blackness” – Zuma and others who have made it to the top, into capital, into humanity, and are now occupying the same spaces of oppression and taking advantage of the bodies of labour beneath them.

Ndebele pointed to a Fanonian theory of the need to develop a new civiliasation with a developed middle class that raises up all people, not simply replacing an oppressive white class with a black one. “Free people do not scream ‘affirmative action’ – they build civilisations,” he stated. However, he inaccurately placed the blame of the absence of this new civilisation squarely on the concept of the black identity. It seems he identifies blackness with tragedy, a never-ending tragedy, no matter how much black people try to redeem it. Blackness, according to Ndebele, is still very much a transgressive and liminal space that keeps black people uneasy, and by continuing to choose to identify with it we are going to remain products of its creation, which is not our own. Affirmative action keeps black people as subjects, inserting ourselves as opposed to “taking over and controlling, which means ceasing to identify as black but simply as human beings.

This is problematic because it implies his idea of blackness is a narrow one that ignores the large amounts of scholarship and movement in the creation of ideas of blackness not only as a positive identity but also as a powerful force of inclusion and identity formation. His leaning towards “humanity” and identifying first as a human beings resonates his dismissal of affirmative action as an “insertion” into a predetermined system that has never been kind to anybody without a white skin. The idea of the human being has never included the African, the black. It has only ever considered the white. Black people have never been included in Western notions of humanity, and the concept of ubuntu, in an attempt to revive our own traditional values and ideas of humanity, is perhaps a reaction to this.

It is easy, though, to understand Ndebele’s desire to remove himself from the implication of blackness, especially in light of the current South African leadership, which he heavily criticises. and the perpertuation of the same violence from apartheid and colonialism. But this separation from the state of blackness seems misguided, elitist and impractical. It does not engage in the processes considered necessary for all our liberation from the systems he says continue to bog us down. It does not provide practical ideas for our insertion into this “humanity” he lauds and praises, nor does it tell us how to escape or remove ourselves from this “blackness” he criticises. As one of the participants noted, our racial identity has become a point of identity, and, as much as we try, we cannot escape the material reality, the ontological nature of being black. This post-race attitude seems rather farfetched, and perhaps can be seen as something to aspire to but not something immediately available to us.

It is these same ideas and institutions that the scholarship of African literature seems to still be dealing with, albeit on a different level. This year notes the 20th year of freedom in South Africa, and it is apt that the event was held here this year. But who are we ‘post’ apartheid? That’s the question that seemed to be posed by the very theme of the conference and Ndebele himself. For a number of presenters, the very concept of ‘post’ in ‘post-apartheid’ seems to be nonexistent, an illusion. Apartheid was a process, a traumatic one, whose effects are still being felt, and this is evidenced in the literature that is still coming out about those times. Black narratives that had been silenced politically or socially are still being explored. Writers like Wally Serote, Zakes Mda, Sello Duiker and Redi Thlabi are still speaking to apartheid narratives or the presence of the apartheid ghost within the present.

“If Africans are always becoming, when will we ever be?” That’s the question Ndebele ultimately poses. This carries the large assumption that being human is a goal, a finished product in itself. ‘Being’ holds the idea that we have moved on from our “nervous condition” and are indeed “no longer at ease”. A desire for ease is evident in Ndebele’s denunciation of blackness, and yet black people are still responsible for creating their own identity and concept of humanity, which is not encompassed in the universal humanity to which he refers. Blackness is something we have been grappling with and will continue to do so. It has become an institution on its own.

Ndebele’s idealism is understandable, but it does not allow us to grapple with the material realities we face. In the context of the negritude movement, Zuma’s buffoonery represents resilience, a marginal identity that embraces difference and celebrates itself, as Steve Biko advocates. In this way, blackness comes to represent a new form of humanity in itself – one that has progressed and triumphed over dehumanisation. Ndebele in the end cemented his position by declaring his humanity and place as a citizen and rejects blackness, but he left the audience with more questions than answers.

Lebohang Mojapelo is a literary scholar and aspiring academic with main interests in African writing and scholarship. A believer in writing as healing she blogs about her experience with Bipolar disorder on www.exhalingpoint.wordpress.com. She looks forward to a world where one day biologically engineered mini elephants are available for adoption! View all posts by Lebohang Mojapelo →