Brazil has a powerhouse musical legacy, from Antônio Carlos Jobim to Gilberto Gil, from Jorge Ben Jor to Elis Regina, from João Gilberto to Sérgio Mendes. So a World Cup in Brazil was always going to have an awesome soundtrack.

But a new generation of Brazilian musicians is attempting to stake its own claim to greatness, clawing its way out from under the giant shadows of these musical legends. This is a generation that draws on the styles of samba, bossa nova, tropicalia and brega, but at the same time combines them with influences from genres like hip-hop, electro, dub and Afrobeat. This fusion of styles has created completely new genres like techno-brega, and the more commonly know baile-funk. 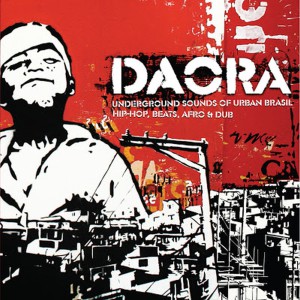 So if you are planning to avoid the classics and are looking for a more contemporary soundtrack to your Brazilian World Cup in 2014, you shouldn’t look any further than the Mais Um Discos label, particularly the compilation Daora: Underground Sounds of Urban Brasil. Daora is a word that originates from São Paulo and is slang for “dope”, which is a pretty accurate description of the 32 tracks you will find on this double-disc compilation.

Compiled by Rodrigo Brandao, a Brazilian hip-hop pioneer from Mamelo Sound System, this compilation is pretty much all killer, no filler. Brandao is a respected member of the contemporary Brazilian music establishment, having collaborated previously with The Roots, Tony Allen and Prince Paul from De La Soul. He describes the tunes selected as “the alternative lanes of Brazil’s third world megalopoli” – a pretty apt description.

“Blending both the foundations of boom-bap and Brazilian rhythmic and melodic heritage, Daora is an introduction to the most cutting-edge beat culture and percussive orientated music coming out of Brazil today,” says Brandao.

Thematically, Brandao has divided the discs into the more hip-hop and electronic tracks on the first and the more Afrobeat and dub-influenced tracks on the second, but these divisions are blurry at best.

Brandao’s own Atoanagaroa puts the berimbau, a single-string percussion instrument from Brazil, and the mbira to good use to create a dark dubstepping monster reminiscent of the work of Cape Flats hip-hop star Isaac Mutant. Other highlights of the first disc include the aggressive rap of Pedaço de Nada, Rincon Sapiência’s infectious tech-hop and the instrumental hip-hop of DJ Mako, which appears to draw some influence from Ethiopian jazz sounds of the 70s.

On the electronic side, Response Pirituba front like Kinshasa’s Konono No 1 being remixed by Dan Snaith’s (aka Caribou) side project Daphni, while Karol Conka sounds like a Brazilian MIA, all banging beats and attitude.

Disc two is mostly funk drums, organ vamps and Afrobeat-inspired horns, often dubbed to within an inch of their lives. Abayomy Afrobeat Orquestra’s Malunguinho is a great example of this, with an organ riff so addictive it should come with a health warning that reads, “This track is addictive and could lead to booty shaking all night long”. Braunation’s Os Tambores do Meu Povo is a great dubby dancehall track, with the guitar and horns so muted and twisted they are barely recognisable, but the beat keeps things warbling along.

BNegão & Seletores De Frequência sounds like a Brazilian version of Baloji’s rumba-inspired hip-hop, while Soraia Drummond’s dub track reminds this critic of that great Dawn Penn track You Don’t Love Me (No, No, No), and is every bit as catchy.

To be honest there are so many highlights on these two discs that it’s pointless trying to pick out favourites. What is clear is that Brazil’s contemporary music scene is in rude health and Daora: Underground Sounds of Urban Brasil is the perfect tonic for the listener looking for the latest dope beats from Brazilian streets.