Rapper Black Moss has an ability to speak sincerely on poignant issues while still staying on top of his game lyrically. One song that illustrates this is Speak Up, which features on his debut album. In it he says: “See what I’m sayin’ is we all often talk about the need for change in our society, like violence, but when it comes to spittin’ the truth rappers are silent. Their eyelids are shut like they see no evil, but their lips keep moving, just to preach that evil.”

In a country such as ours, pronounced as one of the most unequal societies in the world, both mainstream and ‘underground’ hip-hop rarely or fleetingly address this issue. Some rappers, like Zubz the Last Letta and Tumi Molekane, try to, but their attempts to open up this problem for debate, but they engage with it in individualistic ways that don’t lend themselves to questioning or bearing witness to how society’s structure makes those ideas inapplicable to the poor majority. The recently deceased civil rights-era poet Amiri Baraka, when meditating on this problem, said that “thought is more important than art. To revere art and have no understanding of the process that forces it into existence is finally not even to understand what art is.”

When thinking of the power hip-hop has in shaping worldviews, I often ask myself whether it even partially offers a glimpse into how ordinary people struggle in this country. If the saying about art imitating life is true, is South African life written in the artistic output of local hip-hop? The answer is unfortunately a resounding no.

But a voice from the margins reverberates in low decibels. The voice is that of an emcee called Black Moss; Black Master of Spontaneous Sentences, he calls himself. The articulate emcee started making music while studying at the University of KwaZulu-Natal back in 2006. With four mix tapes under his belt and numerous singles, and recently as a member of the crew Part Time Cooks, Moss is the quintessential long-distance runner in hip-hop with a burgeoning catalogue and a steadily growing national footprint. The wordsmith released his debut album (which was recorded in just four days), Public Interest (Post ’94), in September 2013. You can download the album from Black Moss’ SoundCloud Page here. 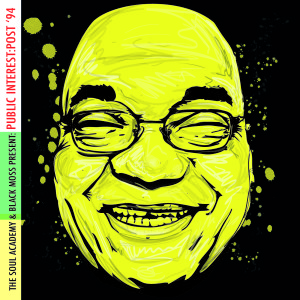 In a documentary on the making of the album, he says: “In this particular album I do wanna come out and say, you know what, I wanna make a bold statement. I don’t wanna sugar-coat it. I don’t wanna say, like, ‘Oh the ANC government is trying their best’. No – they’re fucking us in our assholes! It’s like they’re raping the people.”

The album consists of 18 tracks that delve into interstices of a mind at odds with some of the normalised ways of seeing the South African reality, and in so doing he offers us new lenses to view this reality. From the onset, Moss invites us to a rather disconcerting cypher from which a candid dialogue can emerge. The album consists of three voices emanating from the same body, each embodying multiple ways of talking of the South African reality. We first encounter the sociopolitical voice speaking the loudest about the killings of Steve Biko and Chris Hani, questioning the leadership of the ANC, the deplorable conditions of the poor majority in the townships, and looking at the dishonesty within the music industry.

The track Questions, for instance, deals with the slaying of Andries Tatane, noting how society now frowns upon individuals who question the status quo. The track symbolises how capital organises how we see, feel, act, and interpret issues of power and powerlessness. Misunderstood Souls is a representation of this powerlessness. Here Moss is accompanied by three other lyrically gifted emcees – Manelis, Flowsik and Merel – playing different roles that speak and accentuate this helplessness. The track tells the story of a young boy who has no other option but to turn to a life of crime and gangsterism. The rappers paint an accurate picture of the township, and of characters we see roaming around it day in, day out. This beautiful piece of storytelling is accompanied by a moving beat and hook.

Moss’ second voice is the personal, introspective voice. This voice reaches its creative apex in the song titled Dedicated To, where he pays homage to those he considers “dreamers”. This tag applies to those who fight to make their lives better, and includes women, his peers in the music industry and so on. But in the song’s need to affirm the “dreamers”, it flirts with ideas Moss seems to want to dispel when his socially conscious voice emerges. This individual-versus-collective paradox is an understandable tension that derives from a need to affirm those whose stories of triumph and success are underrepresented in the mass media.

To round off the album, a rejuvenated voice from within hip-hop critiquing hip-hop emerges. Here he becomes the stereotypical emcee who praises himself as being the best, which is completely unnecessary as he’s already done the work of proving himself a competent rapper.

One of the highlights of this album are the beats. The Soul Academy, made up of Lunatik and Zenith, live up to their name, delivering beats that are soulful and moving, yet hard-hitting, gritty and grimy. The Soul Academy break all the rules with electronic and funk sounds while still bringing a classic old-school feel to album.

Whether Moss genuinely continues on this path or, like countless others before him, abandons speaking truth to power and is incorporated into celebrity culture and privilege Remains to be seen. The mass media construct the limits of the art of truth telling itself, and artists enter the realm of art with self-censorship already innate in them. It is because of this that when they are steadily incorporated into the mainstream media, razor-sharp critiques of power fall by the wayside. Artists who maintain a sharp, critical voice through all the media noise should be applauded, and Moss is a reminder of why.

I write about music. I read about African history and philosophy, gender, race and other nice things View all posts by Zimasa Mpemnyama →