I’m Not Your Weekend Special: Portraits on the Life+Style & Politics of Brenda Fassie

Botswana: 1983. Arriving from the UK, jet-lagged, all I want to do when I hit my dusty faculty flat is sleep. It’s not to be. Across the road, masked by bougainvillea, the University of Botswana campus throbs with music: a single track on what feels like 24-hour repeat. A plastic, plangent keyboard riff and a powerhouse female voice belting out what my groggy ears eventually make out as “I’m your” – or is that “I’m no”? – “weekend special”. What the fuck is a weekend special anyway?

The words stopped being a mystery fast. In Southern Africa, patriarchy was upfront, and if a guy could afford it – or even if he couldn’t – there would be one woman to service his working life and a clandestine other to answer the disco-and-booty call on Friday night. Some of my students lived that life. Desperately clinging to university studies despite cash-strapped families, a sugar daddy was not evidence of greed, but of determination to complete by whatever distasteful route. Those paunchy, sweaty, arrogant 40-year-olds were nobody’s Prince Charming.

Botswana: a year or so later. Now working as a journalist, I share a cab to some hall where, sandwiched between posters for last month’s Mahotella Queens and next month’s Johnny Mokhali, Brenda and the Big Dudes are playing. “Brenda’s coming,” say the sweaty lads with dreams in their eyes, crowding me in my seat. “Yes,” declares one, “I can ask her out. I can.” He’s never going to get the chance, and nor am I to do the planned interview. The hall is packed to immobility, the stage high and far away. Then, after a lacklustre opening act, a tiny, imperious figure explodes on to the stage. She’s like something from a manga drawing: impish heart-shaped face on a lithe, almost-child’s body; vulnerable in the emotions expressed in the songs, tough and totally in control of her performance and her audience. She’s a steely little fairy who commands that stage. Not every singer with that kind of star quality is equally skilled as a vocalist – when you have that power, it doesn’t matter – but Brenda is. No doubt in my mind: this is the real thing.

Standing behind her in the buffet queue at the President Hotel the next day, I’m surprised. She’s even more fragile close up: bright yellow dress, bright yellow beads on her braids; soft voice, almost diffident ordering her food; flattered that I (and half the room) recognise her; shy and slightly surprised a newspaper here wants an interview. And so to the band rooms, where the usual male musos and buddies slob around drinking, where we go through the life story, and she says – as she often did, before and later – “I love singing. I love it more than anything else in my life.” And, wistfully: “I want to do more than this. Maybe when I’m older I could be a jazz singer or sing some other kinds of songs too.” It wasn’t the last time she said that either, but it’s not clear how many people were ever listening.

Botswana: later yet. I’m writing news and subbing now, so somebody else, a young male journalist, gets assigned the by-now automatic Brenda interview. He enters the newsroom the following morning giddy with a story. He’d arrived at Brenda’s suite with questions dutifully written out. Somebody in the management entourage took the paper and said they’d prepare answers. Brenda was (his words) “told to look after him” while that happened. Though he wins admiring nudges and whistles from male colleagues, it’s unclear how much of the “looking after” is in his imagination – quite possibly, most of it. What is not imaginary is the page of typed-out answers he delivers – definitely, from their language register, not written by Brenda. We argue about whether we can present PR answers as a credible story. We don’t discuss the gender stuff. 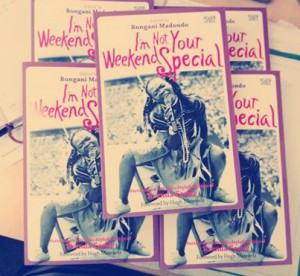 We rarely did, back then in those 1980s newsrooms. And Bongani Madondo’s nicely curated collection of essays shares some of those rose-coloured gender perspectives. (Because this is 2014, Brenda’s mercurial sexual identities do find their place in the narrative – but that’s all.) There is wonderful stuff in the book, much of it written by Madondo himself: his memories of Brenda as the doorway into music for his younger self, and a powerful exploration of Brenda’s Xhosa roots which stops far too soon – I wanted that essay to last longer and imagine deeper. There is welcome archiving for some equally wonderful past writing by others: Charl Blignaut’s In Bed with Brenda, and Njabulo S Ndebele’s Still Thinking of Brenda. There’s a useful discography and valuable documentation of the origins of Weekend Special. And there’s much reminiscence about Brenda’s personality, telling us, as if we didn’t already know, that she could be a warm, sweet, generous soul, and a wholly self-obsessed monster of an addict – just like anybody else caught by those pressures.

We know from memoirs and reminiscences that the entertainment scene of the 1970s and 1980s was not a great place in which to be a young woman (and, in some sectors, is hardly better now). While some famous impresarios treated their young female discoveries as protégées to be developed, others saw them as sexual property. Some did both. “We were not skilled,” Mercy Pakela told Cosatu. “The record industry is run by men who want you to open your legs … They will tell you: we were waiting for you to grow up so now you can open your legs.” Bands with a female vocalist were settings in which patriarchy flourished. Former Big Dude Desmond Malotana reminisced in one of Brenda’s obituaries: “We managed to control her and she listened when we called her to order.” While some managers and producers nurtured the best in their musicians, others deliberately infantilised them, often supplying drugs or booze to keep them in thrall while publicly mourning their artists’ excesses.

Hugh Masekela, in the book’s foreword, shows us the Brenda nobody else writes much about: Brenda the musician. He describes a woman who had a wicked sense of humour, “compositional genius and virtuosity”, a prolific composer. He describes how in New York she would “teach new bass lines … dictating rhythm and harmony parts, scatting drum grooves, singing counterpoint lines … making up background voice parts, funky phrases [and] fills.” How did it feel to be that person, when your band saw you as someone to be “called to order” and when your management often preferred the little-girl songs that had established your brand years back? We recall with justifiable horror black musicians depersonalised by playing behind a curtain or under a white name, and how that contributed to emotional desperation and addiction. How different is that from a highly capable woman musician constrained behind lesser identities designed and imposed by males?

Brenda may have become big enough to outgrow those overt constraints. In the process, they may also have scarred her. For those who profited from her music, the young Brenda was their weekend special: ignored, kept quiet, humoured, indulged, discouraged from maturing, maybe doped-up, until Friday night, when a phone call pimped her on to some stage. Maybe that’s why she sometimes sang both versions (“I’m your” and “I’m no”) of that lyric?