There has been a Hebrew Facebook page circulating that demands the murder of one Palestinian every hour that the three Israeli teenagers, who disappeared on June 12 while hitchhiking late at night in the West Bank, are missing. The dead bodies of the three teens were found two nights ago near Hebron. Although evidence is yet to be publically released, the Israeli government claims that Hamas is responsible, and it would seem as though the Israeli military is set on carrying out the desire of the 20 000-plus facebookers who ‘liked’ this page. The social media page is premised upon the assumption that ‘Palestinians’ (the entire populace) are behind this, and so has been the Israeli Defence Forces’ campaign of collective punishment – Operation Brother’s Keeper – over the past 18 days that has resulted in the imprisonment of more than 500 Palestinians, the death of six mostly male youths of the same age as the missing Israeli teens, and the destruction and invasion of more than 1 000 homes, offices and buildings. Now that the inexcusable and disgraceful crime of the abduction and killing of three Israeli lives has come to a head, all indications are that the ‘operation’ of collective punishment will evolve into a large-scale mission in multiple forms of vengeance – aimed at harming yet more innocent young lives.

Perhaps the sort of explicit, socially sanctioned racial hatred seen in this and other similar Hebrew Facebook pages is in keeping with the fervent proclamations made by Prime Minister Benjamin Netanyahu and the obsessive coverage in Israeli media. The most widely read English daily in Israel, The Jerusalem Post, ran an opinion piece a few days ago detailing the various political opportunities the military operation may have held to find the teens, including the annexation of major portions of the West Bank, collective punishment of Palestinians by cutting electricity supply to Gaza, and the renewal of targeted assassinations. On Monday night, Netanyahu said in a statement after the bodies were recovered that they “were kidnapped and murdered in cold blood by beasts … Vengeance for the blood of a small child, Satan has not yet created. Neither has vengeance for the blood of three pure youths … Hamas will pay.”

Acclaimed Jewish-American academic Judith Butler, in her 2004 book Precarious Life: The Powers of Mourning and Violence, reflects that the media’s role in the ‘war on terror’ (as this instance is a fragment of) is to “provide the narrative means by which ‘the human’ in its grievability is established. Through this extensive hyper-realisation, we also make instinctive assumptions regarding right and wrong, evil and humane.”

Palestinian life is not worthy of grief in mainstream and culturally dominant approximation. In reaction to the recovery of the Israeli boys – Eyal Yifrah, Gilad Shaer and Naftali Frenkel – on Monday night, notaries of the world released statements in rapport with their families and in virulent condemnation of the perpetrators, recorded minute by minute in a Haaretz online newspaper live stream: United States President Barack Obama termed it a “senseless act of terror against innocent youth” and offered the “full support and friendship of the United States”; the UN through Ban Ki-moon called the crime a “heinous act by enemies of peace”; the Vatican expressed sympathy; and British Prime Minister David Cameron expressed his horror that “no parent should have ever to suffer such heartache and grief”.

Nothing has been said of the parents of the six Palestinians killed since Operation Brother’s Keeper was launched, nor of the 1 500 children who have died at the hands of Israeli forces since 2000, the 6 000 injured or the 10 000 imprisoned. None of the Palestinians killed since June 12 were involved in the crime at hand, or guilty of any particular offence other than being an unarmed Palestinian confident or stupid enough to look a wall of the second-most powerful military in the world directly in the eye as they militarise and illegally occupy your land and everyday life. I cannot even access their names, as the world unites in grief over other approximate and definitive lives. Nor will anything be said in grief over individual lives when the next hailstorm of terror over Gaza’s skies opens in a vengeful and deeply unfair act of ‘justice’.

Because acceptance and engagement with a state that inflicts such crimes against humanity is widespread, certain images and words that might conflict with our warm familiarity towards Israel do not appear in the media. Certain names that might confuse the logic of consensus are not audible, and the violence inflicted upon their bodies, Butler tells us, is “derealised and diffused”. Such prohibitions suppress the dissent and anger that would expose the concrete, human effects of this violence. 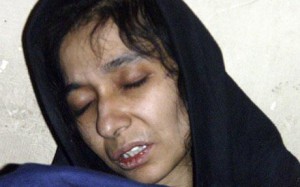 A further case in point is the incarceration of Dr Aafia Siddiqui, who is currently serving 86 years in Texas based upon an extradition and trial in violation of international human rights law. Perhaps you remember her through the media title she was given: “Lady Al-Qaeda”. What is less well known is that her actual title is Dr Siddiqui – mother and passionate advocate of the transformation and modernisation of the Pakistani education system. The claims made of her ties to terrorist organisations by the FBI have never been evidenced, and as her sister, also an American PhD graduate in neuroscience, insists, they are contradictory to her pursuits, affiliations and character.

At the height of former Pakistan president Pervez Musharraf’s herding of ‘terrorists’ in 2003 in order to gain favour from the US in its endless global scouring for bodies upon which to inflict retributive justice, Siddiqui and her three children under the age of six were abducted under mysterious circumstances. The youngest of her children has never been seen again, and the other two were found, isolated from each other and their mother in 2008 after a tireless search by her Karachi-based family. The FBI denies any knowledge of her whereabouts before 2008, but the US military was directly involved in her arrest in Ghazni soon  after her reappearance at the time. Siddiqui emerged out of a void, drugged, weakened, and with scars of abuse near the notorious US-run prison in Bagram, Afghanistan, where former detainees have testified to have seen her. It doesn’t leave much to the imagination to connect the dots.

The charges laid against Siddiqui were not terrorism – a charge that would have been based upon the anti-terrorism legislation and specific associated courts intended to allow for conviction on little evidence. Instead, she was tried for the attempted murder of her six captors at the time of her arrest in Bagram. The most outrageously flawed and partial evidence was presented to the judge, Richard Berman, who admitted that the prosecution stood on unconvincing ground, yet nevertheless proclaimed that Siddiqui, guilty of attempted murder or not, was a danger to the nation for her ideology. Her sentence of 86 years is grossly excessive for her supposed crime, and she is now in solitary confinement for the remainder of her life in Carswell Prison, where the abuse of female prisoners has been known to be rampant. As US officials have repeatedly told her sister, “the normal rules don’t apply to Siddiqui”.

There are markedly different ways in which physical human vulnerability is distributed across the globe. The three young missing Israelis sanctify the effective mobilisation of the forces of war, yet other lives, such as Siddiqui’s children for instance, or the six young Palestinians murdered these past weeks, according to Butler, will “not find such fast and furious support and will not even qualify as grievable”.

Indeed, should we care about the invisible ghostly terrorists held in prisons beyond their national borders, without fair trial and subject to a limited interpretation of rights? Who speaks for them? Certainly not the international courts and institutions set up to protect ‘humanity’. Perhaps we no longer see them as human through the incessant derealisation in media, political rhetoric and on Facebook. But these negated individuals have a strange way of remaining animated and resisting in abrupt and frightening ruptures within our ‘normal’ arrangement of civilized time and space.

So, Butler tells us, they must be negated again, and again, and as they never really ‘were’, and thence they seem to “live on, stubbornly, in this state of deadness”. The US blockbuster World War Z, which posited the civilized world against zombies, unabashedly located in the Middle East and South Asia, reflects this unwittingly in its endeavour to characterise the ‘war on terror’ as one of the living against the neither alive nor dead, “but interminably spectral”.

A visibly drained and emotional Dr Fowzia Siddiqui addressed a small community gathering in Durban this past weekend, pleading for South Africans to assist her sister in finding justice in whatever way possible. I asked her why she would ask South Africans for help. The Harvard graduate reasoned that South Africans have a good standing in human rights issues on a global stage, and that certain internationally recognisable and influential persons dedicated to human rights are based here.

The sad reality is that SA newspapers are littered with instances to indicate that within the national framework we have demarcated zones of grievability. Asking questions about the inequalities of human life, suffering, vulnerability and protection is a global conversation.

This in part because of how internationalised media play upon these inequalities to authorise and heighten racial hysteria, allowing for an amorphous, transboundary racism to proliferate. This in turn allows for ‘self-defence’ and ‘states of emergency’ that sanction any number of human rights violations and ‘extra-legal’ activity. We should care because all civil liberties for everyone are rendered fragile in the process, not just those of the spectral. So the extra-legal activity of the US and Israel in the endlessly renewing ‘war on terror’ are our concern. And they beg us to ask ourselves what kind of extra-legal activity we may sanction through indifference to shack dwellers’ house demolitions and state violence on citizens, and to what extent this is a habitual perpetuation of the extra-legal activity conducted in states of emergency under an apartheid government that weeded out terrorists at will.

The interminably spectral are an indication that the utility of an internationalised morality, and the mourning of life, is malleable and exclusive, as is the contemporary conception of human rights. We still have to learn how to include in this concept those whose values may well test the limits of our own.

For more information on Aafia Siddiqui and how you can assist in her search for justice, go to www.aafiamovement.com.

Nina Butler is a Masters student at Rhodes University, yoga teacher, artist and writer. Her research area is in Palestinian and Israeli culture, identity, and representations. View all posts by Nina Butler →