When my cousins and I were growing up, we spent school holidays at my aunt’s house in Pretoria, where we’d spend evenings listening to bedtime stories about ghosts.

I still remember the one that used to scare me the most. It was about a young girl who is said to have gone to her primary school one morning and never came back. A while after people had given up on finding her, her ghost started to roam the streets at night. People claimed to have seen her near the school dressed in black dungarees, a white shirt, socks, shoes and a schoolbag. My aunt lived near the school.

At this point in retelling the story, she would stop to ask if we had heard the noise coming from outside. Sometimes she’d swear she just saw the girl through the window and asked whether we also wanted to see her. Obviously, by this point I was either close to peeing myself or desperately willing my body to shut down so I could go to sleep immediately. Looking back, I realise that was the desired result. 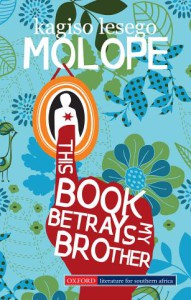 Another story that used to make the rounds was about a girl called Vera the Ghost, who had died in a car crash. Fast-forward to 2014. I am reading a copy of Kagiso Lesego Molope’s This Book Betrays My Brother. Thirty pages into the book, Vera the Ghost makes an appearance.

Vera is described in the book as a “tall woman who would have been in her late 20s if she had actually been alive, who was said to run along the edge of the main road at night stopping traffic, her clothes torn, her arms bare and skinny. If you stopped to help, they said, she would come banging on your window and beg for a lift home. And then, with her standing so close, with her face only inches from you, you would see that she was crying.”

But the book is about more than just ghosts. And because the title sort of gives it away, reading through the first few chapters is a bit of a race to get to the point.

It follows the life of 13-year-old Naledi, her parents and brother, Basi, as they navigate post-apartheid South African life in a town called Marapong. They move from eKasi to the top of the hill, DiX, where the wealthy black families live. Naledi, or Nedi (as she is called in the book), is very close to her brother, but this closeness is tested by a sexual assault.

From here the pace of the book picks up as we race from the assault to the family and community’s reaction until Nedi decides to come clean to a friend. Although the book centres on her alleged betrayal, one can’t help but feel sorry for Nedi. I think this is the power of Molope’s decision to have the story narrated by a teenager girl. There is an innocence about Nedi, but also there is also strength in her bravery.

Even in how the book touches on issues like feminism, homophobia and sexuality, having it narrated by a young female voice makes it feel less preachy and more like being taken into someone’s confidence, as if you are with Nedi on her journey as she tries to figure it all out.

The story is peppered with Setswana words (like Letagwa, bathong, dikolamolora), which I absolutely loved as a Setswana reader. (Molope has a glossary at the back for those who don’t understand the language.) This made it feel so familiar, as though the author grew up down the road from me or something.

The familiarity reminded me of a quote from Teju Cole’s Eight Letters to a Young Writer, which goes: “Have you ever experienced the sensation of a text that felt like it was targeted not to a general reader but to you in particular? Have you felt, at times, a sort of pact between you and the writer?”

This Book Betrays My Brother is the closest I have come to that feeling as someone who grew up in the North West in the 90s. I can’t believe I only discovered it two years after it was released.