At 11.30pm last night, I received two texts in a short space of time. One was from a friend in Berlin about the football match that Germany had just won: “This city is going mental!”

The second was from a journalist friend in Beit Lahia, Gaza: “They’re shelling my neighbourhood.” He sent another 10 minutes later: “Urgent. Two people just died in Rafah.”

By this time 27 Gazans had been killed in 48 hours by the Israeli military, which had been bombarding the city by air and sea in “Operation Protective Edge”. I immediately went online to see what was happening. But it was difficult to figure out which article to read when different websites had disparate headlines – some slightly different, others totally contradictory.

If I had not spoken to my friend and read only BBC News, I would believe that “Israel (is) under renewed Hamas attack”. I would then have watched videos about how “Israelis scramble for cover”, “Violence is not the path”, “There is no alternative but airstrikes”, and “Gaza doctors are ‘low on medicine’”.

If I had gone to CNN.com, I would have found information only in tiny writing under the narrow “latest” column on the left, under the headline: “Israeli: May need ground operation”. This comes in at number 7, just after “NEW: Original voice of Pinocchio dies”.

There is no greater pressure on the media than when those two scary words – Gaza and Israel – happen to be in the same sentence. There can be no more subtlety and quiet leanings; if there is any time when media houses are going to have to be clear about their biases and agendas, it is now. It’s when newsmakers are desperate to quell their audience’s potential worries and changes in support, as well as the big boss and funders, that ridiculous headlines happen, and presentation of content just gets stupid.

It’s difficult for media to say that Israel made a booby. It is always blamed on something that Palestinians, usually Hamas, did first. They’re just titting for the tat, protecting their own.

Most websites, when explaining an attack by the “Israeli security forces”, apply the built-in disclaimer of something along the lines of “because of rockets fired into Israel” or “to attack Hamas militants”. What they should really be saying is “because Israel hates to lose a dick-measuring contest”.

The Washington Post’s headline read: “Israelis scramble to shelters amid salvo of rockets in Gaza” The intro told us that “Israel sends more than 150 rockets into the Gaza Strip as the military hits coastal targets, killing five Hamas operatives”.  There is also an option to watch a slideshow entitled “Airstrikes target Hamas” with a blurb that says “the military hit more than 50 sites in a campaign to stop heavy rocket fire from the Gaza strip”.

Let us be clear. There has not been a single reported death in Israel since the start of the attack on Gaza. And none of the seven children killed in drone attacks were Hamas militants.

The Israeli military says that more than 150 rockets had been fired into Israel since Monday night. But Israel employs the “Iron Dome” missile defence system to intercept rockets. Most were intercepted. Two people were injured by shrapnel.

Israelis have become victims again! No disclaimer needed. But come tomorrow, when a few more Palestinian bodies will be found amid the rubble, it will be because of the rockets fired into Israel, made of cheap, rusted metal, which mostly fall in rural areas just outside the Gaza border. And it’ll be because of the Israeli military’s attack on Gaza. Because of rockets fired. Because of a Palestinian boy found lynched and a Palestinian-American teenager beaten up by Israelis because of three Israeli settler teenagers kidnapped and killed because, because, because.

But the sequence of events does not go as far as to explain why Hamas / Palestinians / Same thing / Whatever are angry in the first place, that Israel has been illegally occupying the West Bank since 1967 and blockading Gaza since 2007 in a system almost exactly like apartheid for more than half a century. Because if it goes so far, it has to go even further to why Israel is there in the first place, and it’s at that point that a bunch of governments, funders and lobbyists − those uncomfortable at the mention of World War anything or with alternative economic ideas about why Israel is so loved − start to squirm.

So it’s probably better for the mostly Western media to make sure Israel stays neck in neck in that contest so as to not bring too much negative attention to it, and also to keep the excitement and perceptions on the up. And they’ve clearly got it under control: by the end of writing this article, dead Pinocchio is now at number 7 on CNN’s tiny column on the left of the screen, and below it, at number 8 on the agenda, after the agenda, after the agenda: “Militants storm beach near Israel base”. Here we go again. On your marks …

To see these screen grabs in a gallery format, click on one of the images 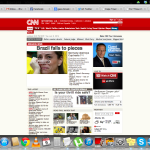 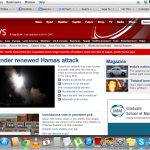 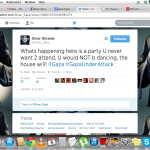 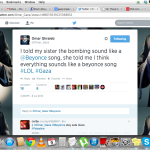 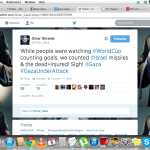 Ilham Rawoot hates everything and everyone. She is the girl who ruins dinner parties. She freelances, writes for Al Jazeera, Dazed and Confused, the Mail & Guardian and Whatwhat, and aspires to bring the world to islamic anarchism. View all posts by Ilham Rawoot →