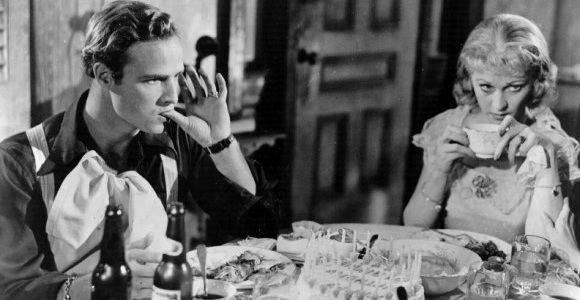 After the tremendous success of A Streetcar Named Desire, Marlon Brando immediately set about distinguishing himself from his contemporaries. Rather than rushing towards the intense but shallow glimmer of the Hollywood paparazzi, this young man, unlike so many of the vacuous celebrities who offer little other than a momentary distraction as they cross our screens, escaped back to New York. Brando did not return to the stage but continued to work in motion pictures. His reasons for choosing celluloid over theatre were pragmatic rather than driven by romantic ideas about cinema. He dismissed acting as “the expression of a neurotic impulse. It’s a bum’s life … The principal benefit acting has afforded me is the money to pay for my psychoanalysis.” Despite the vast quantities of praise ladled on him, Brando just did not take his extraordinary acting ability seriously. This probably stemmed from a deep-rooted feeling, instilled in him from a young age, that he was not good enough. He felt anything he achieved was not special, and could not be special precisely because he had achieved it. The roots of this profoundly negative sense of self lay primarily in his relationship with his father. But although he adored his mother, she also left him emotionally damaged in various ways. His attempts to manage the pain resulting from the neglect of his alcoholic mother led to a lifelong addiction to food. Brando’s life, and consequently his acting, can be read through his relationship with food.

In his autobiography, Songs My Mother Taught Me, Brando recalled how he would come home from school to find his mother passed out. He would then turn to the “icebox” for solace. He would grab whatever was in there and try to fill the deep hole of loneliness. As a result of these afternoon food raids, Brando developed a ravenous appetite that stayed with him into adulthood and did not go unnoticed by his co-stars. Karl Malden, who was often paired with the young Brando, recalled that during the shooting of One-Eyed Jacks (1961), a film Brando directed as well as starred in, he would eat “two steaks, potatoes, two apple pies à la mode and a quart of milk.” As he got older his appetite became even more ravenous. According to gossip, he would eat, as a snack, a pound of fried bacon stuffed into a loaf of bread, an improvised bacon bunny chow. Although this rumour is pervasively reproduced across numerous websites, its veracity cannot be proven. But while the plethora of stories, recollections and rumours about Brando’s eating habits may, in some cases, have taken on a life of their own, it is clear that he had an unhealthy relationship with food. Brando recognised this himself and viewed his relationship with food as a kind of addiction. He surmised that he had inherited his addiction gene from both his parents – they were addicted to alcohol, he was addicted to food.

His prodigious appetite was matched by his desire for sex. According to his own admission he had hundreds of lovers, including Marilyn Monroe, Ursula Andress and many others, women and men.  Brando often worked as hard to seduce his co-star as he did on his role. When shooting Viva Zapata!, the film based on John Steinbeck’s fictionalised account of Mexican revolutionary Emiliano Zapata, he worked very hard to seduce his co-star, Jean Peters. Peters was dating Howard Hughes at the time. The deeply paranoid Hughes had Peters chaperoned on the set, but this only made her all the more attractive to Brando, whose endeavours to seduce her, which included breaking into her apartment, were thwarted by the vigilante chaperone. Peters never gave into Brando’s desire, but most women were unable to resist him. Hollywood starlets fell over themselves to fall into his bed. Brando’s fans were equally devoted to their lust for him. Living in New York after the success of Streetcar, he was stalked by young woman whose desire was so powerful she called him up and told him she wanted to cannibalise him. Rather than being petrified in the face of this madness, Brando, always fascinated by the unusual, invited her over to his apartment and seduced her. Recalling this incident years later in Songs My Mother Taught Me, Brando remembered that although he was aware that his actions with regard to this disturbed young woman were wrong, he still could not control his impulse.

As his fame grew rapidly through the first half of the 1950s with each performance – from Viva Zapata! to Julius Caesar, The Wild Ones and On the Waterfront – Brando continued to impress his critics by demonstrating his versatility, from playing bad boys to a fantastic performance as Mark Anthony in Julius Caesar. At the height of all this fame, his mother died. He was deeply affected by her death and it led directly to a downward spiral in his personal life. This was reflected in his work, as well as his growing reliance on food. While the young Brando could subsist largely on junk food – tubs of ice cream, jars of peanut butter and greasy take-out – and get himself ready for his next role with a crash diet he found. As he became older, these crash diets became less effective.

The physical cost of his reliance on food for emotional solace was evident in his growing girth. During the filming of One-Eyed Jacks, his crew gave him a belt for his birthday. Awed by the sheer amount of food he consumed throughout the shoot, they also wrote a note, to accompany the gift, reading, “Hope it fits”. Brando’s unhealthy consumption of food during the shooting of One-Eyed Jacks was evidence of the personal and professional turmoil he was experiencing. In his personal life, his marriage to his first wife, Anna Kashfi, had disintegrated and he was in a bitter custody battle over his son, Christian. His directorial debut was also becoming unmanageable, delayed and running over budget.

Brando’s excessive appetite for food and lovers was matched by his appetite for books and knowledge. He had a personal library of thousands of books and polished them off with the same gusto with which he gorged on his favourite breakfast – which, according to friend and actor Carlo Fiore, consisted of corn flakes, sausages, eggs, bananas and cream, and a huge stack of pancakes drenched in maple syrup. While he was young his metabolism was able to handle these quantities of fats, carbs and sugar, and a quick crash diet would get him back into shape for his next film. But as he became older this became increasingly difficult to execute and Brando often turned to throwing up. He claimed he was not bulimic, but he purged often enough to leave him with a tear in his oesophagus.

Brando’s relationship with food and his changing body shape was as important an element to his electric screen presence as the set, props, his voice and the script. As a young man he had a cat like grace and the ability to explode into motion in a second. He was constantly prowling the screen in A Streetcar Named Desire. In The Godfather, his growing girth demonstrated the power of a mafioso don, yet you understood there was still great power and that it could be unleashed at a minute’s notice. In Last Tango in Paris, a much older and bigger Brando still possessed an elemental sexuality. By the time he turned up for the shoot of Apocalypse Now he was so large that his entire role, as Colonel Kurtz, had to be rewritten to fit with his body. But unlike any lesser actor – and most of them are – Brando turned what would ordinarily be a problem into an exceptional moment of celluloid art. His looming, shadowy onscreen presence seems as grounded in the jungles of Cambodia as Angkor Wat and you, the viewer, are left haunted by this spectral performance. Brando’s character becomes a dark, shadowy presence that roams around inside the viewer long after the movie is finished. And when Kurtz mutters, “The horror! The horror!” with his dying breath, you are left feeling that Brando himself understood what true horror is in the world.

For fellow actors Robert Duvall, Martin Sheen and Jack Nicholson, Brando’s performance was as much of an artistic event as Picasso’s work on canvas. Brando was a game-changer. After him cinema would never and could never be the same. What was there left for other actors to do? In his Rolling Stone, obituary Jack Nicholson recalled:

“Almost everything the guy ever did, in my opinion, was revolutionary. You almost felt stupid being naturalistic after he came along, because you felt, ‘Well, that’s already been done.’ I remember thinking that I’ve got to find another way to approach this if I’m going to have my own little corner of the job market.”

His personal life was a rollercoaster ride, but his politics were spot on and he was a deeply humane man. Brando always felt an instinctive solidarity with the oppressed. He joined the civil rights movement and, along with Paul Newman, went down to the South of the United States with the freedom riders to desegregate the buses. In 1963 he marched into Washington hand in hand with his long-time friend and one-time flatmate James Baldwin. When Martin Luther King Jr was assassinated, Brando bowed out of a major movie role to devote himself full time to the civil rights movement. Bobby Seale was a close friend. Brando gave financial contributions to the Black Panther movement and attended the funerals of slain Panther members. In reprisal for these acts of solidarity he was shunned – movie theatres in the Southern states boycotted his films and he was blacklisted by Hollywood, with the intention of shutting him out of major movies. This did not deter Brando. After his virtuosic performance in The Godfather, Hollywood accepted Brando back into its hallowed halls by awarding him the Oscar. Brando did not care for their awards or their false deities. Instead of personally accepting the award he used the opportunity to bring attention to the plight of native Americans. Lifelong conservative Clint Eastwood – a man with about as much talent in front of the camera as a block of wood – booed Sacheen Littlefeather when she came up to give a speech in Brando’s stead.

Once again he was on the outside. But Brando was not concerned, because he was looking for something more than fame and adulation from an industry he largely held in contempt. He was interested in understanding the human condition and in trying to make the world a better place. But at the height of his fame it was already clear to those who knew the brilliant but wounded man behind the radiance of the star that he would carry the hurt and trauma of his Nebraska childhood throughout his life. Brando would spend the rest of his days searching for a way to repair, heal or cover up those traumas, but no amount of food or sex – or marriage, spirituality, philosophy or psychotherapy – would repair the damage done to him as a child. Perhaps he should have accepted, as Bruce Springsteen wrote in Nebraska, that “there’s just a meanness in the world”.