It has been nine days since the latest escalation of violence in the Middle East began and there is no end in sight.  The UN reports that eighty per cent of the 192 deaths reported so far have been civilians, 36 of them children. The ones who are bearing the brunt of the war are the people trapped in Gaza who have nowhere to go as the strip has been under siege since 2007.

Abier Isamel El Masry is a 27 year-old English teacher from Gaza City. She lives in town with her four sisters, her brother and her parents. Most of the people in Gaza can’t get rest overnight when Israeli airstrikes normally reach their peak.

We asked Abier to write down her thoughts one night. 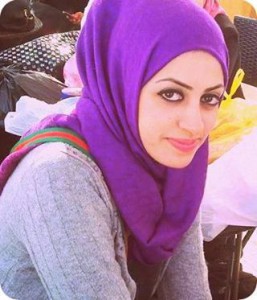 I’ve been having sleepless nights with sounds of explosions and ongoing raids over the occupied skies of the Gaza Strip. This is my account of the evening life for the Palestinian people who face this inhumane and brutal attack by Israel.

At night you can hear nothing but the sounds of explosions, ambulances and crying children.

Israel’s armed forces continue to launch air raids on us, murdering more civilians in the Gaza strip each day. Everyone is being targeted. Everyone feels like they are a target.

Many houses were shelled by Israel’s rockets, without a prior warning, while the families were sleeping peacefully.

A visit to the main hospital in the Gaza Strip shows the brutality of Israel’s crimes. Burnt bodies, babies who are seriously injured, and many children who don’t yet know they have lost their parents.

One of the most heartbreaking scenes was at the hospital a few days ago. A father, screaming from the pain of losing his four–year-old child in an airstrike, said, through bitter tears: “Wake up, my son! Wake up! I brought you a toy!” But the Israeli rocket deprived the little boy from his right to play and grow up normally like other children around the world.

Every night, my four sisters, my brother, my parents and I gather in the living room, watching Israel’s massacres on TV. You can’t imagine the smell from the continual bombardment and the exploding rockets around us.

While I was following the news on social media, I noticed some posts and comments in which people expressed their refusal to evacuate their home in north Gaza as the Israel Defense Forces ordered them to do. This reminds me of a history class in third grade: our teacher told us about our homelands and the Israeli occupation in the 1948 Nakba, the catastrophe.