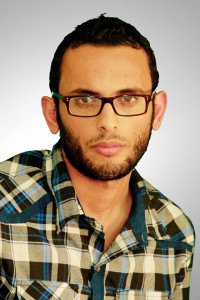 This is the last post written by the Martyr Fakhir Al-Ujouri from north Gaza on his Facebook page before he was blown into pieces. He was targeted by a plane while he doing his job: transporting people’s belongings on his trolley. We all have become targets. All people in Gaza are now targets for the planes and the tanks and the boats that attack everywhere, without exception.

People of the Strip have been living in the shadow of the blockade since Israel imposed it on them in June 2007. Over the years, the conditions have become more severe: the intermittent power supply and the general scarcity of basic provisions that ensure a decent living for any human being are only two of the many restrictions Gazans face each day.

In times of war, these conditions become worse. The Israeli Air Force has been attacking since July 7 in condensed air raids on different parts of the Gaza Strip. Planes attack houses, neighbourhoods; boats shoot rockets at the coast; last Thursday they launched a ground invasion on Gaza City. Nobody knows what shape this war on Gaza will take and what the total losses will be. In two weeks there have more than 700 martyrs, and countless wounded. It’s likely another martyr has fallen while I am writing this report.

Everything is targeted – the people, the houses, the hospitals, the dolls, and it feels like this time the Israeli army’s leaders don’t know what to target anymore, so the target has become the children and the elderly. Gaza has become a city whose streets are full of sad news and sorrow, whose people are burying their families, asking Allah to give them a better life than the one they had before they were martyred. A mother still cries for her son who never had a chance to celebrate the results of his high school exams, which were to take place on July 12, as he became one martyr among many others.

Many children buy lanterns in Ramadan to play with their friends and take part in all the beautiful rituals that come with this holy month. But this year the children of Gaza have stopped using these lamps, because the lamps that are thrown by the planes in the Gaza sky are enough to destroy the children’s joy. They have had to postpone the time for play.