The post-punk grunge rock of Nirvana is not a sound you’d immediately associate with jazz pianist Kyle Shepherd. For many jazz listeners, the very term ‘jazz-rock’ is too enmeshed in the emetic world of 1990s fusion to even merit mention. And Shepherd grew up equally distanced from it, though for different reasons: “It just wasn’t what I grew up with; in my home we listened to classical music and jazz.” (Shepherd’s mother is a violinist who for a time taught at Abdullah Ibrahim’s M7 Academy in Cape Town.) “I never imagined I’d be listening to and composing with rock elements.”

What changed things was extended periods on the road with the other members of his trio: bassist Shane Cooper and drummer Jonno Sweetman. Shepherd has just launched a double album of trio music, Dream State (Sheer Sound), featuring 21 about 40 numbers – according to his count – they’ve developed together. “You talk when you’re on the road – and I really got to understand their musical backgrounds, which were very different from mine: rock and, in Shane’s case, electronica too. For the first time I listened seriously to that music. I became very fond of Nirvana and Radiohead. Leaving aside whatever genre it’s from, it’s just exceptional music.”

As relationships in the trio consolidated, “I started wanting to compose in a way that brought in all our musics, so we could all equally enjoy and be stimulated by what we played, and so we could forge a genuinely group sound.” He cites the new album’s title track: “Rhythmically, harmonically and melodically, Dream State leans towards a rock inspiration.”

That story illustrates everything that’s important about where Shepherd is now.

When he first came to public attention in 2005, after winning the Fine Music Radio composer’s award, he was 17, an introspective and often self-effacing teenager. What then seemed the predictable career path – university studies, time as a sideman, then as a leader, and so on – turned out more surprising. Dissatisfied with the lack of South African and contemporary focus in his UCT music curriculum, he quit, instead seeking mentorship from saxophonist Zim Ngqawana, which he says instilled “a sense of craftsmanship and hard work, and of music as a way of life and spirituality”. By 2009 he’d already released his first solo album, fineART. Now 27, he’s been this year’s Standard Bank Young Artist for jazz, has four albums out (and a fifth solo outing on the way), and has established an international touring career and collaborations that will take him to the Tokyo Jazz Festival in September and New York’s Carnegie Hall in October.

Over the years his playing has grown enormously in command and physicality, and composing is now a central focus. Alongside this, he has expanded a consistent vision about the politics of his music – not just its explicit messages, but how politics are enacted in the relationships between players, as well as between musicians and the industry. ‘Politics’, though, is my term; what Shepherd talks about is where power lies, and how it can be democratised.

He was always a composer, but his early works were most often skeletal themes designed as springboards for jazz improvisation. Now Shepherd says he’s also focusing on larger-scale and more formal works, “including ideas that don’t necessarily call for improv at all”. He doesn’t have a set compositional process, but he does have goals: “I’m concerned with texture rather than with creating spaces for individuals to flaunt their technique. Many of my pieces have a narrative; they don’t need a hundred notes from a soloist and when I’m writing I don’t hear them like that. I’m more concerned with the sound of the group rather than with the ‘leader’ and ‘sidemen’ – although Keith Jarrett pointed out that the sidemen often have the most fun!”

Jarrett is only one of the musicians whose approach Shepherd cites as relevant. The other names are telling: Ibrahim’s later trio works, Esbjörn Svensson, Craig Taborn, Matthew Shipp, and, of course, Vijay Iyer. “Despite his skill, Vijay often chooses not to present as a virtuoso, but rather to offer something new to the format he’s working in, and that’s my goal too – although, if you listen, he also spends time having fun, just grooving.”

The pianist is clear that “bringing something new to the format” is a key vision: “I think – hope – we’re now growing a pool of South African jazz composers who are bringing modern compositional techniques to our heritage, so that when you hear it you can instantly know it’s ours, but also feel that it’s not stagnant.”

While being mentored by Ngqawana, Shepherd slightly regrets he was “so focused on roots. What I maybe didn’t pay enough attention to then was the sense of urgency he had in also transcending those roots.” He’s spending a lot of time working with bassist Carlo Mombelli. “That’s why Carlo is so important to me,” he says. “His music has always been in the future, and I’m in awe of the amount of composing he does.”

Forging a group sound is vital to Shepherd’s compositional vision. “There were times when I felt I’d reached a cul-de-sac,” he reflects, “because working by yourself goes only as far as you alone can imagine. I need the inspiration of the group. And being described as ‘leader’ makes me feel a bit caged in. I don’t want to always have to play the bus driver. In the current trio there are spaces for us all to lead, and at the same time all be sidemen for one another.” Like Iyer, he’s aware that declining the conventional ‘leader’ role often doesn’t fit music industry or media stereotypes: “The kind of establishment jazz has now become only acknowledges players who fit certain kinds of roles as ‘great’ or ‘stars’.”

The group is important for other reasons too. “Much as I need to stretch my hands with a pen these days, I haven’t left jazz improvisation behind. I also still really need that sense of jumping off the cliff that improvisation gives you.” 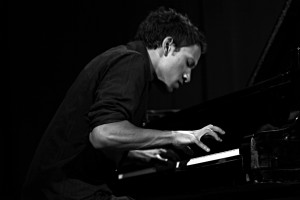 Shepherd uses the word “texture” a lot when talking about his music, and he’s finding contexts beyond the conventional jazz group which offer different ways of exploring that. In Xamissa, the 2013 commission for the Paris Autumn Festival, he was working with a percussion set including goema drums, piano, a mouth bow and four voices, “and in my mind, I envisioned it as an even larger sound”. The singers all had an operatic background, “but they were from Gugulethu, and had worked in the charismatic church vocal tradition. I tried to break barriers and take the voices back to the singing style nonprofessional singers in this country use, which I find extremely moving,” he says.

“There’s a movement in Xamissa called Stray Bullets about township gang violence where I wanted voices improvising in textures. Going back to their vocal roots was new to those singers as a technique for that kind of formally composed piece.” Shepherd’s music, too, constantly harks back to South African roots. The Dream State tracks groove on marabi, mbaqanga and goema patterns alongside their sometimes jagged modern harmonies. “That’s not a deliberate intellectual decision,” he says. “Returning to the roots is simply a part of who I am; sometimes it happens in musically unexpected ways because our jazz is also a part of world jazz.”

One reason Shepherd can now focus on composition is that he understands far more about how the music industry works. He developed that reassuring savvy through solid teamwork during a decade with manager Theo Lawrence. “Theo and I grew together. It was a working partnership where we developed a joint vision for music and the environment where it would be performed. We still spend a lot of time talking about how we’ll arrange things, in South Africa and overseas – and that gets you respect from organisers and promoters,” Shepherd has found.

That’s where the pianist’s restless discontent reappears. Some of the improvised business tactics of his early years – such as organising gigs in schools, churches and living rooms – look with hindsight like precisely the right strategy for another goal: taking music “to the places where it hasn’t been heard, where there is often a fresh openness in audiences”. He still does it: Mark Fransman, Mombelli and Ganesh Geymeier performed in his living room earlier this month.

But Shepherd wishes it wasn’t so necessary. “We need a better circuit for live performance. I like to think a university circuit could work; they have performance spaces, instruments and the core of an interested audience in places where you wouldn’t otherwise find them. We need more festivals – not more mega-events, but little specialist festivals like some I saw in small towns when I toured,” he says.

“Where it all starts,” Shepherd believes, “is with industry professionals who both know the music and have a passion for it. Overseas, I’m sometimes astonished by how well festival producers know their artists and genres, and which audience they are speaking to. There are exceptions in South Africa, but I still know musicians spending a fortune on managers who are useless, and you constantly meet event organisers who don’t get it and just focus on the money. We should be growing more and better arts managers and administrators.”

Shepherd, though, is at a place where he’s happy to deal with sometimes tough domestic conditions because of the buzz he gets from his music. Part of that is down to the trio (and regular guest, peerless reedman Buddy Wells). “I’m now at a point where I’m totally happy just to play with these guys,” he says. “The amount of effort and enthusiasm they put in is incredible – no composer could ask for more. There’s still new material to create and I want to see where it goes, and where we all go with it.” After the stage experience of Xamissa, and before that the Afrikaapse production in Cape Town, he will also soon be working with Cooper on a film score – “an interest in exploring sound textures is practically a requirement there”.

After that – who knows? Shepherd is content to leave the future open. “There’s massive emotional investment and joy in what we’re currently doing. Something is going to come out of that … The train keeps moving.”

Shepherd launched his trio double album Dream State at Wits University on July 26. He will launch the album on August 29th at 20:30 at  the UCT College of Music. After a few pesky problems with pressing, his Japan-recorded solo album is likely to be ready in September