“I wish Israel would destroy all of us, not one of us left,” says Abu Eyad. “Our revolution failed − I don’t want to return to Palestine.”

The young Abu Eyad is speaking from a Palestinian refugee camp called Ain al-Hilweh in Lebanon, where he lives in a state of limbo. Abu Eyad is a central character in director Mahdi Fleifel’s documentary A World Not Ours. In the film he attempts to flee to Europe for a better life. The scene in which he makes this declaration is harrowing cinema.

“The reason I connected so much with Abu Eyad was because he was saying things I was thinking,” says Fleifel while sitting in the lobby of the Elangeni Hotel in Durban. “He was saying, ‘Let’s stop pointing the fingers at Israel’.”

“Yes, the reason we are here is because they were imposed on us, but let’s look at what we have done,” says Fleifel. “Abu Eyad feels betrayed; there is something really honest and truthful about that it and it needed to be talked about and brought to light … My generation has no physical memory of this thing called Palestine; we hear about it and we read about it, but its something that exists in our minds. My grandfather is different. He was 16 when he had to leave Palestine. He had gone to school there and worked the farm. He knows what the land smelt like, felt like, looked like.”

A World Not Ours was handed the best documentary award at the Durban International Film Festival (Diff), which wrapped up last weekend. It originally premiered in Toronto, Canada, in 2012. When Fleifel began shooting the footage that would become A World Not Ours, there were 70 000 Palestinian refugees in the camp. There are now more than 120 00, with many having arrived from Syria.

Fleifel’s father was avid cinematographer in the 1980s. He was always with camera in hand, and Fleifel was able to use a lot of his old footage of the camp.

“I took this footage for granted,”  he says. “It was on old VHS tapes gathering dust, and I had watched them so many times I was bored with them.”

“Then, when we started editing, we realised we could jump back in time and show old footage,” he says.

So Fleifel started trawling through his dad’s archive and discovered some great moments.

“I realised this was wonderful stuff. My father never intended to make films, he just liked to push record on a camera,” he says. “Maybe there was a subconscious need to preserve a record, because not many people know about these camps. I think there may have been a need to keep the memories of this place alive. Maybe there was a purpose to all this that wasn’t apparent at the time − it only becomes clear when you connect the dots.” 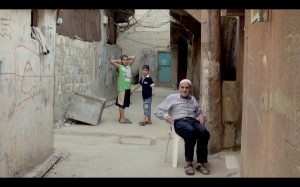 The exploration of these differences between the generations in the camp is exactly what makes A World Not Ours such a great film; it allows you to look at the Israel-Palestine conflict in many different ways that exist outside of the general Judaism-Islam, settler-terrorist binaries used by the media.

“I never saw Palestinians as victims or terrorists,” says Fleifel. “You know these narratives and how the issues are always framed − that was not my experience … I was a refugee in this camp, so my experience as a Palestinian never involved occupation.”

But Fleifel’s return to Ain al-Hilweh is bittersweet as he is confronted with “just another grey refugee camp”, not “the Disney Land of my childhood”.

While the disillusionment and betrayal Abu Eyad feels is omnipresent in the film, there are many funny moments in the daily life in the camp that break the tension and offer some relief.

“They say comedy is tragedy plus time,” says Fleifel. “If you think about it, a decision was made and these people have been living the realities of that decision for 66 years now … It’s absurd, it’s tragic, but, with time, as people try to establish an everyday routine among the power cuts and the water shortages and lack of human rights, it becomes tragic comedy.”

The conversation steers towards the current conflict in Gaza.

“With this particular conflict, it’s always there,” says Fleifel. “It just happens to be intensified at the moment. I wish it wasn’t, but if my film can bring some understanding to ideas around Palestine, then great,” he says. “What is important is that we see Palestinians outside of the stereotypes and clichés that are always used − we can do better than that.”

But there will always be resistance to any attempt to portray Palestinians outside of this stereotype.

Fleifel, whose family now lives in Copenhagen, Denmark, says his film was due to be broadcast on television 10 days ago in Denmark and it was canceled at the last minute.

“I have a good intuition about these things and this is not the kind of film you want to be showing with what’s going on in Gaza right now,” he says. “The Western media are really struggling to keep justifying what Israel is doing, and so you can’t show a film like mine that portrays Palestinians as human beings whom you care about.” 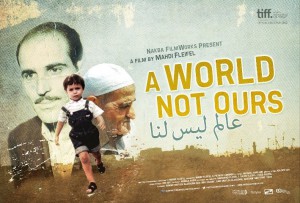 The conversation steers back to the making of the film.

“That whole summer was so fast,” says Fleifel. “I wanted to make a short documentary about the World Cup in Ain al-Hilweh in order to finance the fiction film that I wanted to make, which was to be set in the camp. I was always filming and Abu Eyad was my fixer, always by my side, and so I would turn the camera on him and he would talk and then one day, all of a sudden, he was like, ‘I’m leaving’.”

The moment in the film when Abu Eyad announces his decision is fraught with tension.

“I started to question whether I had provoked this rash decision by Abu Eyad by poking at things,” says Fleifel. “Your presence as a documentary filmmaker is never innocent − he knows he is being recorded, he knows he is on camera, he knows it’s on record.”

“Then, when I was back in Europe, I was watching the footage and I was like, ‘Okay, maybe this is not a documentary about the World Cup’. I thought I was doing research, collecting material, and then I realised that the characters I was looking for in my fiction story were already there − they were more alive and more charismatic than I could achieve in fiction.”

Abu Eyad manages to make it to Athens, but right near the end of A World Not Ours he is deported back to Ain al-Hilweh. It’s sad moment, with Abu Eyad facing a bleak future. Fleifel tells me that Abu Eyad is currently in Berlin. I am relieved to hear he is out the camp.

“When the film was finished, I felt that I had to try to help him in a way,” says Fleifel. “So when the opportunity came to screen the film in Berlin, I invited him to Berlin to present the film and he decided to stay and seek asylum there.”

“You should have seen the reaction in Berlin when he turned up at the screening − it was like chairs flying everywhere,” he says animatedly.

“I don’t want to portray too much of a happy picture,” he says, “because he is still waiting in the system in Berlin, but the difference is in Berlin he is waiting with a potential payoff − in the camp he was waiting for nothing.”

At this point Fleifel has to leave to take a phone call. I still have more questions, so we agree to head down to the Gaza solidarity march in Durban city the following day.

On Friday July 25 I pick up Fleifel and we park the car near the Durban City Hall. We begin briskly walking along the route towards the march. We are late.

We reach the rest of the protesters near the bottom of Dr Pixley Kaseme Street. A young photographer says there are more than 5 000 protesters; a local policeman estimates closer to 10 000. 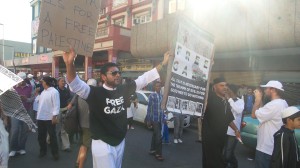 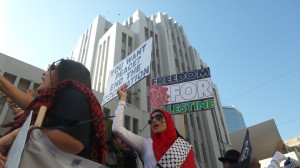 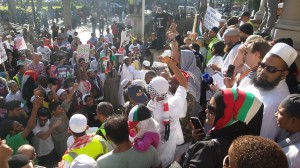 As we merge with the protesters we begin chatting about Omar, another Palestinian film at Diff, made by filmmaker Hany Abu-Assad.

Omar is a political thriller set in the West Bank. It was nominated for the 2014 foreign language Oscar.

The Academy has always had problems with Palestinian films; Elia Suleiman’s Divine Intervention in 2002 was refused nomination as it ruled Palestine was not a nation.

But Omar was filed under “Palestine”, which pleases Fleifel. “I am glad [Abu-Assad] fought for that,” he says.

Yet the Diff filed the film under “Palestinian territories”. Fleifel says he will talk to the festival’s powers that be about that. 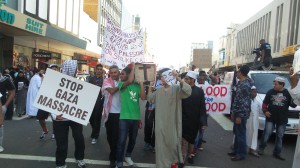 Walking among the chanting protesters, we notice one who has taken umbrage with a coffin that four other protesters are carrying. He walks up to them and begins to tell them that the coffin should not be there. We edge closer.

His problem, it seems, is that there is a cross painted on the head of the coffin. He begins to push the coffin and the young boys holding it up.

“Not every Palestinian who dies in Gaza is a Muslim,” the young boy responds to the bullying protester.

The angry protester is agitated and an elder man calls him “comrade” and tries to calm him down.

“We are all here for the same reason,” he says.

I think back to my conversation with Fleifel the previous day and how there are multiple truths to this land called Palestine, and how so many are trying to impose their truth as the empirical one.

But one thing that unites everyone at this march is that they all know that what Israel is doing in Gaza is criminal.

“There is no doubt that Israel is an apartheid state,” Fleifel says. “Are we even debating that?” I reply.

Fleifel says that since he has arrived in Durban, the response from South Africans has been very positive.

“Everyone finds out that I am Palestinian and they immediately want to know what is going on in Gaza and how they can help,” he says. “It don’t think it’s just because they like Palestinians − I don’t even think Palestinians like Palestinians. But no matter how you look at it, this is a just cause. We were robbed in broad daylight,” he says.

“I think some Icelandic writer once wrote, ‘What you have stolen can never really be yours’, and I genuinely believe that.”

Pic Credits: Stills from A World Not Ours