“Zuko Spencer-O’Malley is dead. Dead via suicide. At the tender age of 13.”

These are the opening sentences of Zukiswa Wanner’s new novel, London – Cape Town – Joburg. Although Wanner’s novel tells the story of Zuko’s tragic and untimely death, its pages are mostly filled with the musings, adventures and feelings of his parents, Germaine Spencer and Martin O’Malley.

The two meet in a London nightclub. What follows is a whirlwind romance, and within a few months they are married and living together. Germaine and Martin decide to move to South Africa, living first in Cape Town, then Joburg (the title is a handy clue), and it is their experiences in both these cities that inform the bulk of the novel. By naming each section of the book after the cities in which Germaine, Martin and Zuko find themselves, is Wanner tethering certain experiences to certain cities? Or is the conjunction of events and cities (such as Martin and Germaine’s romance in London, or Zuko’s suicide in Joburg) a narrative coincidence? If not, what is Wanner implicitly saying about each of these cities? 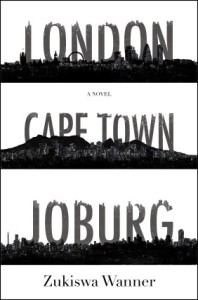 It is impossible not to draw parallels between Martin and Germaine’s relationship and the advent of democracy in South Africa. Martin is ostensibly black (seemingly only when it suits him, such as in BEE-driven corporate South Africa); Germaine is white. They meet and marry in 1994, and move to South Africa four years later. They represent a literal union of black and white, the picture of reconciliation and, with the birth of Zuko, the poster-perfect ‘rainbow nation’ family.

Germaine gains international renown as a ceramicist; Martin achieves success as an investment banker. Through Martin’s step-brother, Liam, they are connected to high officials in the “party” (a Big Brother-like presence in South Africa, by Liam’s account). From the outside, their life seems perfect. Part of Wanner’s storytelling genius is unravelling this supposed perfection thread by thread. Zuko’s suicide, introduced as it is at the beginning of the novel, is the thread that, once removed, you discover to have been holding everything else together.

Wanner speaks in all three of their voices, using each character to expose us to new information about all the others. Martin tells us about Germaine’s often strained relationship with her mother. It is Germaine who tells us what a loving and affectionate child Zuko is. And Zuko, more than anyone else, gives us a glimpse into the enigmatic figure of his “comrade uncle” Liam. Wanner’s truest voice is Zuko’s: one feels she is a little uncertain writing about Germaine and her art, or about Martin and his career in banking, but with Zuko she has found her niche. Zuko speaks to us for the first time on page 238 of this 338-page novel, and it is a shame that we are exposed to his voice for only a few journal entries.

The novel ends with one of Zuko’s moving and honest journal entries, the last one he writes before he takes his own life on the day before his birthday. Knowing what we do about Germaine and Martin, and having been exposed to some of the effects of Zuko’s suicide on their marriage, we cannot help but wonder what the future holds for the romance that has, with us in tow, traversed two continents and three cities. Whatever your answer, London – Cape Town – Joburg remains a memorable read.

Saneze is a passionate literature student. Or, to put it more accurately, a full-time struggling writer with no job prospects. In her spare time, she chooses to be politely boggled by computers. Cheese and carbohydrates she counts as her best friends. Will work for wine. View all posts by Saneze Tshayana →