This episode in The Con’s Stories from the Strip series is written by Mohammed Alshaikh Yousef. Yousef is 26 and was born and raised in Gaza. He left the Strip after the last war in 2012 and now lives in Doha where he is studying towards an MA. As an activist he believes for now he can serve Gaza more from outside its borders than inside. While still in Gaza he used to co-ordinate cultural events and trained children in creative writing. 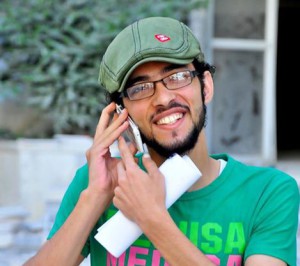 All I remember from the 2012 Israeli aggression are the words of my little sister Assoom, after the ceasefire agreement was reached: “I’ve set the alarm for 9 o’clock. As soon as it rings, the war will be over.”

Assoom hates the alarm clock; she hits snooze every morning to sleep an extra five minutes before school. But that time the thing Assoom most looked forward to was for it to ring so she could silence it and have a life to live again.

This is the fourth war in the past 10 years, and Assoom isn’t yet 12. She tells me: “I am not scared anyway, and even if we felt some fear, people are dying and we aren’t better than anyone else.”

And so you are deprived of your right to be afraid. What does it mean to fear when others are chopped up and strewn along streets, scattered across walls, when others have lost an arm or a leg or both? How can you fear when your body and family are still intact? And so you are obliged to hide your fear, because it is not fitting.

And yet, we fear. We feel terror, even.

Terror is when seven-year-old Barhoom needs to be accompanied to the bathroom by other family members so he can feel safe; when you use earplugs to shut out the noise of the drones for 10 minutes so you can sleep until the next blast wakes you; when you keep the windows open so glass shrapnel doesn’t hit you; when everyone is huddled around the TV to watch what is happening to them, and the father gives up some of his authority by saying, “Smoke here, just don’t stand at the window”.

Terror is when calm unsettles you, because it always precedes the storm

Terror is when you count possibilities as you hear a missile pass over your home: our home, my neighbour, my uncle, my sister, my love; an empty plot of land – thank God!

It’s when you run down the stairwell without any shoes on, and run and run with legs like bamboo punctured and bloody until the echo subsides, and you look around you and find yourself alone; your family having scattered in all directions as they ran.

You are alone, standing and waiting to meet them, either in front of God or on the sidewalk. Alone and barefoot, running for your lifeTerror is when the best meaning of the word “okay” is that you are still alive, and waiting.

And then, suddenly, you start making concessions: let them bomb the house while we’re not in it; at least give us a warning; a shallow wound, no amputation needed; let only part of our home be destroyed; that you at least take your identifying documents; that none of the children wets themselves as you run, you all want to appear strong in front of everybody else; that you find a place to sleep; if you die, that you all die together, that you are not left alone without them.

Assoom, my love, tomorrow the alarm clock will ring again and the war will be over, but don’t ask who these empty seats belong to.