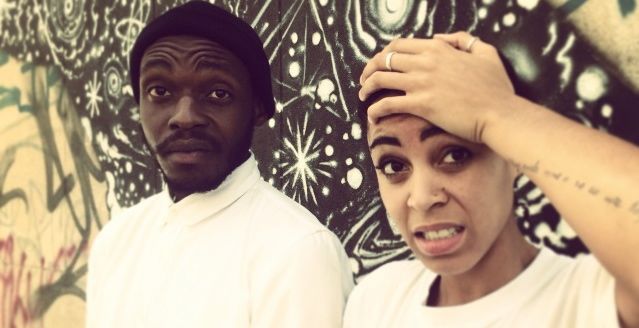 In a world hurtling forwards, 8 Bars Short is a renegade band whose music forces you to slow down, listen, take it all in. Their fusion of Afro-soul, indigenous folk, indie and jazz is a move towards a place where quality, not pace, matters most. The pair, Itai Hakim and Pelonomi Moiloa, demonstrate an intention and a sensitivity to their music that isn’t typical in what passes for songwriting these days. Theirs aren’t the type of songs that are in the top 40 radio charts, but they are honest, meaningful and true to their creators.

“Being mixed-race is who I am, so who I am comes through in the music. It’s always inspiring what I write – my views on the world, the way I was brought up. It’s how I approach things and how I interact with people,” Moiloa says.

Hakim and Moiloa both come from mixed-heritage families. Hakim is part moTsonga and part moVenda, and Moiloa is part black and part white. The song Kombela, which Hakim wrote in xiTsonga, is about searching for one’s roots with the help of your elders. It is a plea for their assistance in finding those roots.

“Being able to express yourself in the way that you’re most comfortable is important, because I feel like when you say something, it’s sincere – there’s a particular feeling behind it,” Hakim says. “But it’s also a challenge to start writing and singing in Tsonga and Venda, because I can speak it, but actually writing it…”

Part of their creative journey means collaborating, on some level, with their parents. To that end Hakim’s parents and grandparents lend their support and knowledge for some of his folk-themed songs, which also teaches him about their cultures.

The song Kombela is one such song. The first verse and chorus go:

In English it means, “We will build our own path, we want to know what has come before us, but our grandparents are gone and our parents do not know,” and, pleadingly, “We are asking to know where we come from”.

The song also shows off their guitar skills and vocal ability, and it flows as freely as their chemistry does.

Like siblings, Hakim and Moiloa tease each other constantly. They complete each other’s thoughts and add to what the other is trying to articulate, demonstrating an ease and a chemistry that reflects in their music.

Moiloa says their chemistry came easily, and from the beginning the pair had what she calls “an automatic click”.

Hakim agrees. “I think it makes sense musically as well. I was listening to Astronauts and Caged Bird and stuff yesterday. These are songs I wrote, but Nomi, the way she sang on it, she just knows how to play with the music.” He says Moiloa takes no vocal direction from him – she just has a rare approach to songs, he says.

Although they both sing and play guitar, each has their preference. Hakim prefers the strings, whereas Moiloa prefers vocals, but each pushes the other to venture out of their comfort zone, which, they say, is making their sound evolve and grow.

Other than their forthcoming untitled single, they don’t have any plans to release music commercially, and for now are concentrating only on the live-music circuit and some small gigs. Moiloa is quick to add that although a single is normally followed by an album, they don’t feel pressure to shift their focus to put out music just to stay “relevant”.

“We’re not there yet, to be frank,” Hakim says. “We really want to try out the live circuit a little bit more – develop a proper repertoire for our music kind of thing.”

“And also not be pressured to put something out when it’s not ready,” Moiloa says.

She believes that worse than no album is an album filled with tracks that are poorly written, or are just thinly veiled remixes of the first six tracks on the album.

“It must be good, it must be up to our standard,” she says.

“She’s more picky than I am,” Hakim adds with a chuckle. “But we’re both very particular about how things sound and when to introduce things. We do have other songs and stuff that aren’t on SoundCloud, but we won’t perform those songs because we don’t feel like…”

“We’re not ready and audience isn’t ready so…” Moiloa chips in.

“Spit it out just ’cause we want to fill the space or whatever.”

It’s the kind of story that’s becoming increasingly common in the digital age: musical hopefuls, keen to share their music, grow their support base or sign a recording contract post their music on an online music platform. If they are lucky they will be ‘discovered’ by a major label eager to help them with one or all three of those options.

This was the case for 8 Bars Short, who became a duo after a band they were members of, No Idea, fell apart. The two had a bond, so when the other members of No Idea didn’t make it to a gig one day, the pair played anyway. Soon after that they headed to a friend’s studio and recorded some tracks to post on SoundCloud. It worked, because Motif Records, rapper Tumi Molekane’s boutique record label and artist management agency, discovered their tracks on the platform and took an interest in their music.

“We were quite new and they just happened to stumble upon us before other people did,” Moiloa says. “We were introduced to the idea of Motif as a management agency, not so much as a record deal sort of thing. It felt like a more human connection and it wasn’t just about business – it was more about making good music.”

“And caring about the music as well,” Hakim chips in, “was really important for us.”

And the care they have for their craft speaks to their care for their heritage – to know it, celebrate it and honour it.