Songeziwe Mahlangu was born in 1985 in the Eastern Cape. He is known among his friends as man of few words, but with a pen he is anything but. He works and lives in Johannesburg. Last year Mahlangu published Penumbra, his critically acclaimed debut novel, which was shortlisted for this year’s Sunday Times Literary Award. It is a tale about mental illness, solitude and the budding middle class in Cape Town, which the author says is his favourite city in South Africa. He wrote the novel while doing a creative writing programme at Rhodes University in 2012. 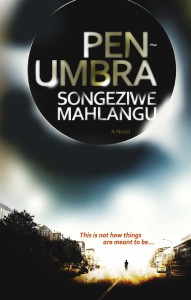 You’ve said that writing Penumbra felt like you were letting out something, scratching an itch. Can you share more on that?

It’s an itch I’ve always had. I’ve wanted to be a writer since high school, so it’s something that’s always been there.

Penumbra is your first published work, but you have been writing for much longer. Did you try publishing it in parts?

Before Penumbra it was mostly poetry, a few attempts at short stories here and there. I tried publishing the poetry, probably back in 2010, I think, in some journals. They were rejected. But Penumbra was quite easy to get published.

And it was a one-book contract?

Yes, it was just for one book.

Not because you aren’t planning on producing any more work?

I would like to write as soon as I have enough time for it. And then again it will depend on whether there are any publishers interested in publishing the work.

So there is a work in mind?

Yes, I have some ideas; it’s just a matter of time. It is especially difficult for me because I prefer writing in the morning until the afternoon and then maybe wrap it up for the day. In that time, I try to push it up to only about 500 words. The reason I write so little is because I write very slowly. I go over my words a lot. Time is important. I think the pace of the sentences comes through my writing of poetry, which slipped into my prose writing.

Will you eventually publish poetry?

I would like to write some poetry, I won’t lie. Publishers aren’t always willing to publish poetry. It doesn’t fare well in South Africa. But there are some independent publishers. One of my creative writing lecturers ran a publishing house. Maybe I will send some stuff over to him as soon as I have enough material. Poetry is special to me, unlike novels.

Why are novels different for you?

I find coming up with an interesting plot very difficult, but writing verse is not as challenging. I’m not that kind of writer who focuses on plot-driven stories.

What helps you with this challenge? Does reading certain writers or plots help with the process?

People I have been reading … I don’t know if they have informed my writing that much, but there’s probably a lot of Zakes Mda, Dambudzo Marechera and Sello K Duiker. I also really like Charles Dickens, Thomas Hardy and those kinds of people. But with poetry, it is very much informed by Rainer Maria Rilke and César Abraham Vallejo. I also like reading Can Temba’s short stories, and E’skia Mphahlele’s Down Second Avenue – it was, and has always been, for me, about the way they have with words, and it has never been about the topic. I don’t think with Penumbra I was searching for a topic. With Penumbra, lots of it was based on my life – it was semi-autobiographical, so it was easy coming up with a plot. But with future work I would like to touch on social subjects.

What kinds of social issues?

Things that make an impression on me. I’m really moved by the economic conditions in the country – just young people getting out of varsity and struggling to find jobs, and the corruption we encounter daily.

Some writers would mention issues of race…

I’m not really into race, to be honest. I suppose I just don’t think about it that much. Maybe I have other preoccupations.

Have these preoccupations ever changed?

When I wanted to write, I just thought it was an interesting thing, but as I moved and encountered different situations those did inform me. But I want to be honest. I want to write things that are personal to me, that are important to me, and not just something I think will be popular. Besides, very few people are making a living from writing in South Africa, so, if I’m going to do it, I’m at least going to make it honest.

Are you saying that the prospects of making little to no money from writing in South Africa will create more honest novels?

I can’t really imagine how different it would be if I were doing it for a living and thinking, ‘What can I write? What’s going to entertain people and become popular?’ At some point I would really love to become a fulltime writer. It’s just that it’s really difficult writing in South Africa. What I have to do is to work with the situation I’m in. I can’t really make a lot of money with it, but I can still cry through my art and be honest with myself and with my readers.

What about writers who are writing for a living? How honest can such writers be?

I like writers like JM Coetzee. (I don’t know how long he’s been doing this, how long he has been a writer, but as far as I know he used to teach at UCT. I also hear he sold his journal in Australia, and made millions.) I really enjoy reading him. I recently read his book The Childhood of Jesus. I find it really unconventional and challenging. Reading his work, you can pick up that he is not writing as someone who is just trying to sell.

If writers are able to – I can speak only for myself – come up with book after book and get paid, then that’s good for them. I’m just working with the reality that is – if you go out there [publishers] will print 1 500 copies of your book, so there is not that much money you can make. If my art touches just one person, then that’s fine.

Penumbra is published by Quell