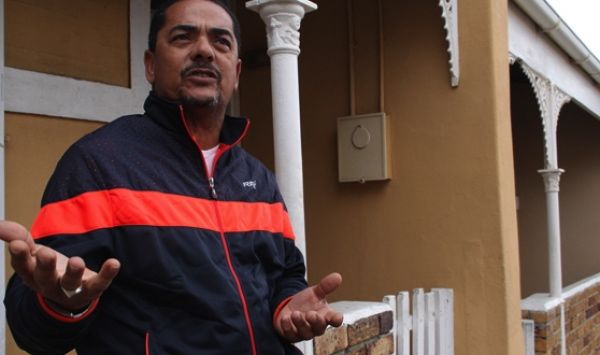 The owners of the cottages, the Holy Cross Sisters, claim that it is an open and shut case: the convent has a right to sell its property to the highest bidder. But the tenants see it as a betrayal by the church to which their families have given a lifetime of devotion and service.

“As a child I slaved in that church,” says Sean Savage, who represents the tenants in their struggle against the convent’s plans to evict them.

“I would scrub the floors until my hands were raw. Our families’ lives and the life of the church were one. The convent’s support protected us from being evicted during apartheid. The nuns were seen to be close to God, they walked on water, they were untouchable. Now, the new sisters act like a bunch of hoodlums – lying and conspiring to put us out on the street. This is not the Catholic way.”

The cottages were bought by the family of a nun as an asset for the convent in the 1920s, said Savage. Savage’s grandparents, Guillerm and Maybell Dias, moved into one of the six cottages in 1928. Dias, a Portuguese fisherman who had repatriated from Cape Verde to District 6 in the late 1800s, was a staunch Catholic.

In 1957, Dias’s daughter moved into a different cottage with her Irish husband (whom she married in Mozambique because of South Africa’s race laws) and one-year-old son Sean.

Savage told GroundUp of “a tough life”. He became estranged from the church and his family in his late teens. He took to a life of crime — robbing and using drugs — knocking on death’s door more than once. He has lain bleeding to death from a stab wound on a street corner. He lost faith in God and became suicidal. Sitting on his bed with a cocked gun to his head one night, it was a fortuitous ring on the doorbell at 3am that saved him from pulling the trigger. That was a turning point, and he found God again.

In his middle age, his wife left him to raise their three children alone. In 2001, he returned home to Searle Street to care for his ailing aunt and mother. Both have since passed away, and Savage took over their rent – planning to grow old in his childhood home.

Since 2011, Savage has been at loggerheads with the convent’s newly elected board under Sister Loretta Oliphant. Under the auspices of formalising the verbal lease agreement that the tenants have had with the convent, the board suggested that a lease contract be signed. The contract was however for short-term lease, and non-renewable.

Savage claims that his efforts at raising the tenants’ plight with Cape Town’s Archbishop Stephen Brislin came to naught, until, in his frustration, he threatened to expose a high ranking priest for gross wrongdoing. Now Savage sees himself to be on a righteous campaign against a corrupt and hypocritical church which is “leading its flock to the slaughter”.

“What breaks our heart is that the sisters tried to do this in an underhand way, instead of coming to speak to us,” Savage said.

“We are not asking for a handout. Why did they not offer the property to us to buy at a fair price? Why do I have to stumble upon an advertisement online where I see my own home for sale?”

A fair price, says Savage, would take the financial situation of the tenants into account. Also, the fact that the tenants maintained, painted and renovated the cottages.

However, the tenants have paid rents well below market value. They are therefore unlikely to find anything similar for what they are currently paying should they be evicted.

Janet Bowers is 70. She has lived in one of the cottages for 40 years. She says that she and her mother before her have painted the house a total of seven times and at their own expense. Now, with an uncertain future, Bowers says she is not willing to invest any further.

“My house is dilapidated. The paint is peeling off the walls and there are leaks in the roof. But, I don’t know if I will still be here next year. So, I am not willing to fix anything. Maybe I will need that money, if they evict me,” she said.

“District 6 is my home. It has always been my home. I was born in Lock Street. I played here with all the other children. And, even as they were removed to the Cape Flats my mom and I always had a place here. It was by the grace of those nuns. Now, the nuns are the ones who want to deprive us.”

Both Oliphant and Brislin declined to comment when approached by GroundUp. The convent’s lawyer, Noleen Leach, merely confirmed that the property was on sale via Rawsons Property Group.