Nat Nakasa, as a writer who came up during the Drum era, was unremarkable.

Sure, he could write some things. First for Drum magazine, then for a literary magazine he founded called The Classic. He was the first black columnist for the Rand Daily Mail (which later became the Mail & Guardian), and after leaving South Africa did some assignments for the New York Times.

His skill as a writer was overshadowed by the fact that, at the age of 21 when he arrived in Johannesburg from Durban to write for Drum, he shared a newsroom with the likes of Can Themba, Mongane Wally Serote, Bloke Modisane, Todd Matshikiza and Lewis Nkosi, who were already great writers.

Nakasa’s understated and subtly ironic writing style was nurtured in this newsroom during the late 50s, when the apartheid government was already going out of its way to tighten the screws on a system that would eventually prove unsustainable. 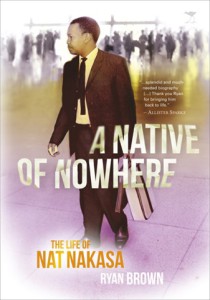 As his biographer, Ryan Brown, put it in the introduction to A Native of Nowhere:

“He [Nakasa] was making a slow slog through his life slinging together sentences and fleecing police and sneaking kisses with white girls from the suburbs, and then, quite suddenly, he was not.”

She continues: “That isn’t the story of a martyr. Nat didn’t suffer the most of any South African who went into exile – he wasn’t a tortured literary genius, he never went to jail for his beliefs or watched his family be killed.  His life can’t be made into a symbol of the great path of human destruction apartheid cut through black South Africa.”

But how, then, did it happen that Nakasa ended up as one of the most celebrated writers from the Drum era?

Former president Thabo Mbeki bestowed Nakasa with the Order of Ikhamanga for his outstanding contribution to the country’s cultural life.

The South African National Editors’ Forum (Sanef) named one of its top honours the Nat Nakasa Award for Media Integrity.

And recently, 50 years after he was buried in New York a few feet from the graves of Malcolm X and James Baldwin, Nakasa’s remains were repatriated back to South Africa, where they are to be buried in Durban this month.

But it is maybe because Nakasa lived such an unremarkable life during a time of such turmoil, both personal and political, that he is to be celebrated.

Or, as Brown put it, “perhaps that is what makes his story all the more worth telling. It stands for nothing but itself.”

Only a few people will rise up to the level of Steve Biko, Robert Sobukwe or any of the anti-apartheid activists who gave up everything for the freedom we now enjoy.

Most South Africans lived unremarkable lives within the system of oppression just trying to make it to the next day. People like Nakasa, who was born on May 12 1937 and grew up in the Cato Manor in Durban before moving to Joburg, after a short stint at a local newspaper, to go work at Drum.

By the time he arrived at Drum in 1958, at the age of 21, Nakasa was thrust into a world seldom seen in apartheid South Africa where black people were working side by side with their white colleagues and earning a living wage.

At the time, Drum was selling about 240 000 copies with each issue, and the magazine was circulated as far as Kenya, Ghana, Nigeria and Sierra Leone.

Besides churning out stories at Drum, young Nakasa was also thrust into multiracial life in Sophiatown and other Joburg suburbs where he became friends with the late Nadine Gordimer, among others.

He became a member of a “fringe country” Ryan describes as “a social no-man’s land, where energetic, defiant young people of all races live and play together as humans … educated, uninhibited and relentlessly clever, the men and women of fringe country chose to challenge apartheid not through overt protests, but simply by refusing to let it dictate their daily social and intellectual pursuits”.

By the time Nakasa moved to Joburg, the apartheid government had started bulldozing Sophiatown, a place his colleague Modisane described as having taken “the ugliness of life in a slum and wove a kind of beauty”.

At 24, he started a literary magazine called The Classic (named after a bar he and his friends used to frequent) where he showcased the work of writers, poets and novelists of that time.

The Classic was founded through the help of an American, Jack Thompson, whom Nakasa befriended in fringe country.

Thompson ran an organisation called the Farfield Foundation, which, unbeknownst to Nakasa, was bankrolled by the CIA as part of its global effort to stop the spread of communism.

As apartheid continued to wreak havoc on the lives of black people through the passing of laws that further prohibited their movement within the country, many writers began to emigrate.

By the time the Rand Daily Mail began looking for a black columnist, Nakasa was there to take up the opportunity, as most of his fellow writers had already left the country.

When it was time for him to leave South Africa, on an exit visa, never to return, Nakasa wrote wryly to Rand Daily Mail readers: “What this means is that self-confessed Europeans are in a position to declare me, an African, a prohibited immigrant on African soil. Nothing intrigues me more.”

He made few friends at his university, but found his political voice and became radical, participating in anti-apartheid marches on campus and speaking about life in apartheid South Africa at rallies.

He even alluded to his previous life in fringe country in a speech when he said “South Africans [were] too concerned about having a good time and getting along to effectively challenge the state”.

He worked on a few assignments for the New York Times, which sent him to Harlem and later to Alabama, where he experienced the lives of black people in America.

He had been in the United States for only 10 months, depressed, stateless and broke, when he jumped out of the seventh-floor window of Thompson’s apartment to his death. He was 28.

So maybe Nakasa’s like is remarkable in its simplicity. He was a guy who was trying to make something of himself in a system that was so cruel it eventually broke him.

Maybe the remarkable thing about Nakasa’s life is not that he was banned, jailed or tortured. Maybe his life was remarkable because somewhere in the madness of apartheid he remained a wildly optimistic young man who started a literary publication when none existed for black writers; who refused to be confined to a life in the township and carried on mixing with people across the colour bar.