Sax player McCoy Mrubata was a young lion on the Joburg jazz scene for so long it’s hard for some of us to acknowledge our own grey hairs in the reality that he is now an elder statesman. But it’s less difficult for him: “After so many years on the road, I’m getting comfortable in a new role − mentoring, creating opportunities for younger players, getting invited to conduct youth bands. In today’s world, their CVs need to grow quickly.”

That’s one of the motivations behind Mrubata’s Brasskap Sessions recording series, of which Volume Two – after a five-year gap – has just appeared. “I started Brasskap to involve freshmen: to get them used to the studio, and to interacting with senior players and others in the industry,” Mrubata says. 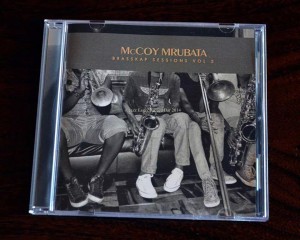 Mrubata’s own story illustrates the benefits of mentorship. Born in 1959 in Cape Town, the reedman – who plays tenor, alto, soprano, flute and more – reflects that he started learning music simply by eavesdropping on Langa dance band the Merry Macs, which rehearsed opposite his childhood home.

But that’s only half the story. The other aim of the Brasskap Sessions project is to revisit South Africa’s historic music styles through modern jazz ears. For Volume Two, that means the mbaqanga of the Soul Brothers. Exploring that put Mrubata temporarily back into the role of mentee, sitting metaphorically at the feet of Soul Brothers keyboard legend Moses Ngwenya – “Black Moses”.

Mrubata, who still takes on the role of session man from time to time, played in a Soul Brothers horn line on an album seven years. But his affection for the music has much deeper roots. “Even if we play in different styles,” he says, “I can say that all of us who grew up in the ’60s and ’70s have long been his fans. He pioneered his own style. Even today you can instantly identify who that music came from.”

But it was an enthusiastic fan of both modern jazz and mbaqanga, Sifiso Falala, who first mooted the idea of a more deliberate collaboration between the two players, and volunteered for the role of patron. “Sifiso’s a businessman who loves music,” explains Mrubata. “Although I had been his session man, I’d never spent time with Black Moses. Sifiso opened the doors.”

In 2011, when Mrubata and friends first visited Ngwenya’s home studio, there was instant human chemistry – “Bra Moses is a lovely person; soft-spoken, humble” – but the musical fusion took a bit longer. “I can admit now that, from the outside, the music might sound easy, but those rhythms were hard for me. Intricate. Not easy at all!”

The first result was the 2012 album Mbaqanga Jazz (Black Moses Records), which featured eight tracks from Ngwenya and two from Mrubata, and musicians from both players’ crews, including Paul Hanmer on piano, Spanish Motsoeneng on bass and veteran Ntokozo Zungu (ex-Stimela) on guitar. “But the idea was not to take it outside what Bra Moses had created. We treated his tunes the way smooth jazz players treat the standards. We opened the structure out to make some jazzy spaces for soloing, but we respected the original style and his approach as the composer.”

However, Mbaqanga Jazz got Mrubata thinking about how that music (and a few associated styles) could be opened out even further and “what would happen if you really let them breathe”. In that sense, he says “Brasskap Volume Two has been in the making for three years. There was growth for all of us sitting with Black Moses and seeing how they do things and think through tunes. If you’re open-minded – and I am – you can’t help but expand your own thinking in that kind of collaboration. We speak 11 languages in this country – as well as all the unofficial ones – and I don’t see why we can’t all speak in as many musical languages too.”

Brasskap Volume Two draws its inspiration not only from mbaqanga but from the modern jazzmen of an earlier era who created across genres. The track Raw Materializm, for example, features an impressive extended solo from Billy Monama, who learned his craft from legend Themba Mokoena, “so it’s a tribute to Themba and also, in the Pedi vamp of the last section, to Philip Tabane, too”.

Monama is only one of the old and new friends who appear on the album. Other artists include guitarists Erik Paliani and Louis Mhlanga; trumpeters Feya Faku and Prince Lengoasa and trombonist Jabu Magubane; pianists Paul Hanmer, Luyanda Madope and Johan Mthethwa; bassists Herbie Tsoaeli, Peter Sklair and Benjamin Jephta; and more besides.

“It took me years to assemble enough resources to feature those big line-ups on albums. Whenever I had enough cash, I’d call people. But if I can afford a fat line-up, why not? And on this album, I’m still working on covering all the costs,” he concedes ruefully. Money wasn’t the only issue. Brasskap Volume Two is also self-produced and self-distributed – “and I’m still seeing ways I could do it better and learning for next time. But now I am truly in awe of musicians like [bassist] Concord [Nkabinde] who do this themselves for all their albums.”

In line with the project’s goals, Mrubata employed a younger musician, Luyanda Madope, as producer as well as keyboard player: “I thought: he’s got those studio skills and, like me, he steers away from overproduced stuff, which I really don’t like.” Then there’s saxophonist Sisonke Xonti: “When I first heard him in Grahamstown, I thought it had to be someone older. I just couldn’t put a young face to that sound, which feels as if it could be from the Eric Nomvete era.”

The result is a dozen tracks including classic big-city mbaqanga, the big brass front-line sound of African jazz, roots Eastern Cape modernism, and ’70s Afro-soul, all of them informed by a distinctly contemporary vision. The Afro-soul track Hoza Mntanakamama may point towards Brasskap Volume Three, because Mrubata admits: “I’m a real fan of those authentic radical Afro sounds – Fela, Thomas Mapfumo, that era – and doing an album in tribute to those is a dream.”

Next up as a formal release, however, is a 2001 recording of compositions that later found their way into the album Face the Music – but in their original incarnations, cut in Norway with Scandinavian co-players. “It’s the same melodies but with a very different feel, which I think listeners will enjoy,” says the saxophonist.

Mrubata continues to record and gig, even as his new life as a teacher and inspirer of younger players blossoms. “I will never not play at all,” he says, “but my absolute passion now is for seeing the young guys on stage, and helping them get there.”