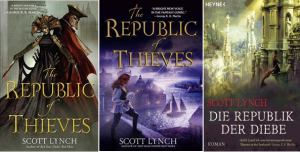 There was a long gap before this, the third instalment of Scott Lynch’s Gentlemen Bastards fantasy series, interrupted by a series of personal crises for the author. It is the book where, via flashbacks, we finally meet trickster hero Locke Lamora’s mysterious lost love, the equally smart, tough and devious Sabetha. The publishers have hyped it as “his most exciting novel yet”; the genre blogosphere has, in general, taken a contrary view. (For fans, seven years’ waiting will do that.)

Neither view is wholly justified. In some ways, this is Lynch’s best book yet: his writing has grown immensely in perception and nuance. Protagonists Locke and Jean finally escape the Fafhrd and the Gray Mouser stereotypes (wily hero; grumpy lump of a sidekick). Even the walk-on characters are better developed.

Lynch crafts a clever plot device, using a play within the novel to reflect and distort the historical past, the current stratagems – they’re rigging an election – and possibly the future trajectories of the lead characters. That makes the book a great deal more literary and slows the pace, which may be what the fans didn’t like.

But there are also weaknesses. The most important plot reveal is accomplished through an info-dump from the series’ dei ex machina, the Bondsmagi: a device that always feels like a writer’s last resort. The trickery around the election is repetitive and padded. That becomes more understandable when seen in terms of the series’ narrative arc.

Although third of a planned seven volumes, this is essentially the middle book: the transition between a picaresque tale of likeable con-men, and a much bigger, darker epic of ancient enmities, magic and revenge. Lynch pulls it off respectably, but it would have worked far better had publishers not been greedily stretching the series, as seems fashionable, into as many books as possible.