As the celebration of Shifty September draws to a close this week, The Con’s Relebone Myambo take a look at some more recent mobile recording studios on the African continent.

Music is a great expression of culture, a handy way of documenting evolving lifestyles and the zeitgeist of an era. In parts of East and Southern Africa where recording resources are scarce, two mobile recording studio projects are collaborating with local artists to share these musical expressions with the world. On the one hand, the Santuri Safari project is a loose network of DJs, producers and cultural activists who aim to inject life into the underground electronic dance music scene in East Africa. On the other, Southern Africa’s Wired for Sound project set out to work with musicians in remote areas to bring exposure, opportunities to collaborate with more established artists, and educate about the realities of youth culture through music. The Con asked them a few questions about how they work.

Wired for Sound works with community radio stations and local musicians, young and old, who are keen to create and collaborate. We workshop and record the music, and organise photo shoots, after which the radio station hosts a live discussion, plays snippets of each recording and interviews all involved about the music and the artists’ thoughts and aspirations.

The project started as an add-on to Sauti za Busara festival in Zanzibar. We felt that African ‘roots’ festivals, although incredibly important in supporting traditional styles and musicians, didn’t allow enough emphasis on new electronic styles from the continent. What’s more, we saw an opportunity to provide a platform for contemporary producers to work with traditional musicians and develop a sound that both works in the club and presents a strong regional identity. We see DJs as the most important conduit for this – they act as cultural connectors drawing together different styles, audiences and experiences.

The groups travel around their respective areas of operation with a model in mind, adapting the methodology to suit the particular demands of each country. The results are always fascinating.

We decided to go home via Niassa (quite a detour) when we heard about a local village band of people inhabit the reserve: there is a population of around 40 000. The band’s leader, José, is a natural inventor – and in the past decade has put together a five-piece band, quite literally. Using wood from local trees, bicycle wire and calculator parts, José makes his own guitars complete with pick-ups; the band’s microphones are old hairdryers and brooms all connected to an old hi-fi system and a handmade amplifier. Their track made it on to the album and two of the members are travelling to Denmark on an all-expenses-paid cultural exchange later this year.

It was amazing to work with Makadem and Sarabi, two acts from very different ends of the spectrum, but equally vibrant and exciting. Makadem is a real artist – a deep man with a strong concept of his music, yet highly progressive about developing his sound in new directions. This meant that putting him together with Esa Williams (the South African DJ and producer based in London) and Ambrose Akwabi was a perfect fit – they bounced ideas and directions off each other to produce a really hypnotic and deep track that represents both East Africa and the global underground. Once the remixes are out, I think this one will get big in a lot of different places. Sarabi are a young band from Nairobi – not even 20 years old, and full of irrepressible energy, ideas and humour. They arrived at our makeshift studio on a campsite above Lake Naivasha and immediately started firing off idea after idea; it was hard to keep up, but we feel the track produced (Koko’s Vibration) captures their spirit really well.

Beyond the initial stages of research and making music, both projects take the collaborations a step further, with Santuri Safari changing up locations, styles and methods of recording. Wired for Sound partners with community radio stations and also makes sure each musician receives a copy of their own recording to use as a demo before taking the tracks back to South Africa for further collaboration with established musicians.

The most surprising aspect was that even in the most desperate environments, music continues to provide a means for social cohesion (village choirs), and musicians remain optimistic about the potential for opportunity further down the line, even if this means a potential only realised years in the future. There is a dedication and commitment to the craft, combined with innate talent, which was incredibly inspiring to witness, especially within some of the poorest communities we spent time in.

We were wondering in the first place how each element of the project would work together – would DJs who don’t produce be able to collaborate with musicians who have never been involved in DJ circles? Would our producers be able to tie everything together and would each element get the concept we are aiming for? In the end there was no need to worry – the way each individual has worked for a common goal of creating something in an open spirit of creative enterprise has been the biggest success and surprise of the project so far.

Financial considerations, the logistics of travelling, language, setting up equipment and getting people to participate can make the process difficult, but when it comes down to making music, it all becomes worth it.

The positive reception and support of the project by the artists themselves, our funders and those who love the music  has been hugely rewarding. During our trip through Mozambique, some of the artists went from a being a bit wary of yet another project rolling into town to realising that it was a chance to work with professionals, with quality equipment in interesting spaces; that it was an opportunity to share their work and also represent their community to a wider audience. And this has opened doors for some of the participating musicians who are now travelling overseas on the back of the project.

The most rewarding aspect is that moment when the studio is set up, and we see musicians and producers firing ideas back and forth to make great, interesting music. When the whole studio is grooving along to something really fresh, it’s a great moment. Also, performing and DJing the results to crowds at festivals and parties is intense – a great way to measure our success.

Some Pics from the road: Courtesy of Wired for Sound – Click on an image to see them in gallery form 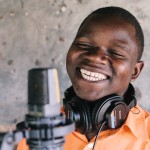 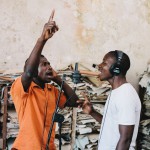 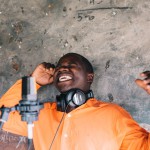 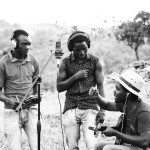 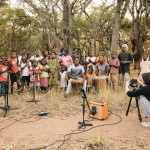 Santuri Safari heads for Bayimba in Kampala this month, and the Sondeka festival in Kenya in October. The project hopes to get experimental and work exclusively with recycled instruments and hybrid electronics made from parts found in local junkyards and markets.

Wired for Sound head for Malawi next, and has many plans for the music recorded, including a cross-continental music and cultural exchange in September.