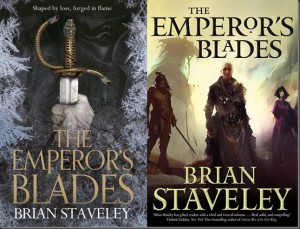 Staveley goes for triple whammy in his epic fantasy debut: the three children of the assassinated Annurian Emperor are, respectively, the acolyte of an ancient belief system; the female finance minister of a corrupt, intrigue-filled court, and a heroic captain in the Empire’s most feared fighting force. That’s three genre tropes in one, and to them we can add the almost-perennial Ancient Evil Rising.

That conceded, Staveley juggles his ingredients brilliantly. His characters live from the first page, and their distinctive characters and perspectives are beautifully contrasted. When their spheres intersect, those differences make for piquant interaction.

The world-building is careful and convincing, but not pedestrian: the giant flying birds that ferry the fighters around are fun, but also pose practical problems of warcraft to add meat to plot and context. Actions are anchored in a realistic framework of difference: class, gender and ethnic tensions are as much plot motors as giant-spider monsters and thoroughly de-romanticised elves.

If you’re seeking an exciting ride with rather more depth than usual, Staveley’s book is the one.