If you have M-Net, you’ve heard Polish-born trumpeter Tomasz Stańko’s music even if you don’t know it. A snip of his composition, Terminal 7, from the 2013 album Dark Eyes (ECM) was used as part of the soundtrack for the hit US espionage series Homeland. The Twittersphere at the time was abuzz with rumours that Stańko didn’t know it either, and that the music had been ripped off. But that, he says, is completely untrue. “I kind of knew. The filmmakers bought those few seconds from ECM; they did it properly. But once it left my hands, it was no longer my music, but rather that composer’s music. And I think his work is very fine. I accept that these days much modern music is collage – in fact, almost everything is collage these days! That’s the future. It’s positive, because it constantly creates fresh things from old things.”

In a period when the old guard everywhere bemoans aggregation, those might seem surprising sentiments from a 72-year-old. But “modernist” probably ought to be Stańko’s middle name: he’s been part of Poland’s creative avant-garde since the 1960s when it first stirred.

Rzeszów-born Stańko had a conventional and comfortable childhood. His father was a judge, “but also an extremely talented violinist, so he saw to it that my sister and I had music lessons”. Stańko studied piano and then violin, “but when I was about 14, I took a break. You know teenagers; they don’t like the path they’ve been set on.”

A few years later he was back in music, attempting what he thought of as jazz, though he now reflects he barely understood the genre then. “It just felt like that was the [musical] news.” In 1950s communist Poland, Western cultural imports were viewed with deep suspicion, and often censored. However, the filter of censorship had an interesting impact. Unlike some other Eastern Bloc countries, Poland was beginning to permit some European cultural imports: “We had a slightly special situation in Poland. Some films and translations of literature were permitted – but only the best. So we avoided the pulp.”

As Poland thawed a little, the young Stańko was increasingly drawn towards what was new in art, movies and literature: “Kafka, Faulkner; Italian neorealist movies, Fellini, Bergman, Godard … All my generation wanted to open up to Western culture, which to us was a synonym for freedom.” He had come to jazz more covertly: “I got my first good jazz education,” he says, “from Willis Conover and Voice of America. That was how I first heard Gerry Mulligan – imagine, he’s my neighbour now, in New York – and Chet Baker. My parents were asleep, so I had to listen like this:” (Stańko mimes his ear clamped to a small radio under the bedsheets). Then his expression softens with a memory: “And I came to Miles. And after that…”

However, the rest isn’t just history. For if Miles Davis opened Stańko’s ears to what the jazz of that era could really say, the young Pole also rapidly discovered even newer voices taking it forward, particularly Ornette Coleman.  The US embassy was beginning to bring in touring musicians and Stańko saw Dave Brubeck live in the late 1950s. In 1965, Cecil Taylor visited – “He got a standing ovation – can you imagine?” And then, “I had luck. A Polish-American came home for a visit. He told us about Ornette. And that, for us, became the bible.”

Stańko secured copies of two Ornette Coleman albums, The Shape of Jazz to Come and This is Our Music. “I wasn’t sure – what was this? I tried to play his changes with my band, and I recognised something different, but it was hard to pin down. But at the same time I was reading international jazz literature. And I read John Coltrane saying: if you want to build your music, then compose, so – this was about 1963 – I started to compose too.”

None of this was happening in a vacuum. Just as under the repression of apartheid in South Africa the jazz players and literati of Sophiatown and District Six were cultural heroes, so it was in Poland. “Jazz had prestige in Polish society,” Stańko remembers. “I think there was only one actual jazz club, in Kraków, but there were other places to play. Jazzmen could travel. We were a little community, with other creative figures: [pianist] Adam Macowicz, Roman Polanski, Krzysztof Komeda…”

It was with pianist and composer Komeda that Stańko began attracting international attention, particularly after their group recorded the 1965 album Astigmatic, which for many critics marked a decisive turning point in Polish jazz. Astigmatic’s sound veered from a largely American vernacular towards employing the language of jazz to say something distinctively and assertively Polish. Stańko worked in Komeda’s group from 1963 to 1967, while Komeda was also composing for filmmakers such as Polanski (Knife in the Water, 1962) and Andrzej Wajda.“Komeda was another piece of my luck,” reflects Stańko. “If you have personal contact with that kind of cat, I think you get the vibrations.”

Stańko did five tours with Komeda and recorded 11 albums with him. After Komeda left for Hollywood to join Polanski, the trumpeter formed other groups at home, as well as working with numerous international formations and individuals, including the Globe Unity Orchestra, The European Free Jazz Orchestra, Don Cherry, Finnish drummer Edward Vesala, Taj Mahal, Chico Freeman, Tony Oxley, Cecil Taylor and many more. In the mid-1970s he signed to Manfred Eichner’s ECM label and released the album Balladyna with bassist Dave Holland. 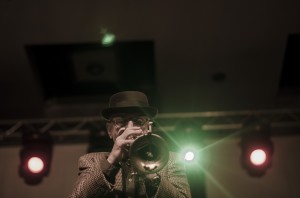 It was during this period that he had his first encounters with South African jazz. “At Club Montmartre in Copenhagen, Dollar Brand was playing upstairs. And in Switzerland I heard this amazing drummer, Makaya Ntshoko. I’ll remember these encounters for life. They were striking because of their originality. They had their own language. You heard Makaya’s drumming and you immediately said to yourself: this is something really different.”

It’s for that reason – as well as “it’s an honour to be in the country of Mandela” – that Stańko was happy to accept an invitation to play at the Joy of Jazz Festival last weekend with the Dark Eyes quintet. He regrets the visit had to be so brief; gazing out of the window of his hotel in Sandton he says wistfully; “I’d like to see the real Johannesburg, and more of the country. Tell me about the sea in Cape Town…”

Stańko values what he can see of a place, and draws inspiration as a composer from the visual. “My compositions are myself. But I get my inspiration from art, and from life. And from artists – for example, the questions someone like Gauguin asked through his work: who are we? Where are we going?” On Dark Eyes, the title is derived not from the lush Russian ballad of that name, but from a Kokoschka painting of Martha Hirsch. As for the mood of the album, and its melancholy feel, and he explains that, too, in visual terms: “I’m from the same country as Chopin, remember? And for me and the other musicians – two Finns; two Danes – we all come from countries where often there is light without sun, and that light, I think, is reflected in the sound.”

Stańko now splits his time between Poland and New York. On October 16 he’ll be back in his homeland working with Ravi Coltrane on a special commission for the Warsaw Jewish Museum. Meanwhile, he’s still working on material for his planned 2015 recording for ECM, with his New York quartet. Those South Africans who cheered his fiery staccato splutters, jagged runs and misty, Miles-like lyrical meditations at Joy of Jazz hope he’ll find time for a return visit here, too. It is, after all, one of the wellsprings of his inspiration: “Aesthetically, my roots are in African-American art. For me, that’s still the music of the future. It offers a new kind of vibration. Classical compositions become old, but in Africa, everything is reborn: it vibrates for all the world.”